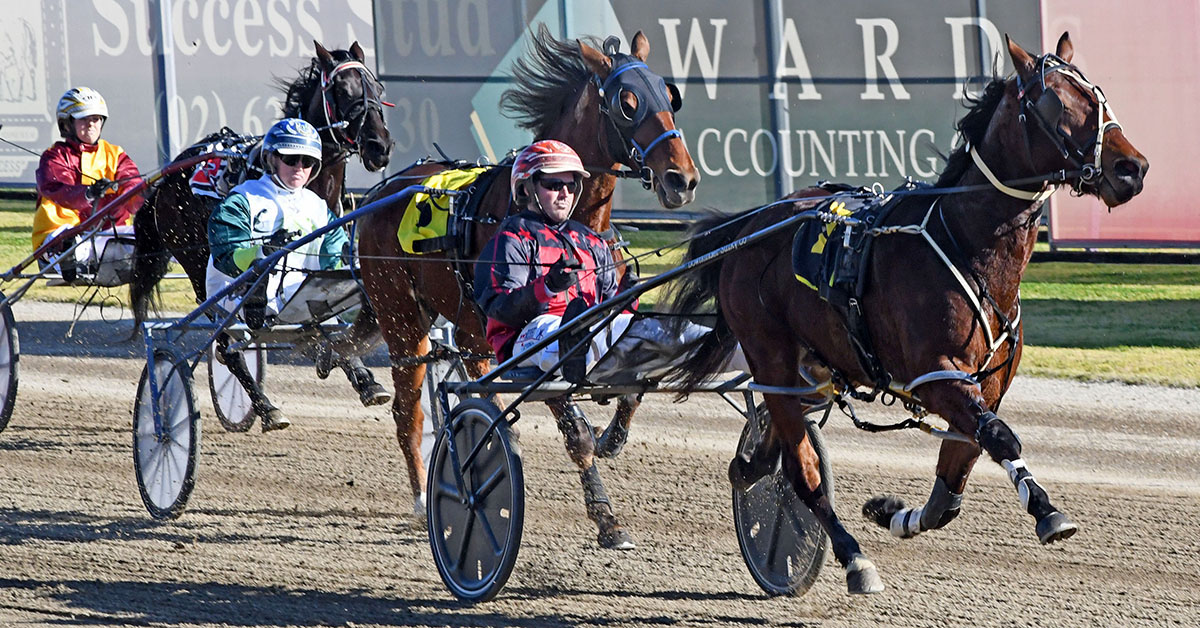 KEENER THAN EVER: Robbie Morris lands another winner at his beloved Menangle

Robbie Morris18
YOU’D think after landing 1600 winners, with an amazing percentage of a placegetter every four drives, you might start to slow down a little....

YOU’D think after landing 1600 winners, with an amazing percentage of a placegetter every four drives, you might start to slow down a little.

The champion young reinsman turned 30 last week and did it by landing a winner on his first drive for the night, getting Ziggy Rocks home at Menangle on Saturday night.

Then he wasted no time chalking up the 1600th success when he scored with Polka Delight at the premier track on Tuesday.

After more than 14 years in the sulky, you could almost call Morris a young veteran these days.

But the truth is, Morris has never been keener. And only COVID-19 has slowed his weekly progression into the winners’ circle down a fraction.

“Covid has forced me to only race Tuesdays, Thursdays and Saturdays so I do get the chance to watch Friday night footy with my son Archie,” he said.

“Normally I’d be heading for Newcastle on a Friday night.”

Morris admits landing 1600 winners was probably the furthest thing from his mind when he landed that first winner, at Penrith.

“I said to someone the other day, you don’t realize how quickly life, in general, slips by,” he said.

“Having kids has made me realize you have to enjoy every day you can.

“How quick does it go?

“In this industry you don’t get much of a chance to look back, because the next day rolls in.

“I still have the same hunger to drive a winner today as I did when I was 16. And I’ve had a lot of drives in that time.”

Morris rates young reinsman Josh Gallagher, also one of his stable’s foreman as among his best mates.

“But what happens out there stays out there and we love challenging each other. We’ve got a great relationship.

“He enjoys beating me – and I do love returning serve.”

Morris did take a little time to reflect on his amazing career after landing win No 1600 on Tuesday.

“I have to thank some great trainers – and owners – who have put me on over the years,” he said.

“To be honest, I’ve driven a lot of very very good horses and won some nice races. I’ve driven two group 1s this year . . . The Black Prince and The Choreographer.

“But looking back Charlaval was one that stand out as being pretty special.

“The reason I say that is because we had him from a baby, Kerry trained him and did a lot of work with him and he wasn’t easy early on, but winning the Breeders Challenge that year was really a good all-round, great team effort.

So, if Morris was 80 years old and I offered him one last drive – what horse would it be and what track would he drive?

“Heck, there’s been a lot of good horses in my years – lots,” he said.

“But if I had to tie myself down, honestly, I reckon Christian Cullen – and I know I’m probably showing my age a bit here, at 30 – but what he did I don’t think I’ll ever see again. The way he dropped those good horses the way he did in the Miracle Mile was pretty special.”

“I’d have to go Christian Cullen at Menangle.”

There have been more highs than lows and in the 10,830-plus odd drives, Morris has probably had about 15 falls.

He fractured an ankle and badly dislocated it, broke a collarbone although still rates himself as been fortunate to have had few accidents.

There have been some great nights with plenty of trebles and fours but the Breeders Challenge when he won two group ones in the one day and won four races, also stands out.

His father Peter, himself a former champion reinsman, still gives his share of advice.

“He definitely tells me when he thinks I’ve slaughtered one and some days he even goes the silent treatment,” laughs Morris.

“He’s like any father, I guess, he just wants to see his kids do well.

“While Dad has been a force, I wouldn’t be where I am today without Mum and KerryAnn. For the past 13 or 14 years, between them, they have me pretty-well organized. I can just get out there and do my job.”

“I’m getting a lot of quality but would like to win a few of the bigger ones and tick off a few of those bigger races now. I’d love to win an Inter Dominion like my Dad did and maybe a few other big races,” he said.

“I’d love to win a premiership. I’ve run second or third more times than I care to remember.

“What I am proud about my whole career now is the consistency – every year we’ve been able to turn out 100 to 150 winners and we’re always in the top two or three in the premiership. And that’s a feat in itself.”

If Morris has any spare time these days he loves a game of golf with Josh Gallagher or maybe watching the footy and having a kick with his son Archie.

“Spending time with Kerry, Archie and Stella these days – that’s the go,” he said.

“It’s sure different having a little girl around. She changes fatherhood, that’s for sure.” 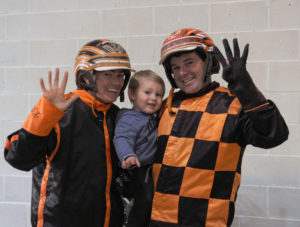 FAMILY MAN: KerryAnn and Robbie Morris with their son Archie celebrate one of their many massive days at Menangle.

It could be some Consolation for Morris and Roots
Robbie has the last laugh . . . this time
CHARLAVAL
Jump in class
About author