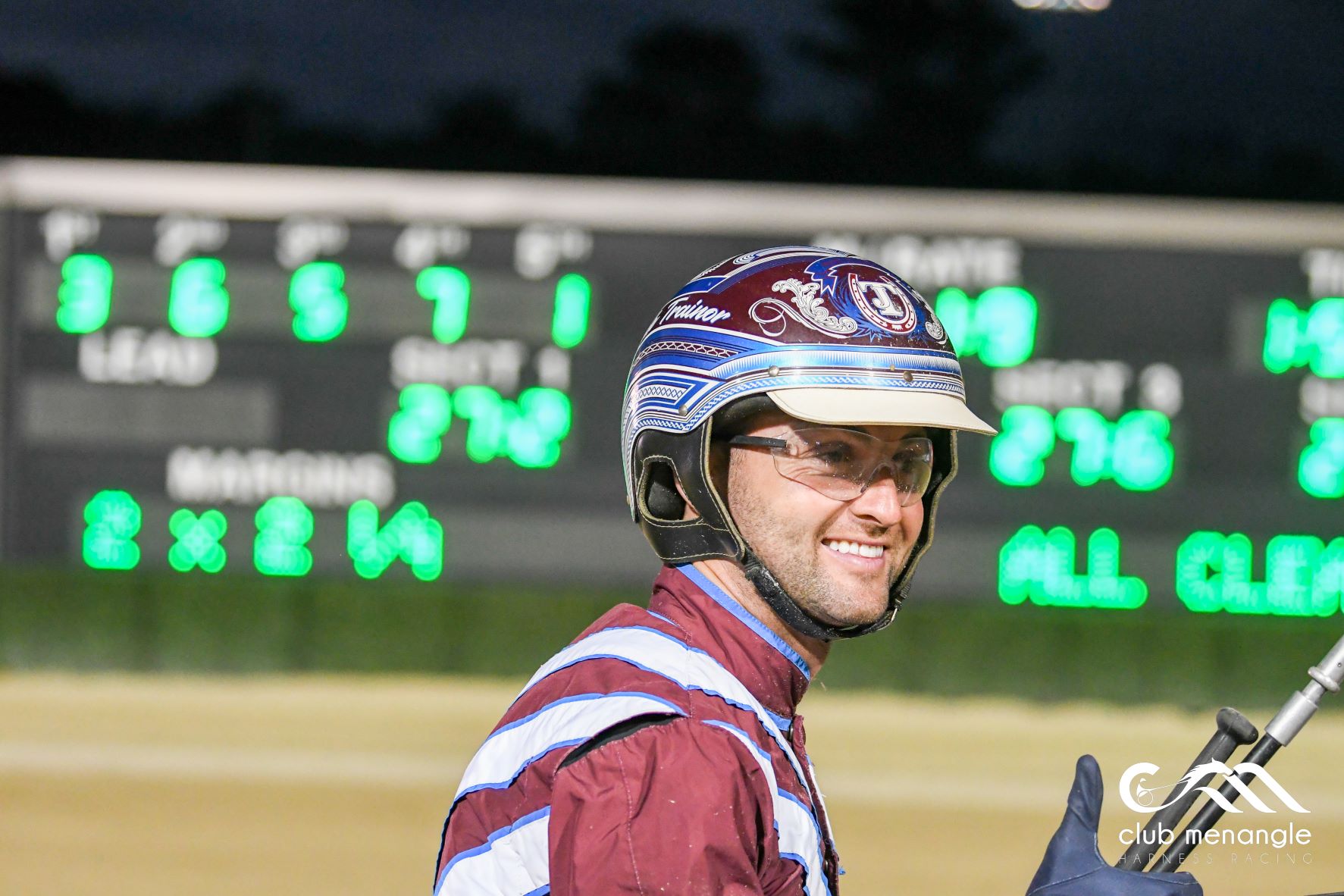 MAKING HIS MARK: Jack Trainor all smiles after his treble on Saturday night.

LEADING Menangle horseman Jack Trainor has just three runners at Menangle this afternoon and will rely on young reinsman Jack Brown to handle two of them.

Yet the former Kiwi continues to come up trumps when it comes to stable newcomers and will look to continue his winning streak in the sulky with another relative newcomer Iambecauseofyou, a lightly-raced gelding having just his fourth start for the stable when he contests Race 5, the Evekare Assisted Living Pace over 1609m.

Iambecauseofyou has not been seen at the trials and hasn’t raced since September last year when ninth in a heat of the Breeders Challenge at Penrith behind My Ultimate Ronnie.

A winner of two of his 10 starts, Iambecauseofyou did cop a check in that race, losing all chance, but obviously has ability as his two earlier wins for his former trainer Darren Reay indicated and consequently has been installed a $2.50 early favourite for today’s assignment.

Trainor has two in the race, with Jack Brown to pilot Modern Attitude, the second favourite, with exciting young reinsman also aboard Iylac Beach, who’ll be chasing a hat-trick in the final race where he’ll have to contend with the impressive Double Act, from the Harry Martin stable.

Still, it was Trainor’s winning treble in successive races on Saturday night at Menangle that had everyone talking.

Trainor landed Royal Gamble a strong winner for Mark Callaghan before scoring on two of his own team, Stylish Memphis and B K Swy.

The win of Stylish Memphis in the P. J. Hall Memorial in a quick 1:51.9 excited the easy-going horseman.

“I know it’s a big call but I think this mare may have come back even better than she was last year.”

Indicating that Stylish Memphis would be set for the Ladyship Mile again, Trainor said another shot at the Miracle Mile with the mare would be a bonus.

“We may have gone to the next level again with this horse,” he said.

“I’ve only had her back here for two weeks but Mark Jones has done all the hard work with her in New Zealand and she is a credit to him.

“She had every right to only finish second to Mach Da Vinci tonight but at no stage did she give up and was really strong to the line.”

Trainor excited about his double shot at glory
Ready to salute at The Big M
Jack’s just ‘Mr Consistency’ the...
The boys are back in town
About author