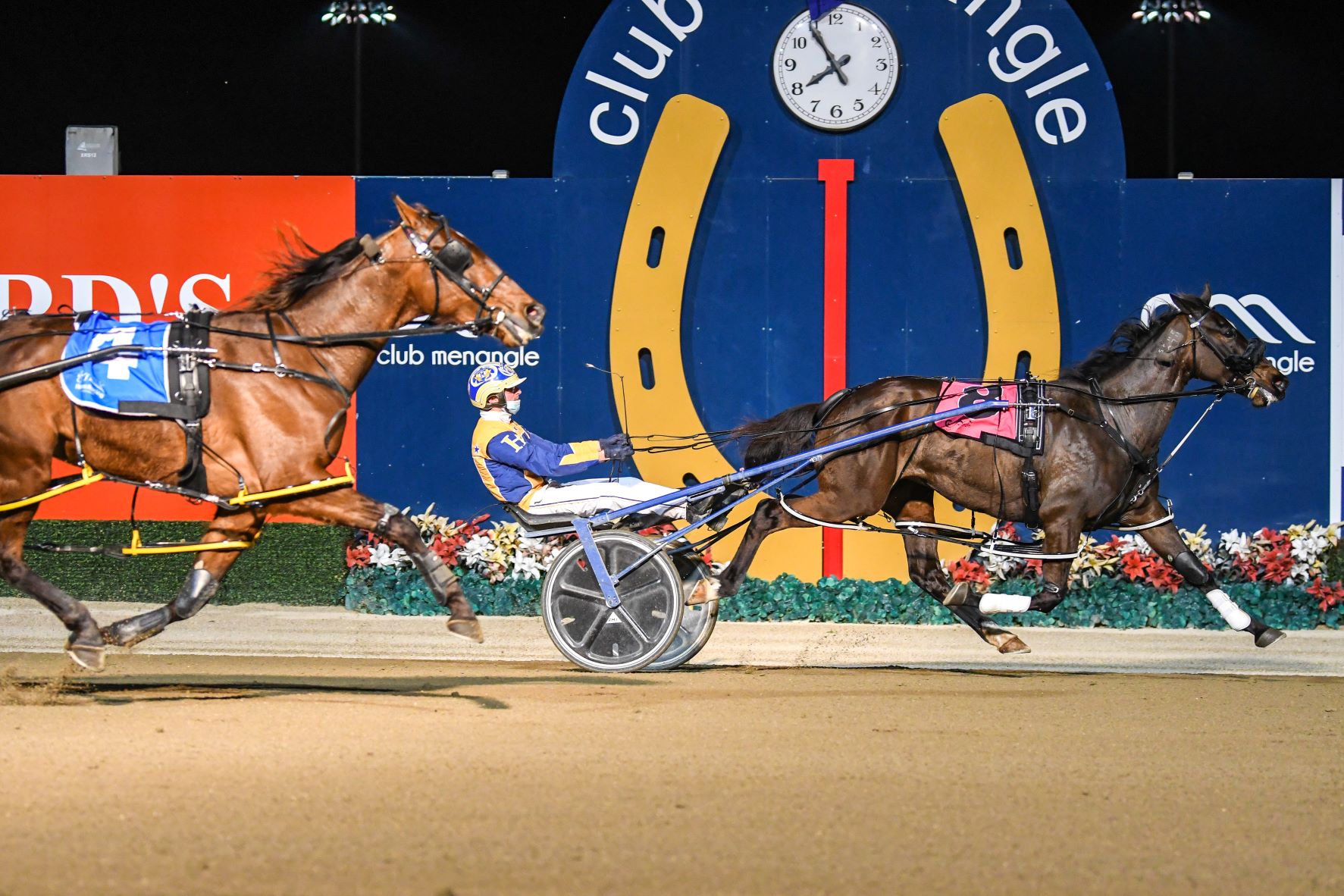 Cameron Hart23 Rocknroll Angel2
IT’S not too often that a reinsman currently campaigning almost 16,000 kilometres away can take some of the credit. Yet former Riverina reinsman Cameron...

IT’S not too often that a reinsman currently campaigning almost 16,000 kilometres away can take some of the credit.

Yet former Riverina reinsman Cameron Hart was happy to share the plaudits after landing a winning double at Menangle on Saturday night . . . and backing that up with another winning double at the south-western Sydney circuit on Tuesday afternoon.

With 125 winners already this season – 10 more than Jack Trainor and 20 more than Amanda Turnbull, even Hart admits he is a little “overwhelmed” by the amount of success he has enjoyed this year.

And while champion reinsman Todd McCarthy seemingly lands winner after winner in the US and Canada, Hart was happy to attribute some of his extraordinary success to the youngest of the three McCarthy brothers.

“When Todd made the decision to head for the US to compete, it certainly gave me plenty of new opportunities and I am pleased to say I have been able to make the most of them,” said Hart.

While the majority of those winners have been for three stables . . . Jason Grimson, Rickie Alchin and David Waite, Hart has also become a favourite for the ‘boutique’ trainers as well and has landed winners for at least 26 other stables while adding to his extraordinary strike rate this season.

He landed another feature on Saturday night with an all-the-way win aboard the talented mare Rocknroll Angel, a slashing 1:51.3 effort to defeat Uroc Skinny Jeans (Jack Callaghan) and Queenofdance (Darren Binskin) in the Group 3 $30,600 Ladyship Stakes, careering away to win by two and a half metres with another eight metres to the third placegetter.

Trained by another former Riverina horseman in Jason Grimson, Rocknroll Angel has won five races from 13 starts since rejoining that Menangle team after a short stint with the David Aiken stable in November last year.

And despite the fact she has had 89 starts, for 21 wins, Hart hinted we may be yet to see the best of her.

“She’s a lovely mare to drive and she likes to go fast,” said Hart after Saturday night’s win.

“After a good fifth in the Ladyship Mile early this year, she has not had a lot of luck with barrier draws and I really think she could get away with one of the bigger mares’ features if she had the right draw.

“I was pleased to see that connections have decided to race on with her for at least another season.

“Obviously the barrier draws make such a big difference in the big races and from a good draw I really think she could take some catching.

“She loves to get in front and she rolls along at a good clip.

“And she has continued to show up and prove that she’s up to it.”

Hart seldom gets carried away and is a cool customer on and off the track.

But even he had to admit he was impressed with the improvement from four-year-old square-gaiter Indefensible, who scored a stunning 15-metre win over Lord Lohki and Agent Maori at Menangle on Saturday night.

With trainer-driver Rickie Alchin still away campaigning in Queensland, Hart says much of the credit had to go to Alchin’s stable foreman Ricky Hunt, who had done much of the work with the gelded son of American stallion Armbro Variable.

“He really gave me a good feel the other night and has jumped out of the ground as far as improvement,” said Hart.

“Ricky Hunt has done a super job with him and after he ran a couple of handy Tuesday afternoon races, he decided to throw him in the deep end and give him a crack at the Saturday night trot.

“And gee, he really went well.”

Hart says all he wants to do now is keep the good run going.

“I have had such great support from everyone and I want that to just keep rolling on, if possible,” he said.

“Sometimes it’s hard to balance the drives between the big stables and the smaller ones.

“While its great helping the bigger ones out, I still like to stick by the smaller ones as well.

“It’s always special to get a winner for the smaller trainers as they get such a thrill out of it.”

Hart kept his amazing strike rate intact when he landed impressive filly Madrid a winner for Jarrod Alchin on Tuesday and backed up later in the day to score with The Raconteur, increasing his margin over Jack Trainor who resumed from suspension but failed to land a winner.

He’s already eyeing 100 winners for the seas...
Young guns have their sights on the Kiwis
Cam’s looking to keep the excitment brewing
Another treble on the cards
About author