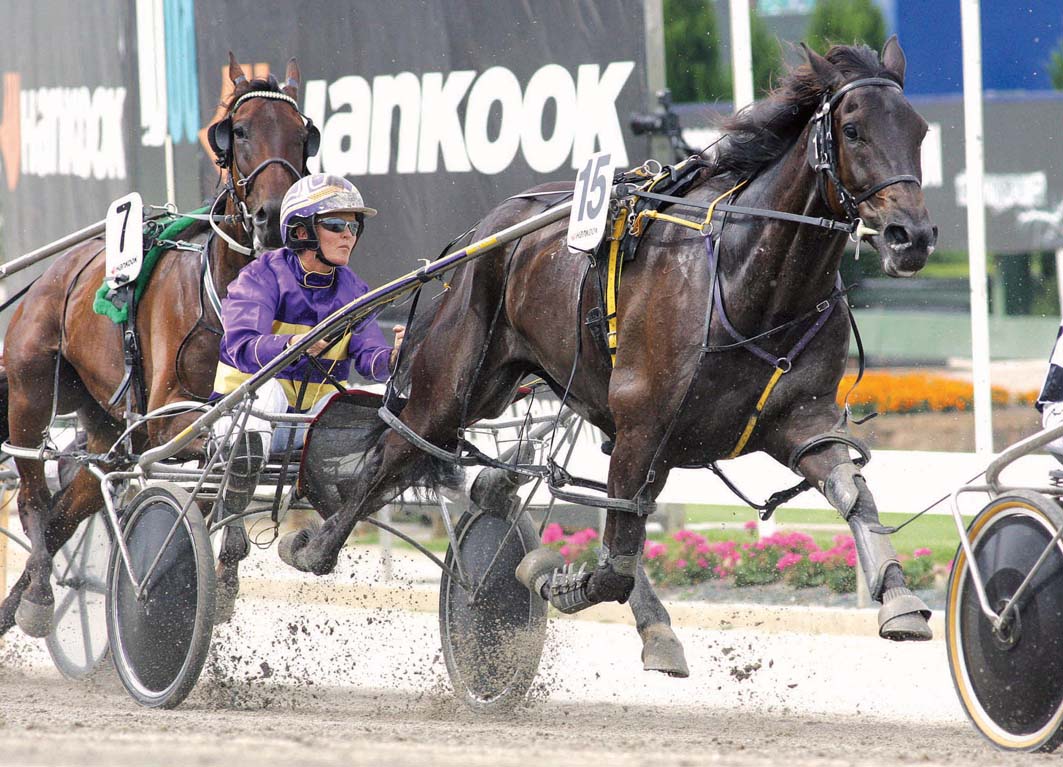 OUR ULTIMATE CHAMPION: Blacks A Fake with Natalie Rasmussen aboard.

IT takes at least three gruelling weeks of harness racing to win an Inter Dominion series.

And it’s fair to say Queensland champion Blacks A Fake, a four-time winner of the great event, never shirked his task and his trainer-driver Natalie Rasmussen was never frightened to travel near and far to show Australasia just how great her standardbred gelding was between 2006 and 2010.

Now Blacks A Fake has added another notch to his belt this week, capping two weeks of match racing before being declared the winner of the inaugural The Ultimate Inter Dominion: Virtual Series.

For the past three weeks, 16 of the greatest Inter Dom performers in history have slugged it out head-to-head in a series of match races that eventually led into a dream grand final, which pitted ‘Blackie’ up against Western Australia’s mighty three-time Inter Dominion winner Im Themightyquinn.

And it was the sheer weight of public voting that got Blacks A Fake over the line as the virtual series champion.

That was great news for Kathryn Clennell, who correctly selected Blacks A Fake as The Ultimate Inter Dominion: Virtual Series champion.

Kathryn won the grand prize, which included two VIP tickets to the 2021 Inter Dominion, valued at $500.

So how would the grand final unfold?

When the green light twinkled on the mobile, Im Themightyquinn, with Greg Hall junior in the bike, used a strong display of gate speed to cross to the pegs and keep his rival at bay.

But in what could only be described as the toughness of a ‘Maroon’, the Queensland champion, Blacks A Fake overcame a difficult trip outside the leader to sprint away to a dominant victory.

Naturally, as these two champions returned to scale from their match-race, the crowd erupted in cheers as a tribute to two of the best . . . two pacers that earned more than $4million apiece and won seven of the eight Inter Dominion contested between 2006 and 2013.

Amazingly, they never faced each other once . . . until now in The Ultimate Inter Dominion: Virtual Series Grand Final.

Blacks A Fake now reigns not only as a four-time Inter Dominion winner but also as the champion of champions as decided by harness racing fans from across Australasia in The Ultimate Inter Dominion: Virtual Series. A testament to his determination, stamina and grit that was adored by his legion of supporters.

The Ultimate Inter Dominion Virtual Series was a tribute to the great history of harness racing.

It was a fantastic series to pull together and watch the passion of the fans shine through.

With fans unable to attend tracks across the country, this was a way to enhance the love of the sport and connect the wider harness racing community.

He shows all the ‘Hall’marks of greatn...
TAB Constellations – the new star of Australian Ha...
About author