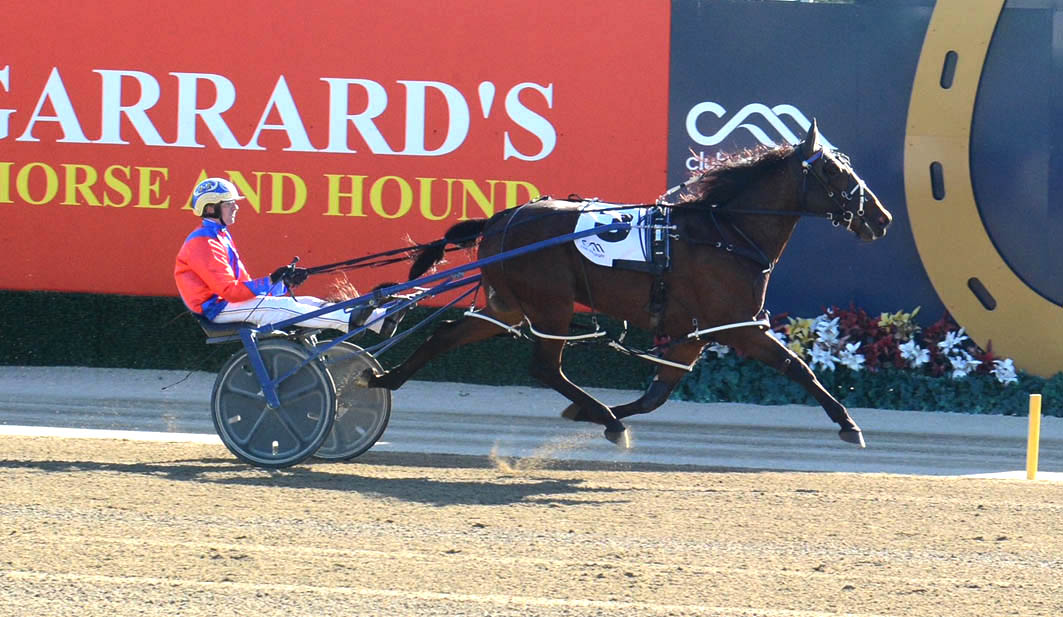 HE gives you next to nothing on the training track, but when it comes to racing, it seems My Ultimate Byron is in a class of his own.

The youngster gave a much-more experienced bunch of rivals a serious touch-up at Menangle on Tuesday, romping away to beat New Yorker and Yankee Ideal by a conservative 12 metres in a 1:52.8-mile rate.

Trainer Jarrod Alchin has been experiencing something of a resurgence in his driving career but prefers to hand the reins to our leading NSW reinsman Cameron Hart when it comes to My Ultimate Byron.

And the Somebeachsomewhere gelding showed he will be the one to beat in the upcoming Breeders Challenge when he scored the easiest of wins on Tuesday.

He was the bright spot at a meeting which saw our form reinsmen share the wins around with Robbie Morris landing a winning double to almost steal the show.

Josh Gallagher landed a winner to go with his double from the previous night at Menangle, while Jack Callaghan landed a double on Monday night and Darren Binskin? Well, he just keeps rolling on and on.

Binskin’s strike rate is quite extraordinary in recent weeks and although in his early 60s, he’s as competitive as ever and landed a winner on Monday night with Ardens Ace and backed that up to score with Shanlou at Menangle on Tuesday afternoon.

Still My Ultimate Byron was the talk of the town and will be set for the Breeders Challenge as Alchin looks to keep his impressive young team apart in an effort to have them all competing at Menangle on finals day.

“The horse is really well within himself and following his last start, Cam said he felt as good as he’s ever felt, which is promising,” Alchin told Harness Racing NSW.

“He’s actually a hard horse to train because he is not a good trackworker so you really don’t know how well he is going.

“He was good first-up at Penrith without a trial, he just did what he had to.

“He will strip fitter again following this run and won’t be too far from peak fitness by the time his Breeders Challenge heat comes around.”

Alchin’s major owners, Tumby Park, have their best team of youngsters for some time.

Besides My Ultimate Byron there’s My Ultimate Cobber, My Ultimate Ronnie and My Ultimate Skeeta as well as his promising filly Madrid, owned and bred by Frank O’Sullivan that already has the Group 3 APG Gold Sovereign for two-year-old fillies on her resume.

“With five horses for the series I will try to split them among the heats at Penrith and Menangle,” said Alchin.

Unleashing the Breeders Challenge big guns
‘Ultimate’ lesser lights get a chance ...
The Ultimate night to remember for Cam
Bring on the BC Finals, says Cam
About author