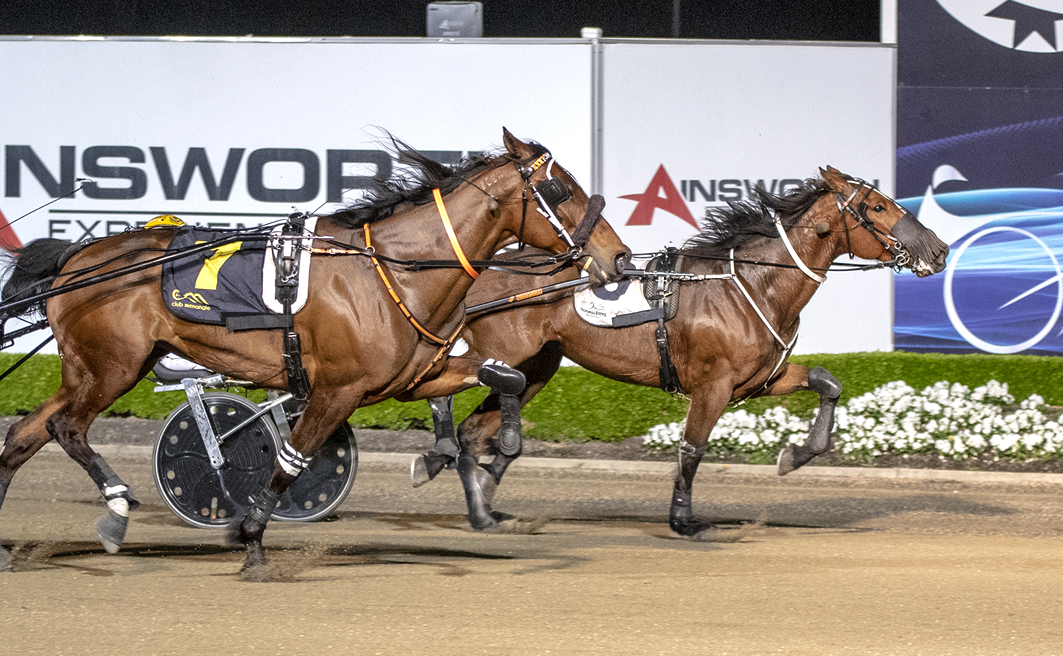 AMANDAS SPUR on the inside - Photo Ashlea Brennan

THERE is more at stake than the prize money for the bulk of Sunday’s Australian Franco Trotters’ Cup field. With 10 runners in the...

THERE is more at stake than the prize money for the bulk of Sunday’s Australian Franco Trotters’ Cup field.

With 10 runners in the Tabcorp Park Menangle-based feature chasing a berth in the Trotters’ Inter Dominion, the Group Two could be their last chance to make a serious dent on the rankings.

Only Touch Monarch is well within the cut-off for the prestigious series, which is due to begin with heats in Melton on December 1.

Facing a 20-metre handicap on the weekend, Tough Monarch was listed at 12 on the second round rankings released by Harness Racing Victoria last week.

As for the other nine, success in the feature will certainly boost their aspiration ahead of the third rankings on October 31.

One team banking on solid results in the 2300-metre stand is the Joe and Mary Rando stable.

The prominent couple have five representatives engaged with each in desperate need of a strong result to keep their Inter Dominion prospects alive.

Faring best of the squad in barriers one and two, Sunset Tour and Mighty Sunny are the lowest ranked runners for the Randos – and in the field – at 76 and 71.

“Sunset Tour is the little lurker which will be waiting for his chance if it’s a truly run race,” Joe said.

“If Mighty Sunny can run up to the form of his win three starts back he will be very hard to pass.”

Drawn the outside of the second row as a result of his ODS status, Rompers Monarchy will need to be on her best behaviour to improve from 50.

“If she steps away, Rompers Monarchy will be a big chance based on her run last Saturday,” Joe said. “She was tested the whole way and her run was enormous.

“She came home, licked her bin clean and has been great since.”

A last-start winner, following three placings in his four starts for the couple, Kowhai Monarch certainly has his chance to impress selectors from barrier five.

The son of Monarchy sits on 69 – one ahead of Amandas Spur, which rounds out the ‘Rando reps’.

Also a recent addition to the stable, Amandas Spur has a win and two seconds from his three Australian starts.

“On his run last Tuesday they will know Kowhai Monarch is there,” Joes said.

“He is ODS from his New Zealand days, but if Amandas Spur steps well he’ll be right in it.

“He has trained on better than any of them and is going to be a big chance.”