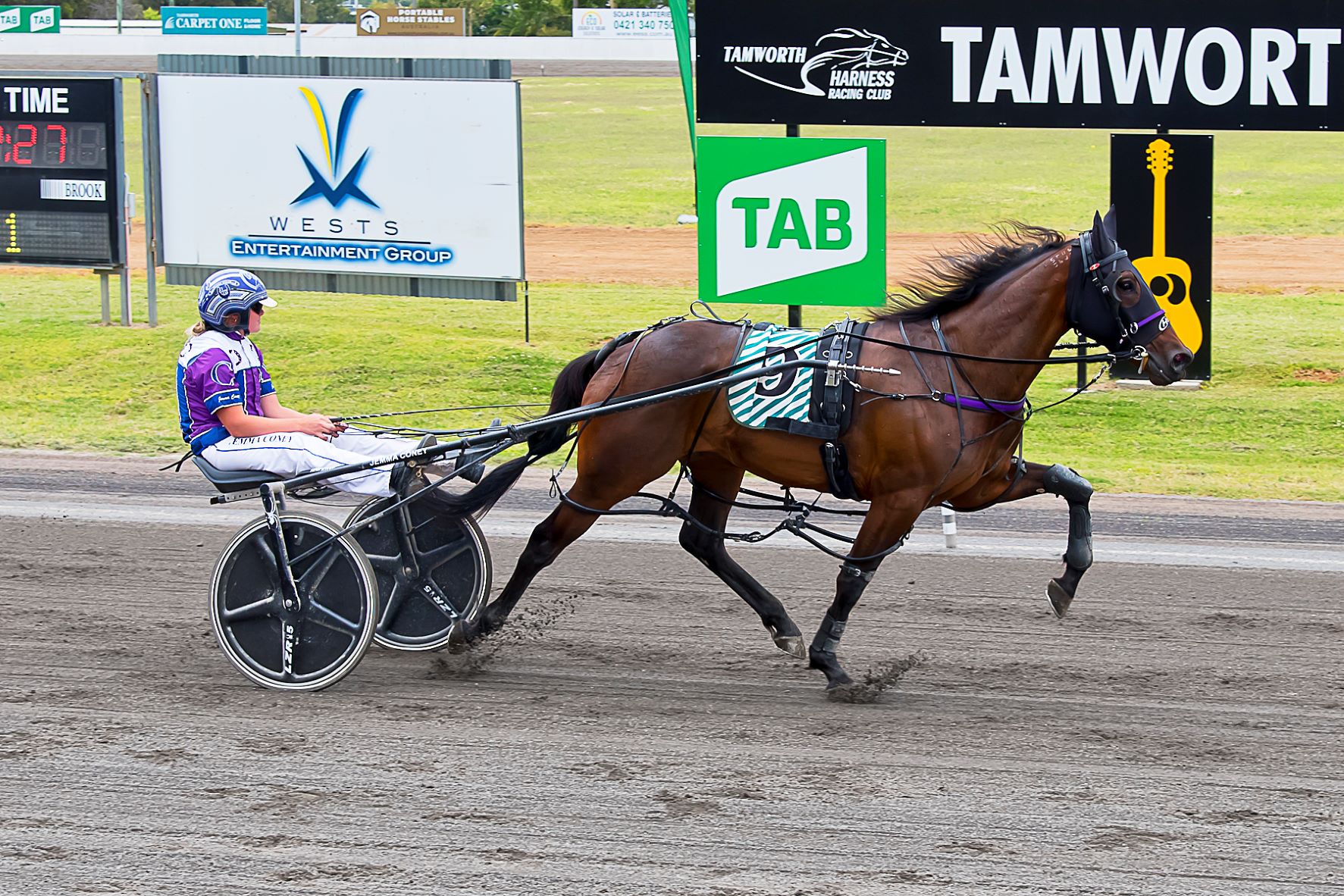 BUSY NIGHT: Runfromterror will be one of Gemma Coney's big hopes at Tamworth on Friday night. PHOTO: Peter Mac Photography.

Coney primed for her first crack at Tamworth feature

Jemma Coney5 Rocknroll Max1
JEMMA Coney is armed and ready for Friday night’s big Carnival of Cups meeting at Tamworth. Top of the hit parade is the 38th...

JEMMA Coney is armed and ready for Friday night’s big Carnival of Cups meeting at Tamworth.

Coney has drawn perfectly in barrier one with the Ty Robson trained Rocknroll Max.

“I am a bit excited to be in the race as it is a feature race and it’s on my home track,” said Coney.

Contesting just her second season of competition, 19-year-old Coney has already landed 65 winners to date . . . and is poised to make her debut in a Golden Guitar Final.

“He went well last week – he copped a bit of mid-race pressure but he has the good draw again this week,” said Coney.

“Last week was the horse’s first run for a month so he should strip fitter for the final.

“Ty (Robson) has been loyal to me, giving me the drives with this horse so I am grateful for that.”

Coney and Rocknroll Max have combined six times at Tamworth paceway with the gelding latest run when beaten 5.6m in the Multiquip Transport Golden Guitar first heat by the Michael Formosa trained and driven Ultimate Force.

“The horse on his back (Ultimate Force) had the sweet sit,” said Coney after Rocknroll Max led the field until Ultimate Force gained a split on the final turn.

After a quick study of the formguide, Coney suggests the speed will be on from the outset in the Final.

Local chances in the race will come from the Dean Chapple-trained Asterism and Overthemoon from the Andy Ison stables while Tony Missen is awaiting his chance for a run after Dubrobbin was made the first emergency. The rest of the field consists of Hunter Valley and Sydney horses.

“The first three horses all have good gate speed so my horse will benefit from that,” added Coney.

“It is a nice field and all the horses on the back row go well.

“My horse has led pretty easily from the one barrier before.”

Jemma Coney also views the Golden Guitar Final as a race of “tactics”.

“I think the winner will come from which ever driver adopts the smartest tactics in the race,” she said.

And how will Jemma Coney feel if she is the first to greet the judge in the 1980 metre final?

“I never thought I would be driving in a Golden Guitar Final,” said Coney.

“But it would be nice to win it – I think that would be amazing.”

Jemma Coney will be joined by another 19-year-old female who is also driving in her first Golden Guitar final, Grace Panella, who takes the drive behind the Clayton Harmey-trained Johnson Step from the eight barrier.

Clayton Harmey trained the winner of the 2020 running of the Golden Guitar Final with Wet My Whistle while Grace Panella has a connection with her sister Lauren Tritton driving Mach Beauty to victory in the time-honoured feature in 2013.

Jemma Coney has six drives on the program including Roger That in the $10,000 KTR Standardbred Stud Dash For Cash, trained by her father Greg and Mighty Flying Deal for the Richard Williams stables in the $12,000 Garrard’s Tamworth City Cup.

Jemma’s setting her sights on a treble
Jemma turns mud into gold . . . and ‘teal...
Britney Jane looking for a Gold ‘rush’
Jemma has her eye on a century
About author