HISTORY all but repeated itself at Globe Derby during the running of last night’s South Australia Derby. As the field approached the bell, Im...

HISTORY all but repeated itself at Globe Derby during the running of last night’s South Australia Derby.

As the field approached the bell, Im Sir Blake which had been over racing, choked down crashing to the track which saw Major Exclusive and Culture King also tumble while Perfect Major’s driver, Gavin Lang, was dislodged from the sulky.

Hitting the ground hard, Dani Hill – who was partnering Im Sir Blake – was then squashed by Major Exclusive before Culture King ran into the pair catapulting reinsman Paul Cavallaro 10 metres into the air.

While Darby McGuigan behind Major Exclusive and Lang escaped injury, Hill and Cavallaro were taken to hospital with several concerns.

Undergoing surgery as this article was written, Hill has broken her tibia close to her knee.

Along with the break, Hill will require a knee reconstruction.

With her leg to be pinned and placed in a brace for “about six month”, Hill is facing a minimum year on the sidelines according to her partner, David Harding.

“She is in a pretty bad way,” Harding said. “They are operating on her right now.

“Her leg is broken just below the knee so that is the main concern for now.

“After that she will require a knee reconstruction as she has damaged the ligaments around that.

“Whether she drives again it is too early to care about, but she will be out of driving for at least a year.”

Onlookers, track attendants and her peers were in awe of Hill’s intestinal fortitude and presence of mind to drag herself along the ground to lay on top of Im Sir Blake to keep him calm – all while in immense agony!

Also due to enter the operating theatre today, Cavallaro has sustained a “shattered nose” and three breaks in his wrist along with severe lacerations to his face which will require plastic surgery. 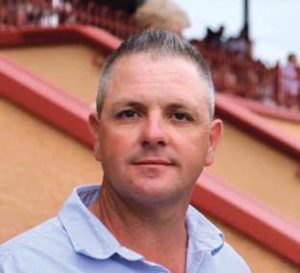 “Paul is in a pretty bad way,” Cavallaro’s father, Neil, said. “He will need three surgeries for his injuries.

“His wrist is broken in several places, he has a shattered nose and his cheek and mouth are in need of plastic surgery.

“It will be at least two months before he will be able to get back to driving.”

In May 2010 Hill and Cavallaro were in a serious accident at almost the same position on the track.

Hill was holding the reins behind Puaxtacy which choked and fell leaving Cavallaro driving Il Sogno – the only horse trailing Hill – no chance of avoiding impact.