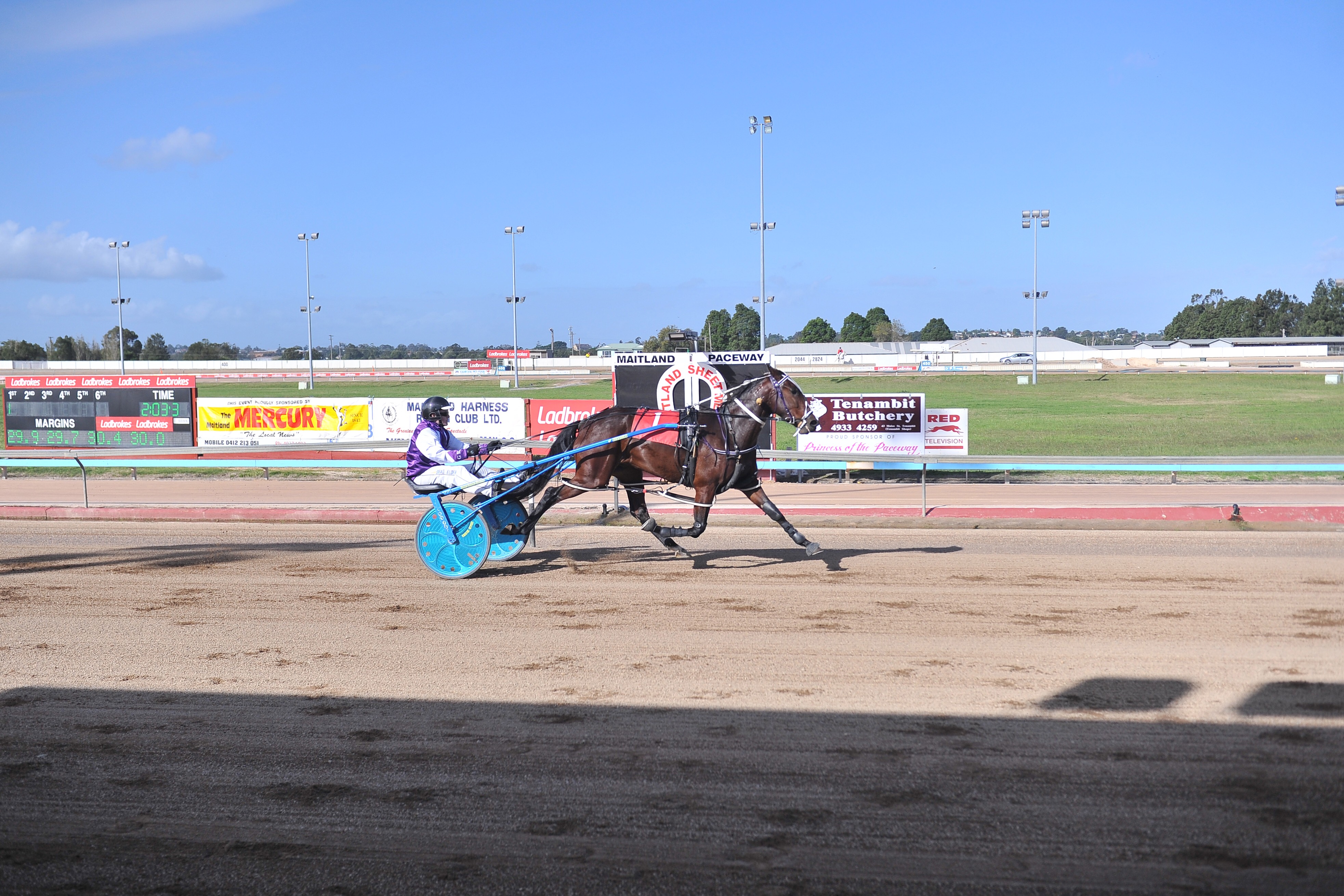 ELDER KNOWS HOW TO FIND A WINNER

BRAD Elder is always driving a winner for “the battler” . . . or so he says. And this week’s Maitland meeting was no...

BRAD Elder is always driving a winner for “the battler” . . . or so he says.

And this week’s Maitland meeting was no exception.

Elder bookended the meeting onh is home track and handed winners firstly to Tamworth trainer Greg Coney with Watts Up Letsplay in the opening event and Limousine Livia for Narrabri trainer Jarred Hetherington in the last of the day.

“Greg (Coney) and I have had a pretty good run together – we have had plenty of winners from not many starters” said Elder.

Watts Up Letsplay had it all her own way out in front after beginning from the pole.

“She began well and held out Tahminda – I thought that was the horse to beat,” said Elder.

Travelling up the back on the final occasion Watts Up Letsplay came away from the field to have a 13.7m win over Final River (Rod Atkins) with Bella Stella (Cameron Davies) five metres away third.

“I let her roll up the back and I don’t think I touched her at all – that is the first time I have had the drive behind her.”

The Shadow Play–Cheeky Cheeky filly was breaking through for her first career win from 18 starts in taking out the Kevin & Kay Seymour Appreciation Three-Year-Old Fillies Pace.

Elder then looked as if he had a chance of another win in the following event when leading with Stitch.

“I could have had a win there but I started pulling up when I heard the sirens and the race was called off because of the fall behind.”

The race was declared a non-race after a fall with Maitland reinswoman Lilly Hosking conveyed to hospital before being given the all-clear.

Elder then wrapped up the meeting with a win in the last – the Aussie Maitland Pace with Limousine Livia.

“She has won two in a row,” said Elder of the Artistic Fella-Limousine Lace mare.

“They were good runs. She won a heat of the Menangle Country series at Newcastle on Saturday night.

“She found the breeze there and pulled away from them – she felt strong going to the line and now she is heading to Menangle.”

Limousine Livia scored a 4.1m win in the Club Menangle Where Horses Fly Heat at Newcastle after finishing third to Last Party in a prior Menangle Heat run at Tamworth the week before.

“I’m not sure if I will have the Menangle drive as the Newcastle Mile is on the same night,” said Elder who will be looking to take the drive behind Shannonsablast from the family stables.

The Newcastle win saw Limousine Livia carve out a mile rate of 1.58 for 1609m before heading to Maitland on Monday.

“The Maitland win was probably her toughest win,” said Elder with Limousine Livia beginning from the four barrier.

“She (Limousine Livia) copped a check at the start and was 50 metres from the leader. When they slowed up I took off and found the top.

“She is a headache – she did a lot of things wrong early in her career and you have to nurse her in the race but I am starting to get the hang of her.”

Brad Elder has had seven drives behind Limousine Livia so is most certainly starting to get the feel of the mare.

“I think she has won five of her last six and I have been on her for four of them,” added Elder.

Although Brad Elder does the stable driving for his father Darren and sister Melanie he is keen for the outside drives – especially when they come up winners!

“I will head to Newcastle next and then up to Tamworth the following week – that seems a bit of a regular for me now heading to Tamworth – it’s a good track,” he said.