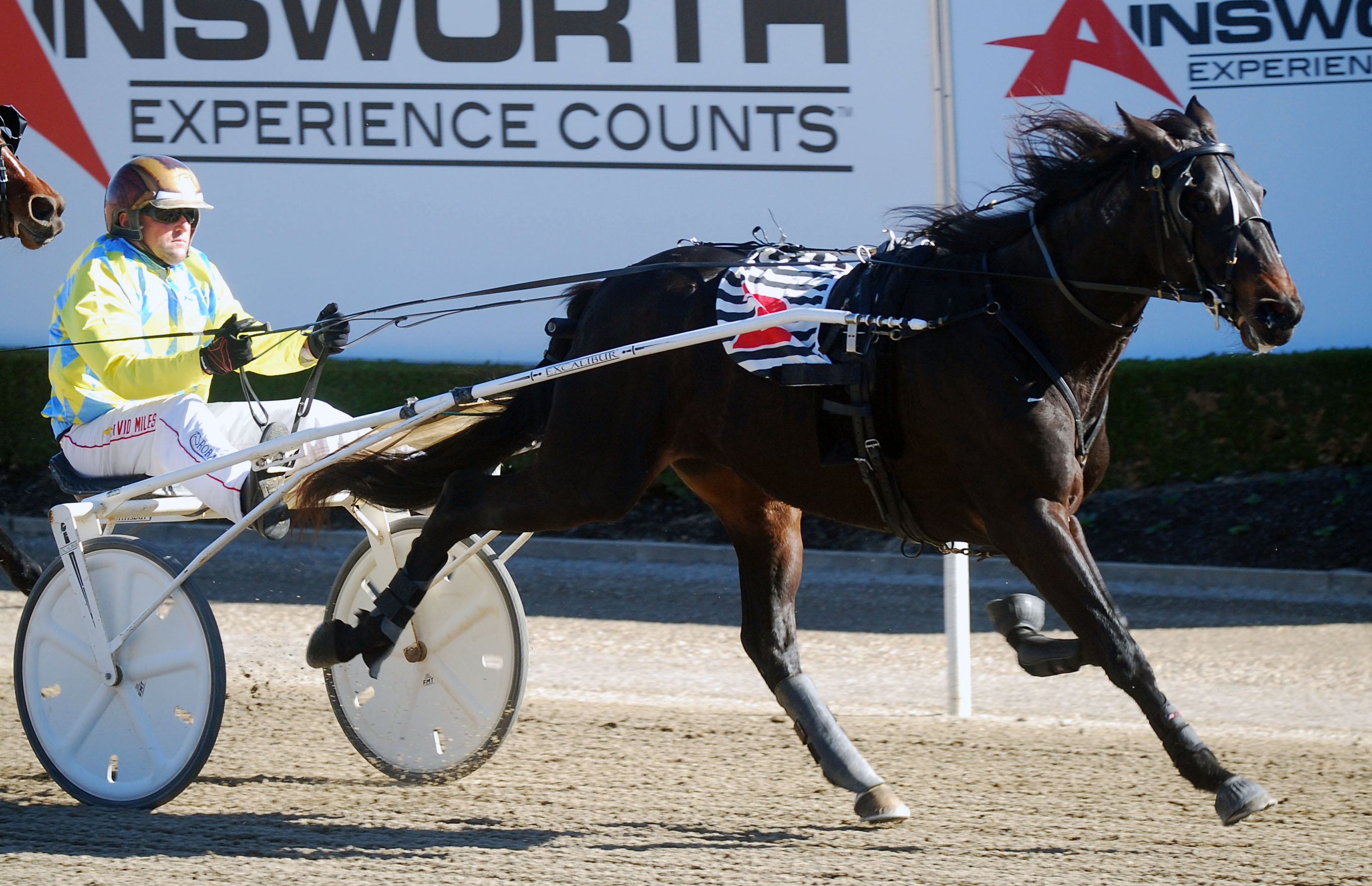 AUSTRALIAN RECORD: Emerald Stride races away to score at Menangle on Tuesday. David Miles would love a repeat of that on Saturday night.

Emerald Stride to hold off the Golino ‘army’

A REPEAT of Tuesday’s record-breaking run might be all it takes for two-year-old filly Emerald Stride to hold off an Anton Golino ‘army’ at...

A REPEAT of Tuesday’s record-breaking run might be all it takes for two-year-old filly Emerald Stride to hold off an Anton Golino ‘army’ at Tabcorp Park Menangle on Saturday night.

Emerald Stride set an Australian record with a stunning finish at Menangle on Tuesday and connections made no secret of the fact they felt the horse might be good enough to earn an invitation to contest the rich Harness Jewels in New Zealand next week.

Alas, they were too late by one day and the Emilio and Mary Rosati-owned youngster will have to be content with Saturday night’s feature, the $30,000 Group 2 Peak Trot NSW 2-Y-O final at ‘The Big M’.

Trainer-driver David Miles was understandably over the moon with Tuesday’s win and admitted he couldn’t even remember if that was his first Menangle win or not.

“She got up here and just relaxed and full credit to her that she travelled for eight hours up on Sunday, to do all that, and she was unraced and do everything she was asked to do was just super,” said Miles.

“Her work at home has been good but she is a bit lazy. And like all baby trotters you don’t push them until you have to.

“We didn’t really expect to beat Tim Butt’s horse on her home track and we would probably have been happy with second but were more looking to Saturday night.

“All that has changed with Anton having six in the one race which sure changes things a bit.

“With her work at home we thought she was a bit above average but for her to do it all on race day was just fabulous.”

Miles did admit he hadn’t realized how quickly Emerald Stride was travelling until he saw the time of 2:02.4 was an Australian record, breaking Ten Commander’s 10-year-old record by 1.7 seconds.

“I got a surprise which was a good thing because if you get a surprise when you learn they are going that fast it generally means they are pretty nice horses,” he said.

“Even when I pulled off Chris Geary’s back she ran by the other one (Running Free) pretty easily.

“It’s a shame because we rang New Zealand straight after the race to try and get her into the Jewels only to find their invitations cut off yesterday. You wouldn’t believe our luck because this race was supposed to be run on Monday but was put off for a day when they didn’t get a meeting.

“That would have been a great thrill to go to the Jewels on Saturday week.”

Miles said there were always going to be a few horses come out of the woodwork and Golino had a few first starters and at least one of them would turn out to be a really good horse.

“Anton’s horses are the best-bred trotters in Australia, if not the world,” said Miles.

“They’re just the best bunch so I wouldn’t be silly enough to say we are good things.

“But if she trots like she did today and runs the same time as she did today, then they’ll know she’s in the race.”

Golino has starters in all three of Saturday night’s major trotting finals, with La Grange in the three-year-old trotters final; Une Belle Allure in the trotters’ 4 & 5 year-old final and an unprecedented six of the 10 in the two-year-olds’ final.

“David’s horse was awesome,” said Golino when asked which were his best hopes.

“It’s hard to say how ours will go as a bunch are having their first starts.

“Pat (Driscoll) was keen to support the series so that’s why we’re bringing them all up.

“The way David’s horse went today we’re not sure we can go with her. She was impressive and I watched her trial and she impressed me then too.

“Manners are 90 per cent of it with the babies and if they can trot a little bit it sure helps.

“I really like a couple of the ones I am bringing up. I like Montpellier and think he can make a decent horse.

“And I really like All Cashed Up as well . . . but I gave them a start at Shepparton and they both made breaks.

“They can go a bit. The little filly Norquay is a little tradesman at the moment but trialled decently and I like her a bit too.

“The other filly, Deneuve Star has some ability but is very green while the other colt, Beau Garcon, is drawn 10 and that’s nearly impossible [to win] from out there.

“I do like Montpellier and All Cashed Up as probably the most forward of my ones, I guess.”