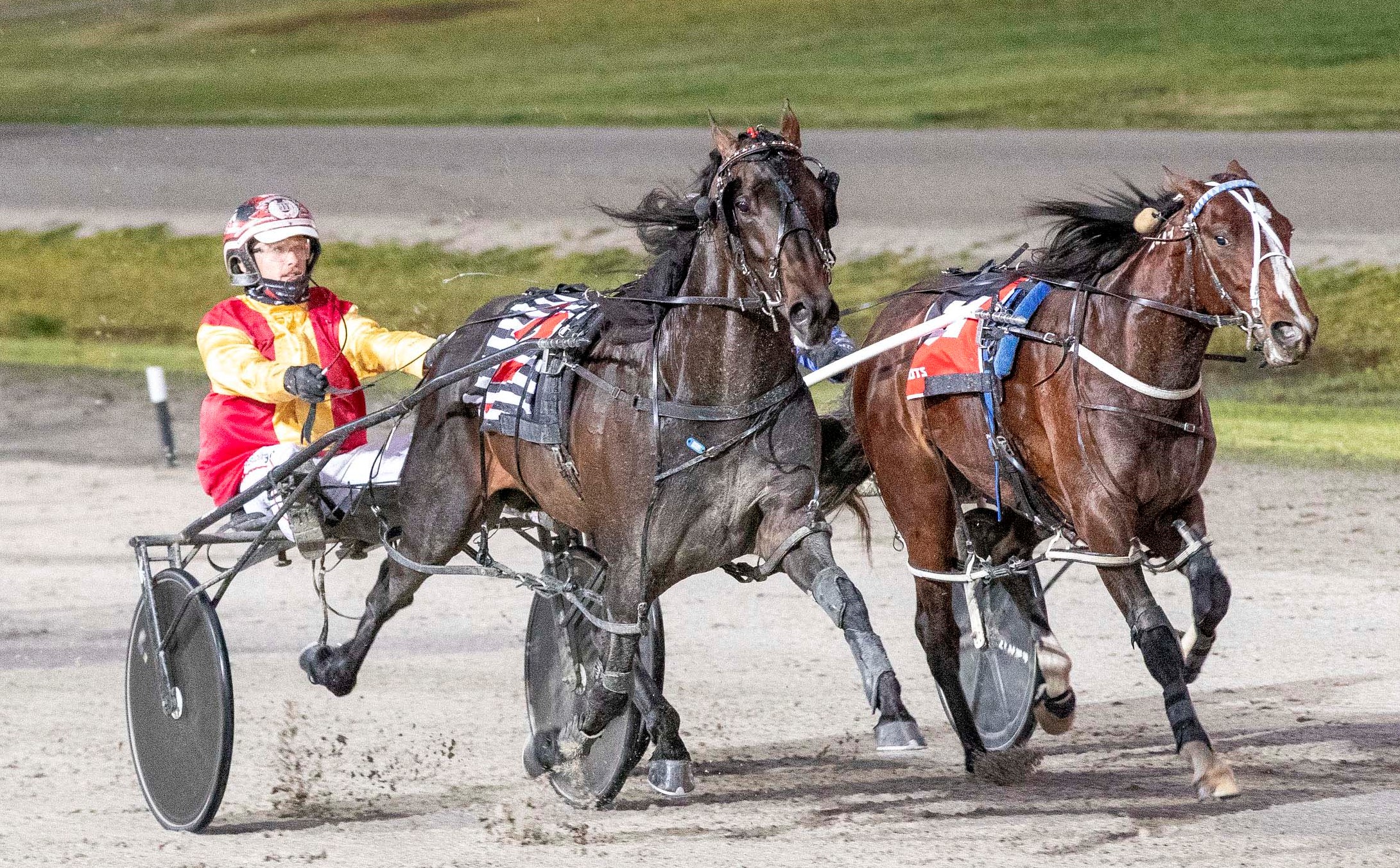 Act Now1 Blitzern1 Major Moth1 Victoria Derby1
TRAINER Allan McDonough fought back tears of joy after an emotional win by Blitzern in the first heat of the Victoria Derby at Bendigo...

TRAINER Allan McDonough fought back tears of joy after an emotional win by Blitzern in the first heat of the Victoria Derby at Bendigo on Saturday night.

Driven by his son Bailey, Blitzern produced a stunning finish to down American Dealer, Bondi Lockdown and Tuppence as they became the first four horses through to next week’s $200,000 final.

McDonough senior explained how he and his son had re-united about six months ago when Bailey asked if he could join his father in Victoria and work with Emma Stewart and Clayton Tonkin and their big team.

“We’ve always been in contact but I hadn’t really seen him since he was about six months old,” said McDonough.

“But this is just brilliant and word cannot describe how special this feels.”

In a strangely-run race which saw interference and a couple of gallopers, the favoured pair of American Dealer and Bondi Lockdown were expected to fight out the finish but they didn’t count on Blitzern’s flashing finish to score by 1.8m in a 1:57.2 mile rate over the marathon 2650m journey.

“I’m keeping it together, but halfway up the straight I was thinking I had better get the job done or Dad will be getting stuck into me,” grinned Bailey.

“He loves to do it the gritty way, this horse.

“He can come from anywhere and depending on where he draws in the final, whether he has to go forward or back, it’s all tempo-related and that should suit him.

“He can put in a big finish from anywhere.

“We knew he loves the long trip . . . he just keeps going and going. He likes to do it tough and he’ll be there when it matters in the final. We can’t wait.”

The second heat went a lot more according to the script when Kimble found the front before reinsman Matthew Craven handed up the lead to the short-priced favourite Major Moth (Damian Wilson).

The impressive son of Art Major was then able to back off the speed with a 63.5s first half of the final mile.

Turning for home, after a third split of 27.9, Wilson lowered the handlebars on the Emma Stewart trained favourite ($1.20) and Major Moth withstood the challenge of Kimble in the straight with a final kick of 26.6s to score the way most punters expected him to, beating the three other Derby qualifiers Kimble, Ideal Dan and Yambuckian in a 2.00.1 mile rate.

“He was a lot sharper tonight; we weren’t 100 per cent happy with him last week so Emma changed a bit of his gear and he felt a lot better horse tonight,” said Wilson.

“He seems to knock off a little when he hits the front but every time you ask him, he has that high speed and with speed like that, you can sit off anything.

“The way he came out of the gate last week was a concern but he was on his game tonight and that made all the difference.

“He’ll go quicker for longer when driven off the pace and frankly he can win from anywhere.”

The third Derby heat saw Jodi Quinlan at her best, taking luck out of the equation as the Emma Stewart-trained Act Now scored a stunning win, beating Better Eclipse, who came from well back to nab second, just ahead of Rock N Roll Doo and Longfellow with Pats Beach Storm a close-up fifth in a slick 1:57.5 mile rate over the longer journey.

“Don’t discount him if he gets a trail up as I reckon he’ll go ‘whoosh’ next week,” said Quinlan after the win.

“Emma and Clayton have been rapt with him this time in.

“I didn’t even turn the whip or pull the plugs tonight. He just felt awesome.

“He’s got speed, he’s versatile and he has all the faculties that make a really good horse.

“I drove this horse in the Derby in Sydney and it was good of them to leave me on him.

“Major Moth beat us in the big one last year. He sat on our back and outsprinted me.

“Hopefully it will be different this time around.

“I love this horse, because he’s just so adaptable.”

Greg Sugars was also delighted with the run of Better Eclipse in finishing second after coming from well back for second spot in heat three.

“He can’t do the bullocking work but he follows the speed very well. He obviously needs a few to fade in the final, but he’ll be right in the mix,” said Sugars.

The 12 qualifiers for the Victoria Derby final, with the draw to be done on Monday night, were: