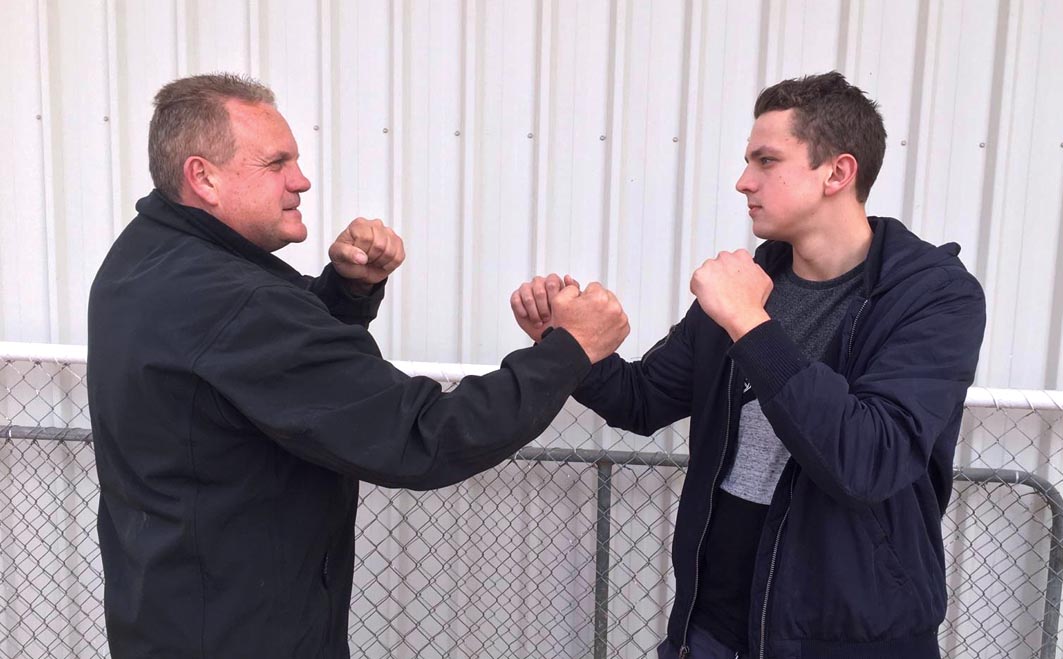 Adelaide show1 Family1 Jayden Brewin1 Justine Brewin1
ONE is a ‘geriatric’ while the other is an ‘upstart’ – that’s how the sledging is already unfolding ahead of Thursday night’s exhibition races...

ONE is a ‘geriatric’ while the other is an ‘upstart’ – that’s how the sledging is already unfolding ahead of Thursday night’s exhibition races at the Adelaide Show.

Preferring the reference ‘experienced’, Justin Brewin is eagerly awaiting the opportunity to educate his “Johnny-come-lately” son, Jayden, as the trots return to Wayville.

Having taught Jayden, who is regarded as one of South Australia’s most gifted concession drivers, Justin stated it is time to provide the 17-year-old with “a real lesson in driving”.

“Justin has to remember, he drives great, but I’m a great driver,” Justin declared.

“I taught him everything he knows, but now it’s time to give him a real lesson in driving.

“Not only have I got the years of experience, I drove at Wayville a few nights ago, while he is still a maiden around the track.

“Come Thursday night I will show him what it’s all about.”

While trying to offer understanding to his father’s fragile state of mind, Jayden was quick to point out times have changes since Justin’s lat official racing appearance.

“I think the last time Dad drove the sulkies pulled square locks because they hadn’t invented the wheel,” Jayden remarked. “I’m not sure why Dad thinks he can beat me…maybe it’s alzheimer’s kicking in!

“Either way, he is in for a sad realisation he’s yesterday’s hero. I will kick his butt and he will then see it’s time to hang up the reins for good.”

As the special races are exhibitions, trainers have been granted permission to drive, which paves the way for Justin to occupy the sulky while also setting the scene for the first clash between father and son.

Justin hasn’t driven in an official race for almost a decade, while Jayden just completed his first season in the cart.

“I had a bad race fall about 10 years ago where I broke ribs and punctured my lung,” Justin explained. “I had two years off then came back for a few drives before giving it away.

“It’s been about eight years since I drove in a real race, but I enjoyed going around at Wayville last Saturday night.

“I was surprised by how competitive the drivers were as if they were reviving the good old days, but it was a great exhibition for the industry.

“After the race I did a lap of honour and had young and old hanging over fence giving me a high five – it was fantastic.”

Making a massive impact in his debut season, Jayden won 55 local races – the highest concession tally since Ken Rogers’ 61 in 2011/12.

Jayden was 22 wins clear of his closest rival, Michael Smith, on the Young Drivers’ Premiership.

Racing began at Wayville in October 1925, with Lustre capturing the feature event on the card for Fred Kerlsey.

The track was the home of South Australian harness racing until 1973 when Globe Derby Park was opened.

As a one-off extravaganza, Harness Racing SA will conduct an official evening of racing, nostalgia, fun and entertainment at Wayville.

Within a week of releasing dining packages, HRSA have already announced the ‘reserve grandstand packages’ are sold out.