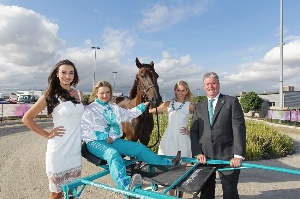 WHAT a fantastic start to the Teal Pants campaign. Just a week after the launch of the 2018 edition, Australasia’s leading ladies have won...

WHAT a fantastic start to the Teal Pants campaign.

Just a week after the launch of the 2018 edition, Australasia’s leading ladies have won an amazing 39 races.

Each reinswoman throughout the southern hemisphere is part of the Teal Pants Team, which is raising valuable funds and crucial awareness for ANZGOG – Australia New Zealand Gynaecological Oncology Group.

Money is raised via each win between February 1 and March 11, which doubles as Australian Reinswomen Championship night in Tasmania.

As such, the first week of the campaign has seen $13,800 earned for the cause.

While the victories have been well-spread among the squad, New South Wales has led the way with 13 wins.

The second week, which began with a meeting in Victoria and Queensland this afternoon, already has three wins thanks to Kerryn Manning, Kelli Dawson and Isobel Ross.

Tonight’s action includes another Victorian program and one is New South Wales, with teal pants to be worn in 14 of the 15 races.

Tough task in bid to reclaim title
Dropping the ‘working’ part from worki...
One champ jets out . . . and another is just warmi...
Tall tales to flow at track record speed
About author