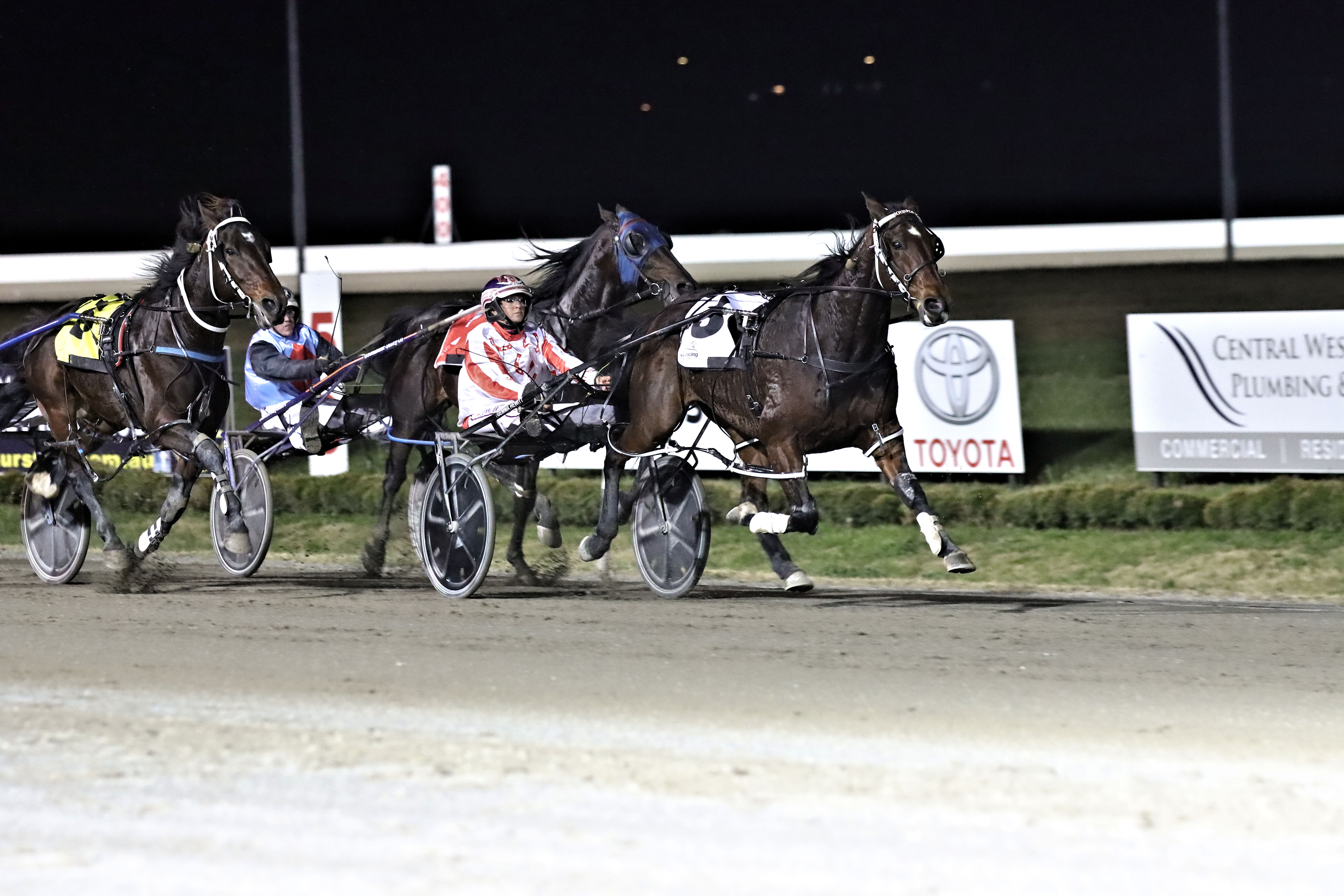 Gemma bags her first Group One

A ‘B’ grade driver’s license prevented Gemma from driving Keayang Kreuzer, or her other runner Kash Us Back in last night’s $100,000 Western Final of the TAB Regional Championships.

So, Hewitt did the next best thing and booked the state’s premier reinsman McCarthy for the drive – and the rest, as they say, is history.

The former Bathurst-based horseman punched through and held the lead from the pole while stablemate Kash Us Back sat outside of him.

With a lap to go Kash Us Back (Brad Hewitt) went to the front, which would not have bothered McCarthy in the slightest as the well-backed Chasing The Wind (Amanda Turnbull) was then left to race without cover.

With a 58.2-second first half of the last mile, Kash Us back retained his advantage with a 28.2-second third quarter but turning for home and Keayang Kreuzer was travelling so well McCarthy came to the outside and found the front while Crazy Shippo (Jason Hewitt) got up along the pegs to grab second with Kash Us Back a gutsy third in 1:56.1 mile rate and a final split in 29.1 seconds.

Luke now heads for Menangle Saturday night and will drive Muscle Factory, the short-priced favourite for the Metropolitan Final of the TAB Regional Championships.

Gemma would have loved being aboard one of her two runners last night, although her effort to qualify two of her six-horse stable for the feature was a feat in itself.

“I set this horse for this race last year when the Loaders bought him and it has been quite a task to keep his ranking below 70 so that he was still eligible to contest this series,” said Hewitt.

“He finished second in a Menangle Country Series and has been coming along nicely.”

Hewitt explained that she was relieved when her horses draw so well in the final but also found that she was very nervous that having the favourites meant they had to perform at their best as well.

“It was nice to think that a Group One was going to go to one of the locals, as there were plenty in the race,” she said.

“Dad [Bernie] also had two in the final and we don’t keep any secrets out here: in fact, they all work together at home as we all help each other out of a morning.”

Gemma admitted she would have loved her first group 1 drive, but it was not to be.

“I drove in the heats and they were the same horses and the same drivers, I guess it’s just a pity that I had to watch someone else take the reins in the big race,” she said.

“It also meant I was able to focus on getting the horses ready for each race.

“I had quite a few members of my team in that night, so it was pretty busy.

“We have qualified for a few Group 1s this year but to win one is just the icing on the cake.”