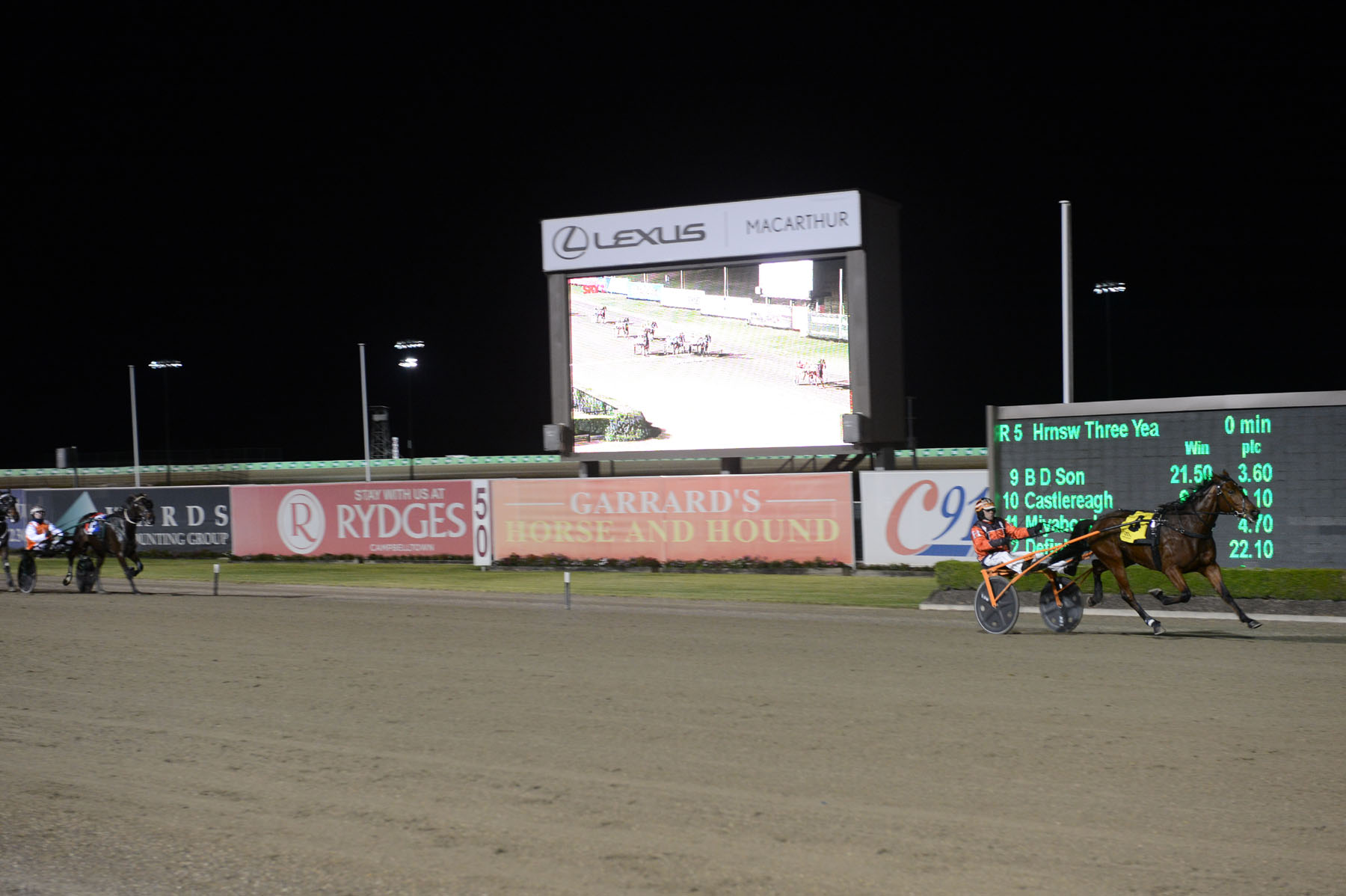 TOO STRONG: Drop The Hammer clears out for a big win after making a successful conversion from pacing to trotting to score at Menangle on Saturday night. PHOTO: Chips Lett.

MAKING THE transition from pacing to trotting with Drop The Hammer ($3.90) proved a winner for trainer/driver Darren Hancock at Club Menangle on Saturday...

MAKING THE transition from pacing to trotting with Drop The Hammer ($3.90) proved a winner for trainer/driver Darren Hancock at Club Menangle on Saturday night.

The three-year-old gelding destroyed the field to win the Group Three feature race.

Hancock finished more than 25 metres ahead of his nearest rival when he steered Drop The Hammer to victory in the HRNSW Three Year Old Trotters Foundation Final.

Racing over 2300m, Drop The Hammer, a son of Bettors Delight, and eventual runner-up Castlereagh were fighting for the lead approaching the final turn.

Drop The Hammer forged ahead to lead entering the home straight and quickly kicked away to stop the clock in a winning mile rate of 1:59.5 seconds.

The win was Drop The Hammer’s second victory in 16 starts and his first success at Group level.

Other notable drives at the meeting included James Rattray, who recorded a double with Rykov Leis ($3.40) and Arma Naughty ($14.30).

Rykov Leis, an eight-year-old gelding out of Art Major, was involved in a close finish in the 2300m race.

Drawn as the widest runner, Rykov Leis sat on the shoulder of the leader Controversial as the field past the winning post for the first time.

Runner-up Mind The Wire led going into the home straight but Rykov Leis put his nose in front with about 50m left to run, to hold on for his 18th victory from 108 starts.

Rattray had a more comfortable win for the second leg of his double when Arma Naughty caused an upset to hold off John McCarthy’s odds-on favourite Hows The Memory, in the Pink Diamond – NSW Breeders Challenge/State Bred Three Year Old Fillies Pace.

The lightly raced daughter of Somebeachsomewhere, having her first race at the Menangle circuit, went on to win by 3.6m to record her second win from seven starts.

Will lightning to strike twice on Super Series nig...
Morris ready for this ‘Occasion’
Dual Oaks winner continues to star in USA
Victory helps ease pain from fall
About author