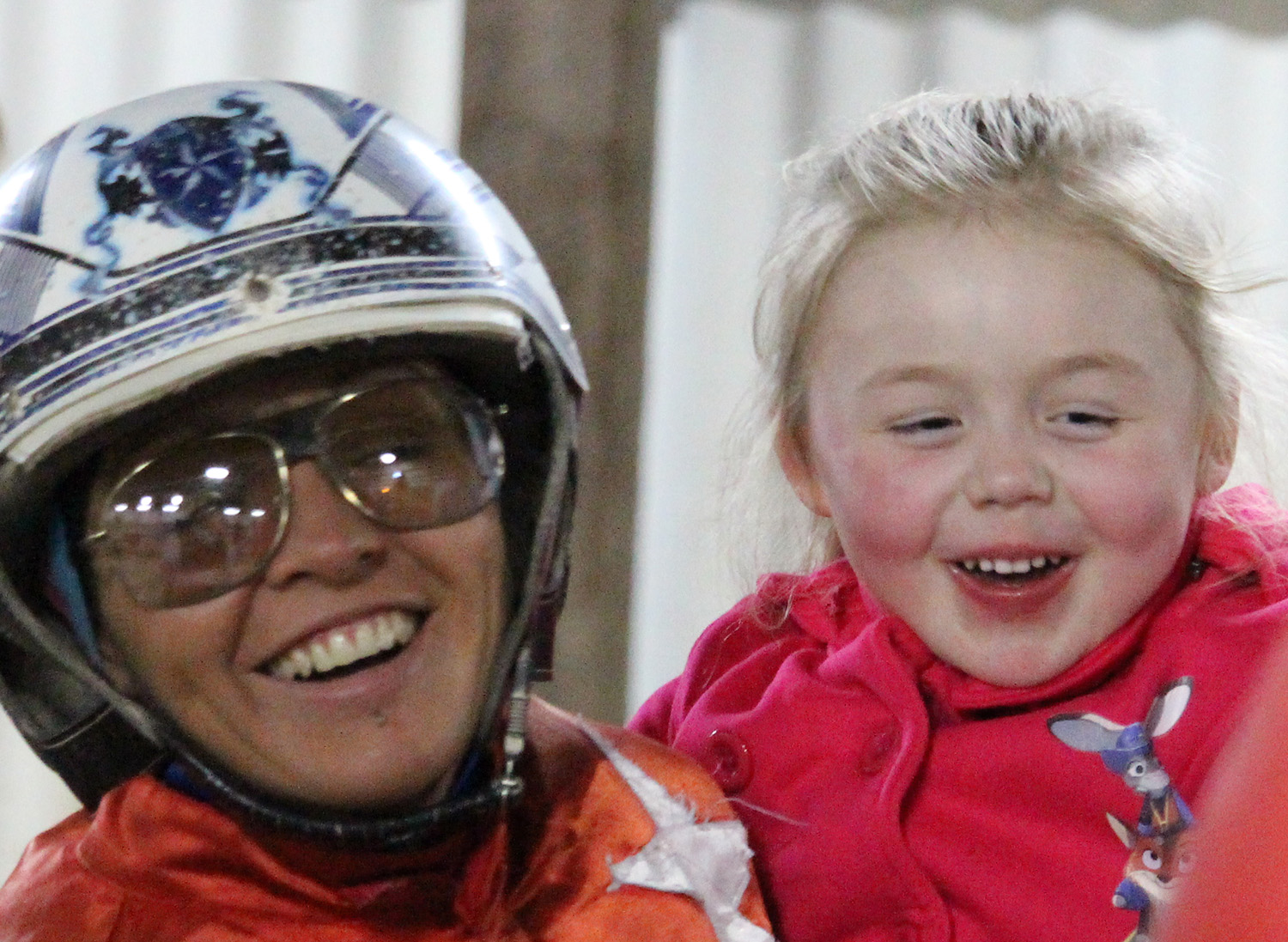 DANI HLL with her daughter Brooke

race1
<blockquote>RAISE THE BAT, DANI! That’s a stunning 200 for the season</blockquote> THERE is no-one better placed to comment on driver Danielle Hill’s achievement of...

That’s a stunning 200 for the season</blockquote>
THERE is no-one better placed to comment on driver Danielle Hill’s achievement of driving 200 winners in the 2015/2016 season than her partner David Harding.

Harding, a three-time 200-plus winner, knows the time, effort and sacrifices needed to reach the tally, especially in South Australia where there are only three meetings a week, some of which are at Mount Gambier.

After a treble at Port Pirie, Hill went into Saturday night’s meeting at Globe Derby Park on 199 wins – 197 in South Australia plus one each in Tasmania and Victoria.

Hill won on Lost In Bangkok, The Stork and Springfield Oflynn to break through the 200 mark.

Lost In Bangkok brought up the 200 nationally, then Springfield Oflynn capped the night by giving her 200 wins in South Australia.

“To reach 200 is a wonderful effort,” Harding said.

“It requires a lot of hard work, plenty of sacrifices and a lot of luck.

“What makes it even more remarkable for Dani is that she has had to overcome the loss of an eye.

“I have seen how she has worked to learn how to walk again, just do things we take for granted with two eyes, then learn how to drive a car, and eventually get back into a cart.

“I am in admiration of how she is back driving and handling the pressure of racing, and able to be so successful.

“Dani loves horses, they love her, and they travel for her and the results prove it.”

Hill said the 200 winners had been her own personal goal pre-season.

“I didn’t make it known publicly but joked with Wayne (her brother),” Hill said.

“I am proud of my achievement but I have had a wonderful team behind me that helped me reach the milestone.

“That goes back to the surgeons, rehab people and more recently the trainers who have been prepared to let me drive their horses.

“One of my first calls this week will be to the staff at rehab centre who got me going after losing the eye.”

Dani’s ability was well-known as in 2009 at the Gold Coast she landed the Australasian Young Drivers Championship beating a group of drivers including present-day stars such as Dexter Dunn, Nathan Williamson and Amanda Turnbull.

But her whole world changed on a Monday afternoon, May 17 in 2010 at Globe Derby Park when Puaxtacy crashed to the track which resulted in the loss of her right eye plus facial fractures to her cheek, jaw and nose. She also suffered bleeding to the brain.

Her injuries eventually healed but despite a lot of hard work, surgeons couldn’t repair the break of the optic nerve to the brain.

Out of adversity came a treasure.

During her recovery time, Dani and David celebrated the arrival of a daughter Brooke who was on course on Saturday night to celebrate the milestone.

Hill is the 20<sup>th</sup> reinsperson in Australia to have reached 200 in a season, and just the third female, following Kerryn Manning and Amanda Turnbull.

She currently sits fourth on the national driver’s premiership.

The Stork scores for record-breaking Dani Hill as part of her treble at Globe Derby last weekend.