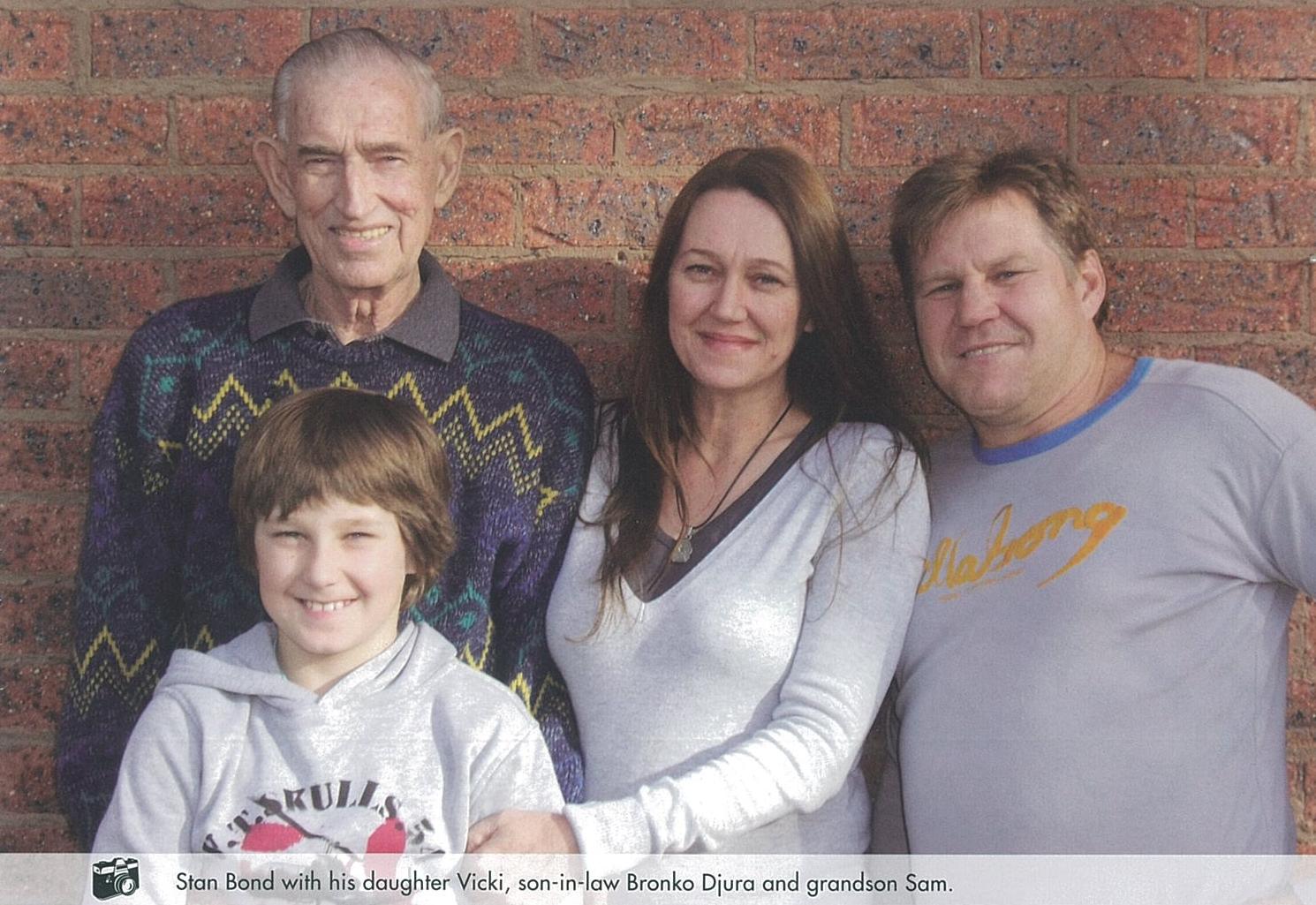 The tales of the late Stan Bond will live on forever He was a few months short of his 83rd birthday and had been...

The tales of the late Stan Bond will live on forever

He was a few months short of his 83rd birthday and had been battling cancer for some time.

Stan Bond passed away last week but the tales of his attachment to harness racing will live on forever.

Stan leaves behind a daughter Vicki, son-in-law and former rugby league first grader Bronko Djura and grandson Sam, 17 a good all-round sportsman that made Stan as proud as anything in his life.

Dennis Wilson worked for Stan for about eight years in the late 60s and early 70s and became a life-long friend after that and few are in a better position to relay some of the tales involving Stan . . . and they were legendary.

One of the best Stan Bond prepared was a horse named Richana, which he always labelled one of the best to pass through his hands.

He was a horse that Stan had acquired from New Zealand and Wilson vividly recalls Bond winning three or four straight at Harold Park with that pacer.

“He was owned by a guy named Norm Arnold, from memory and he had a share in a horse called Cheribon and it was going to the Inter Dominion,” Wilson told me last week.

“Anyway he took him to Lithgow to time-trial him there and give him a hit-out on the little Showground track and they had a rainwash and they filled the track with gravel and he went two minutes around the track, and that was unheard of in those days.

“Unfortunately he hurt himself shortly afterwards and Stan never got him back after that.”

Wilson recalls how the two came to meet and a form a ‘Bond’ that was to survive for many years:

“My parents were at Katoomba when I was a young lad and I’d try to get to Harold Park every Friday night and I’d either hitchhike home or catch the last train to Penrith and hitch-hike from there – you could do that in those days and you wouldn’t get arrested,” said Wilson.

“I had started going to Harold Park when I was about 14 and I bumped into [trainer] Kevin Chisholm one day when I saw him with a horse and became friendly with him.

“Kevin told me that if ever I saw the name of his step-father Stan Bond in at Harold Park, just go and see him and I’d get a ride home to Katoomba.

“He went and told Stan about me.

“The first night I go to HP from work at Lithgow and I spot Stan has this named Cheribon and it’s in the last.

“Anyway he sits outside this horse that Lawrie Moulds had that had just raced in the Inter Dominion named Leading Light, which they left with Lawrie.

“He sat outside Leading Light and beat him a head.

“There we were all chatting and laughing and the next minute in goes a protest . . . and lo and behold up comes Lawrie’s number as the winner. Well, the crowd went berserk that night, I can tell you.

“Stan went ballistic – and I remember thinking ‘what have I got myself in for here?’. This bloke’s a madman.

“So we’re going home later that night and I’m falling asleep and the next thing Stan opens the car door beside me and screams ‘look out’ and all I could see was the road rushing past beside me. He gave me a heck of a fright.

“Eventually we get home – and there’s no freeways in those days – and Stan was also training gallopers as well.

“We finally get back to Katoomba at about 3am and we put the two horses away and offers me a cup of tea.

“I kept saying it’s Dennis but he and his wife called me Denny forever after that – and it stuck.

“In the end I gave up. So every one of his owners called me Denny after that.

“We go inside his house – and this is a bloke I’d only just met, mind you, and he’s just lost a race on protest.

“It was a schmozzle. So I had my tea and said ‘I had better get going’.

“He says, ‘no you’re not, we’re not finished yet. I have to go Hawkesbury now and give two gallopers a jumpout’. I said ‘you’re kidding me’.

“The next thing we’re off to Hawkesbury for these two bloody gallopers – I cannot even remember their names but it was pretty exciting for this 16 or 17-year-old kid, so off we went and I think I got to bed at about 3 o’clock that afternoon – from Harold Park.

“That was my introduction to Stan Bond and he had good horse after good horse and although I didn’t know him before that I know that I know he started off with Charlie Parsons, then took a job as a private trainer for a guy named Keith Chick at Katoomba.

“And that’s how he got there.

“Like me he lobbed at Katoomba in the middle of winter and thought ‘what a bastard of a place’.

“But then spring and summer came and he fell in love with the place.

“Stan went on to train some great horses, in Keith Chick’s name.

“He won a Spring Cup, worth 5000 pounds and that was a lot of money in those days. That was with a horse named Kerryfield.

“Then Lawn Classic was another good horse that he had. He had a little horse called Fedoro, another one called Nevoland and he had a horse named after one of those American tracks of that time. 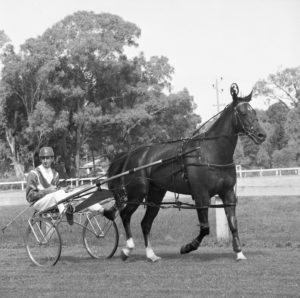 ONE OF MANY WINNERS: Stan Bond returns with Flying Away after winning a race at Richmond

“Keith Chick went to America, apparently, and named a lot of his horses after American tracks. I can’t recall that one but there were others named Yonkers and Meadowlands, names like that.

“Then he progressed to have like The Charmer and Raider Globe, he won 40 races with him and I drove him in those days.”

Wilson was happy to relay how Bond would prepare his horses for a race – and a bet:

“He’d take a horse to the gymkhana at Granville and let it race around Granville and then he’d spell it or just keep it at home for up to six months,” Wilson said.

“He was a punter and he wanted everyone to think there was something wrong with it.

“One of his quirks was he’d enter the horse three times in a row and then scratch it each week.

“Then he’d keep it away for six to eight weeks and not go to the trials and everyone would think the horse had bad legs or something and would steer away from backing it.

“That was just one of his ploys.

“Stan was a master horseman; a very good money driver and an outstanding farrier as well.

“They would come from far and wide to use him; People like Kevin Robinson would bring him their horses as well as all the locals as well.

“He went to Maitland for a while and also did a little stint in Qld where he took a good mare up there to race.

“Her name was Miss Hondo and he’d been backing her up week after week and she’d won four or five in a row and at that stage he had a pot of about $30,000 or something like that.

“So he had the whole lot on her one night, he thought she was unbeatable . . . and she was beaten a nose.

“Stan got in the car and drove home and never said a word about it and was the same cheerful bloke the next day.”

Wilson also had a part to play in Stan Bond’s last winning drive – because it was for his stable – and the horse’s name was Commanding Star.

“I had a month [suspension] and old Kevin McCormack owned this horse and I told him that I wanted to get Stan to drive him because I felt he was a certainty and he’d win and Stan wasn’t going to drive any more so it would be good to get him a winner to go out on.

“I think he was in his early 60s and Kevin knew him and being a veteran himself was happy to give Stan the drive and he won – and gee, he was happy.

“That made his year.”

“Every time Sam got a good score or something like that he would ring me up to tell me about it,” said Wilson.

“He got to know what time I’d get home from Menangle and the minute I’d walk in the door, the phone would ring and he’d say something like ‘gee, you went good tonight Denny.’

“And right up until his last breath, he’d do that.”

“He always considered Richana was his best horse – he always said he would blow them all away.

“He never had a lot of pictures of his horses – but he always had this picture of Richana returning to scale on his wall.

“He was a man before his time – Stan Bond – he was one of a kind, also one of the first to do blood counts – he was an innovator, that’s for sure.”

RETIRED trainer-driver Dennis Wilson recalled another great anecdote involving one of Stan Bond’s horses which just has to be re-told:

“Stan had a horse named Togo Togo that he bought from the Harpleys and he won several at Harold Park with him.
“I’ll never forget what happened one day when we were in a race at Maitland.

“Stan pulled him out to go around them with about seven furlongs to go and he got shunted four wide, because you could do that in those days.

“He was a high-speed horse and he couldn’t get around them and I remember thinking ‘gee, your sluggish’.

“And we didn’t find out until about three days later, when we talking about it over a cup of tea.

“The day before Kevin Chisholm (Stan’s set-son) and a bloke named Keith Flanagan went down to swim Togo Togo in the river.

“Stan and I must have been elsewhere, can’t remember why, and the river had been running because it had been raining and there had been some flooding.

“He went in and there was a marker and they’d swim the horses 20 minutes down the river and 20 minutes back.

“Anyway with the current he way it was he was down to the marker in 15 minutes and it took him two hours to get back.

“They were going against the rush of the water.

“They shut up and never said a word about it and we took the horse to the races and he never had one bit of speed in him.

“I could write a book on stories like that. I could fill the paper up with them.”