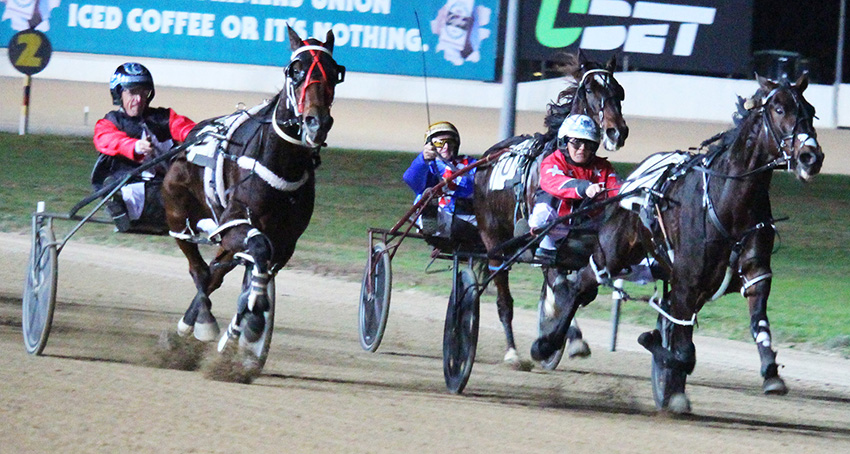 FAMILY MATTERS: you can see the desperation on their faces as Wayne and Danielle Hill try to beat each other at Globe Derby last weekend.

Hills just love beating each other up

BROTHER AND SISTER Wayne and Danielle Hill are two of South Australia’s star reinspeople . . . and between them have driven more than...

BROTHER AND SISTER Wayne and Danielle Hill are two of South Australia’s star reinspeople . . . and between them have driven more than 280 winners this season.
In South Australia, Danielle, with 147 victories, is closing in on 150 winners while Wayne, 97, is about to make it 100 for the season.
Despite their successes, make no mistake there is great sibling rivalry and is was evident at Globe Derby Park on Saturday.
Wayne’s frustration was evident in the Just Wrecking Toyotas Pace (1800m) when Montanas Jet, which he drove, was run down in the shadows of the post by Canada Bay, trained and driven by Danielle. Shortly after passing the post, he let out a cry of annoyance.
Bred and owned in New South Wales by Michael Taylor, Canada Bay ($6.40) scored by a metre from Montanas Jet ($5.80) with Glenferrie Bunter ($1.50 favourite), a head away third.
For the runner-up, owned and trained by Waylon Hornhardt at Port Pirie, it was the third race in a row where Canada Bay had claimed victory against him.
Each time, Montanas Jet has settled at the tail of the field and twice gone forward late with Canada Bay on his back and running him down in the home straight. The other time, Hornhardt’s five-year-old went forward early to sit parked but kept the speed on and Canada Bay came late to win.
Danielle Hill said the incredible early speed played into the hands of Canada Bay.
Kaela Hryhorec, on Glenferrie Bunter, went forward and sought the lead but Ken Rogers on Hilltop Rose kept pushing through from gate one and held the advantage with the result the first two quarters of the last 1600m were run in 28.3s and 28.9s, then Montanas Jet joined in for a 29.9s third quarter which allowed Canada Bay to come home in 30.3s to grab the win.
“I was very happy with the speed on,” Hill said.
“I knew he was going to be hard to hold out and he came home strongly.
“I’m not sure what Michael has in mind for him, but he is getting right up in class here in South Australia and I’m not sure he is capable of taking on the likes of Bettor Party and Our Jericho.
“I’m sure he would be suited to racing in Perth where there is always good speed on, or perhaps he might go back east.”
If he does go to WA, he might run into Montanas Jet again as Hornhardt is giving strong consideration to sending his pacer to the west.
“It is frustrating to be doing all the work and having a horse like Canada Bay sit on you and sprint up the home straight,” Hornhardt said. “I’m sure WA racing would suit him and there is good prizemoney to be won.”
Hornhardt and Wayne Hill got their revenge in the following event, the Coca Cola Claiming Pace (1800m) when Crazy Dave cut down Danielle Hill on the hot favourite Saab Magic in the final few strides.
A $7.30 chance, Crazy Dave scored by a half head from Saab Magic ($1.90 into $1.40 fav) with Majestic Lustre ($13.10), six metres away third.
Saab Magic led from gate two with Crazy Dave taking the trail and with comfortable 30.5s and 30.1s quarters for the first half of the last mile, the favourite looked the one to beat.
Danielle sprinted up with a 28.7s third quarter which was meant to win the race for Saab Magic but what it also did was allow Crazy Dave to come off the fence and go to the outside and, in the home, straight it was magic harness racing watching the siblings urging their drives to the line.
“I’m not sure he is a horse which would have accelerated quickly enough waiting for the sprint lane,” Wayne Hill said.
“It was perfect to get to the outside and he is not a horse which likes the whip, so I just had to keep urging him and he responded strongly.”
Crazy Dave’s victory was special for Hill as the eight-year-old is owned by his son Noah in partnership with Hornhardt’s partner Kara-Lee Martens.