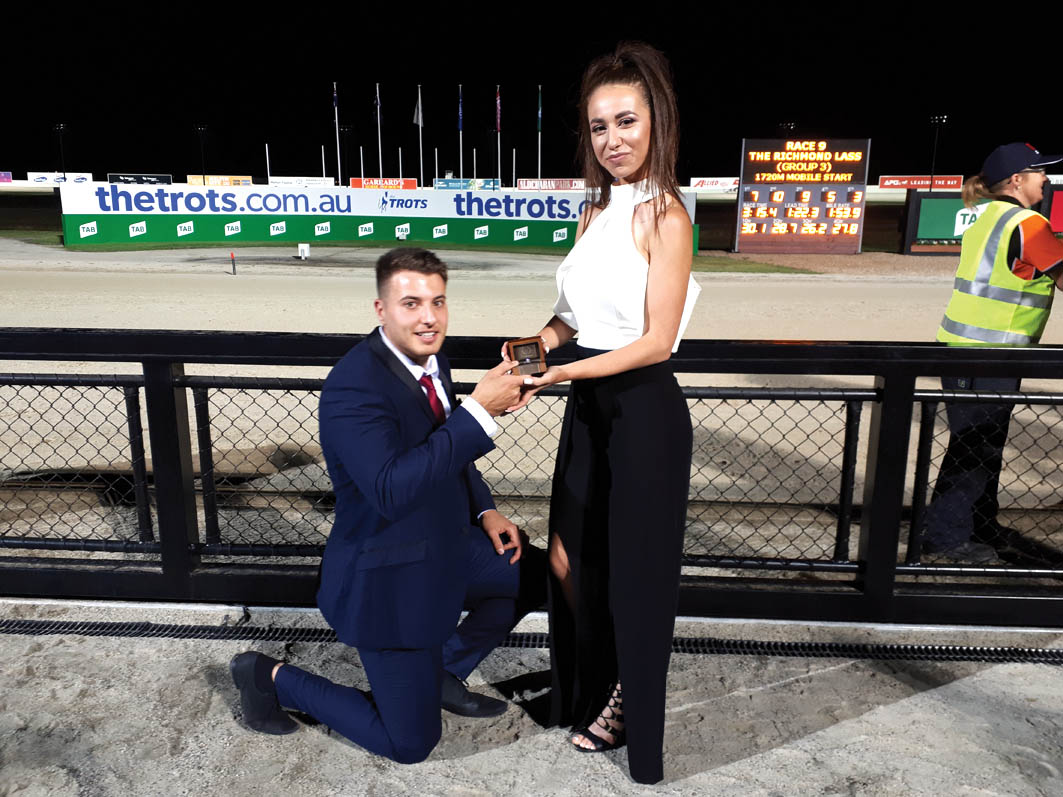 WINNING an Inter Dominion would traditionally be the highlight of an owner’s night. After all, the Championship is the most prestigious event within the...

WINNING an Inter Dominion would traditionally be the highlight of an owner’s night.

After all, the Championship is the most prestigious event within the industry.

For Mikey Hawli, however, co-owning tonight’s Inter Dominion winner Tiger Tara was his second biggest score of the evening.

In front of a stellar Tabcorp Park Melton crowd during the Final’s presentation, Hawli proposed to his girlfriend, Courtney, who is the daughter of Tiger Tara’s trainer, Kevin Pizuto.

To the delight of witnesses – and Hawli – she said “yes”!

“I had it in my mind that I wanted to propose if Tiger Tara won and that’s what he did,” Hawli said. “Courtney made me the happiest man by saying ‘yes’.

“I asked Kevin beforehand for his permission to marry his daughter!”

As for Hawli’s magical racing moment, Tiger Tara produced a scintillating display to secure the $500,000 Group One.

Pushed out of the gate to work to the front from barrier seven, the son of Bettors Delight was rated a treat by reinsman Todd McCarthy.

After ‘pinching’ the opening quarter of the last mile in 30.1 seconds, McCarthy slipped Tiger Tara more rein along the back straight as he cruised through the third split in 26.3 seconds.

Striding clear on the home turn, the stallion was untouched to complete a dominant 14-and-a-half metre win from Our Uncle Sam, with Cruz Bromac a metre-and-a-half away third.

Rating a 1:53.9 over 2760 metres, Tiger Tara sliced two-tenths of a second from Lazarus’ track record set during last season’s A G Hunter Cup.

“I’m just thrilled,” McCarthy said. “After I was left alone in front and got that cheap quarter I knew they wouldn’t catch him.

“When I asked him to go he just put a space on them in a couple of strides and was just as strong at the finish as he was at the start.”

Planning to give Tiger Tara a short break, an excited Pizzuto is yet to decide which direction he will head with the eight-year-old.

Although next month’s Fremantle and Western Australia Cups remain an option, Pizzuto is also considering a return trip to Melton for the Hunter Cup on February 2.

“I haven’t really decided where he will go next,” Pizzuto said. “I’m just so thrilled to have won the Inter Dominion that everything else just seems a world away.

“I’ll get him home, let him have a freshen-up and then make some decision after that.”

Charlie ready for a shot at ‘The Big Smoke&#...
French import to make Aussie debut in Derby heats
Now Freddie’s after a double
Arrogant Male proves he’s the Alpha
About author