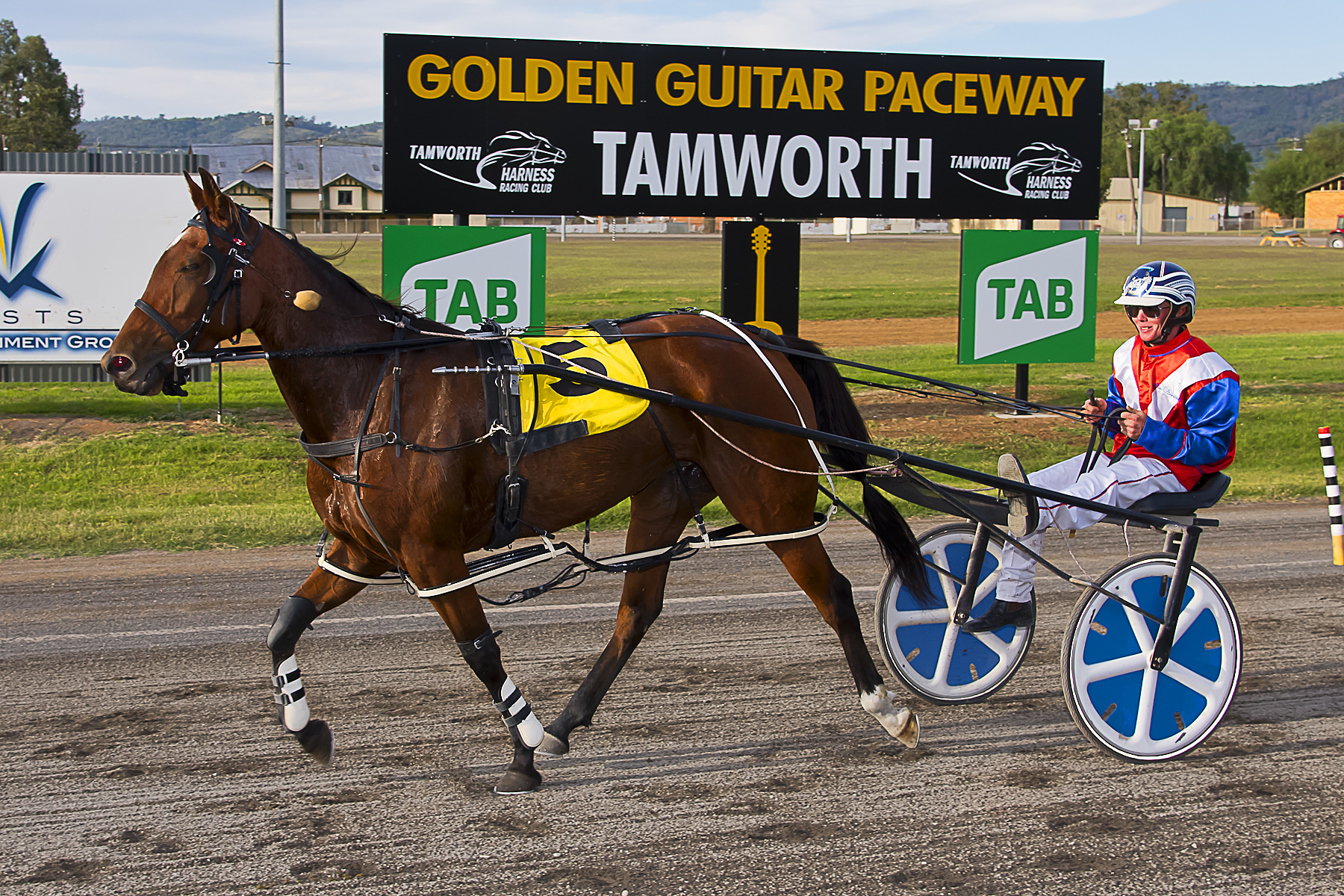 . . . and that included a $31 winner, Mickey Ramone for local trainer Tony Missen.

“The day should hopefully get better,” was how Ison described his first winner at Tamworth after taking out Race 2 on the outsider.

He was right! Ison went on for a total of five winning drives on an eight-race program.

“I have driven four winners three times before, but this was the first time driving five winners.

“I have driven a double at Menangle, which was pretty special, but a hat-trick is what I really want now.”

“He got a bit keen but when we got that 31s second quarter, I was pretty confident from there,” said Ison.

“He only has the one pace, but he just kept going and got home.”

The next four winning drives for Ison came courtesy of his boss, Roy Roots Jnr, with Black Eight a $2.30 favourite launching the wins.

“We were pretty confident with that bloke . . . we went quickly in the middle half with a couple of 29’s – that busted them (the field) up a bit and they were chasing.

Watching You Dream then added to the winning sequence in the Kevin & Kay Seymour/Tapscott Service Station Ladyship Pace.

“She came out of the gate like she was tied to the mobile,” said Ison.

“My intention was to poke out and cruise into the chair and see where we ended up, but she absolutely bolted into that first turn.”

Watching You Dream – the $1.30 race favourite – also had an all the way win just holding off a fast finishing Always A Lexus (Jemma Coney) by a short half head and She’s Worth It (Madi Young) a metre away third.

“We went along pretty quickly with a solid tempo but she (Glengarry Rose) hit the line nicely,” said Ison.

“She likes these tight tracks – we have brought her to Tamworth now four times for three wins and a second.

“Royal Gamble (Jack Callaghan) kept coming at us but she (Glengarry Rose) never gives up, which is the best bit.

“Jack and I have been having a good time of it at the last couple of meetings – it is good for us – we have been sharing the wins around.”

Callaghan actually drove two winners on the Tamworth program – keeping Ison at bay on both occasions.

Handling Kanye Crusader for the Clayton Harmey stables Callaghan just edged Ison out of another winner in beating the Tony Missen trained Harbour Town by a half head.

Callaghan then drove Repartee to a win in the Santos Cup for his father Mark, this time with a metre win over Ison, who handled He’s The Warrior from the Roy Roots jnr stables.

Bohannan’s win in the Narrabri Cup gave Tom Ison his fifth for the day.

“We thought he is a big strong horse and over that kind of trip (2360m) if he could find the front, he would be too strong,” said Ison.

“He was unbelievable at the start – he was so keen so early that I took off with him straight to the lead and he settled, then Mick (Formosa) came up with Kudos Bert and he grabbed the chewy again.

“I thought we were gone at the 400m but he (Bohannan) kept fighting on – he is just such a strong boy that he just keeps powering on.”

Bohannan won by a short half head from Glenn Ford (Jack Callaghan) with Kudos Bert four metres way third in taking out the Cup race.

“It is unbelievable . . . I have had five winners, two seconds and a third today,” grinned Ison.