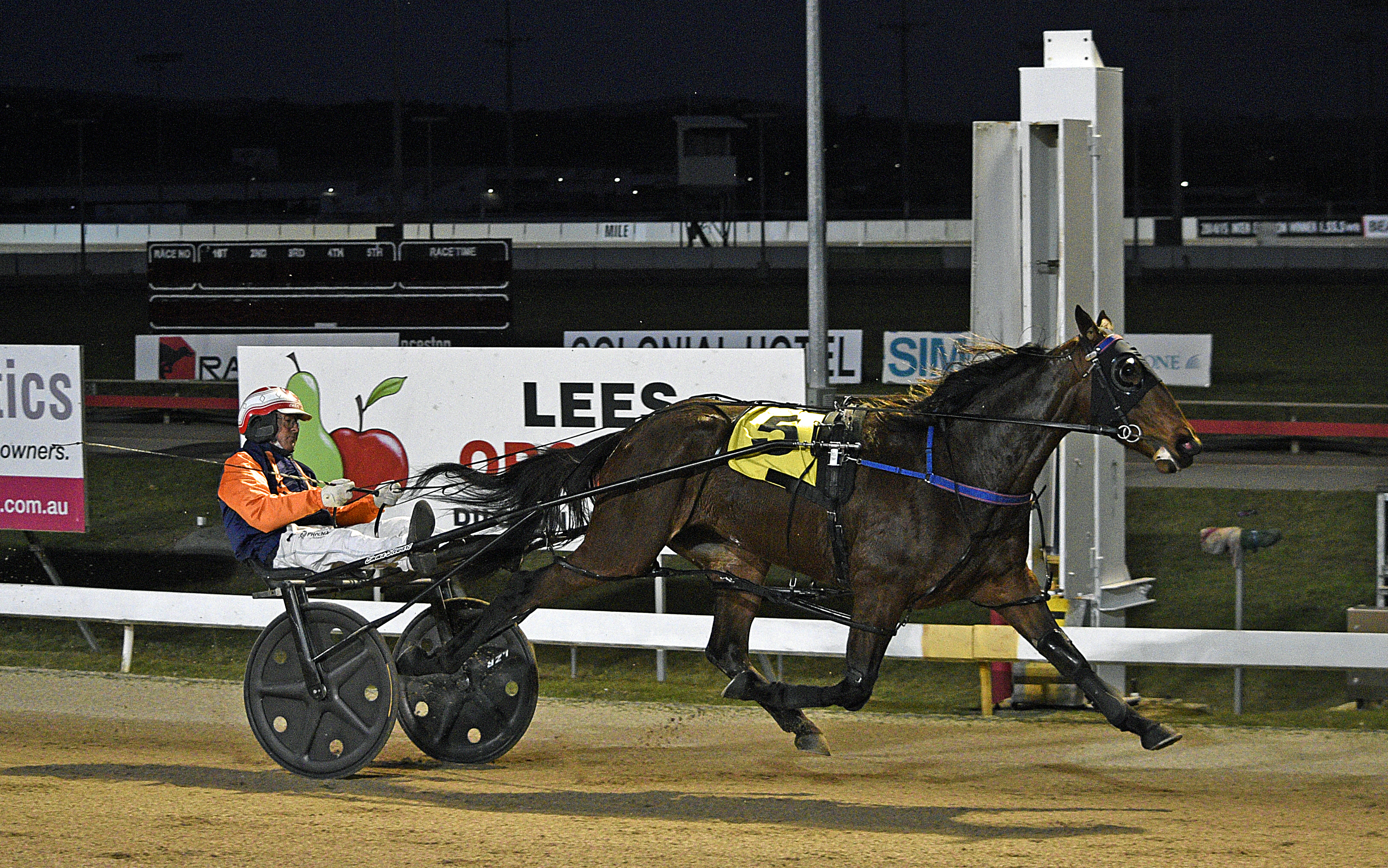 Their feature win on Friday was the Group 3 6ty Bandbox, the Three-year-old Fillies leg of the Tasmanian Sires’ Stakes Series with Nostra Beach.

Punters installed the Somebeachsomewhere-Amarillen filly the $1.10 favourite after her dominant win in the prelude the start prior when she was eased down to win by 49.2m

Driver Chris Alford was caught wide in the run to the first corner before finding the lead in the 2200m event.

“All of the ones inside me had the same intention in wanting to get to the fence and get the good sit,” said Alford.

“I always knew it wouldn’t be that easy the first 400m but when she got there she travelled well and she just paced a bit funny on the last turn but did the job well.

“She’s a high-class filly who is right up with the best ones in Victoria and she’s come over here and gone on with the job which is great,” the master driver added.

It was the fourth win for Nostra Beach this season from five starts and Alford predicted that she would tackle many of the feature three-year-old races this season.

“She will go around in the Vicbred and Breeders Crown like she did last year,” said Alford.

“She quinellaed the Breeders Crown with her stablemate Nostra Villa last year, it will be a bit harder this year as there has been a few nice ones come through but she should be right up there again.”

The winning mile rate was 1:57.7s which broke the previous record on the Launceston track for three-year-old fillies.

Nostra Beach wasn’t the only smart three-year-old to win from the Emma Stewart stable on Friday night with impressive colt Ride High remaining undefeated at his third career start in the opening race of the night.

The Art Major colt went straight to the early lead and was untroubled to win by 29.6m.

“He was really good tonight, he is a little bit green, but he has plenty of talent and he was strong on the line,” Alford said post-race

“He seemed to concentrate pretty well but he still had a gawk around being at some where new but he has plenty of engine there and when he turns into the complete racehorse he is going to make a really nice horse,” The “Puppet” added.

If that wasn’t enough for Stewart and Alford, they took two track records back across Bass Straight with them.

“She has improved a lot, she was a bit weak her first few wins, she kept drawing one and getting good runs but now she is versatile and should go on with the job,” Alford said.

Another Safari smashed the 2200m standing start record by almost two seconds in the fast class race of the evening.

Starting off a 20m handicap the seven-year-old gelding bounced back into the winners’ circle after two unplaced efforts this preparation.

“He was really good, he stepped away quite nicely and settled very well, and we went for a forward move down the straight for the bell as when he is right he is a really nice horse, but he has been off his game for a little while but when he got to the front he was always in control,” Australia’s leading driver this season said.

“The M2 to M4 grade are virtually free-for-alls back home and are really hard races and when you’re not 100 per cent you can’t even get near them,” Alford added.

The last win of the night was with Art Major debutante Perfect Major in the two-year-old event of the night.

Finding the lead, Perfect Major had to be woken up by Alford a number of times in the run.

“He was a bit green, I don’t know if he had every led in a trial before but it was all new to him, but when it was business time he knuckled down very well, there should be a lot of improvement in him,” said Alford.

Friday’s win was almost the end of a busy week for Alford who drove at Hamilton on Monday, Wagga on Tuesday, Shepparton on Wednesday, both Maryborough and Kilmore on Thursday and Melton on Saturday night.