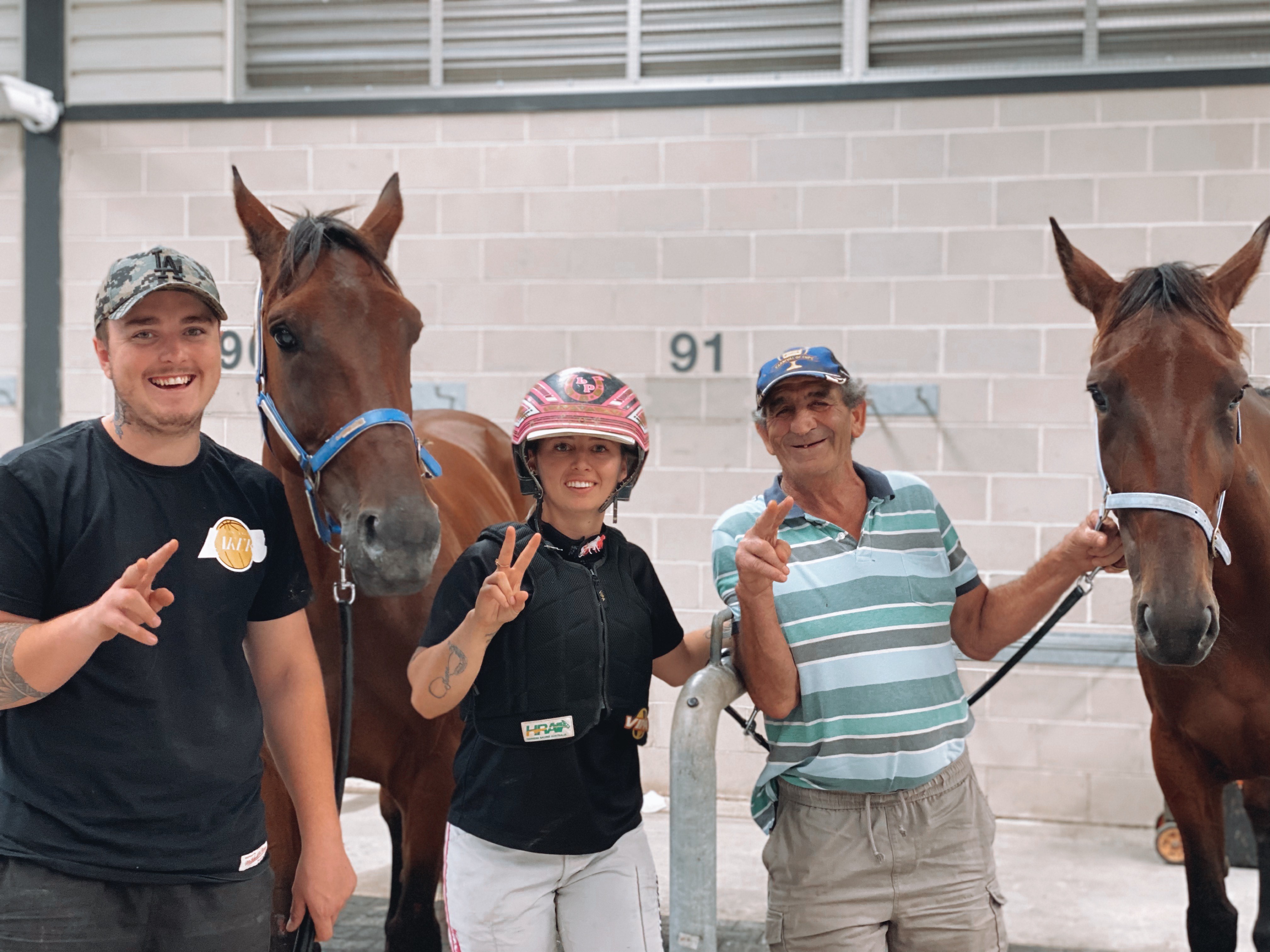 First Menangle double – Michael Ferguson and Lauren Tritton were all smiles after handing Joe Pace his first double at 'Headquarters’.

Joe gets that winning ‘feeling’

JOE Pace jokes that some days his fingers are so numb that he can barely hang onto a glass of scotch…let alone a horse....

JOE Pace jokes that some days his fingers are so numb that he can barely hang onto a glass of scotch…let alone a horse.

The Riverstone horseman is still fighting his way back to full health after a spinal cord operation.

He had to forgo his occasional duties as a clerk of the course at Menangle.

But it hasn’t affected his ability to train…in fact it may have even added to his patience.

And Pace was certainly up for a celebration after training his first Menangle double with ‘inseparable’ trotters Kylies Life and Enjoy An Ale last week.

The knockabout horseman later explained how the pair enjoyed just about every waking moment together and stuck together like glue when they were at home…and it was only fitting they should both win on the same day.

“I couldn’t have been more pleased if I had won the Inter Dominion because they live together,” Pace said.

“And when Lauren [Tritton] asked me for Kylie I told her she couldn’t take her unless she took the other one too because they were best friends.

“They live in the middle of my track, their feed bins are about two metres apart and when they’re not racing Kylie’s the boss but when they are racing he [Enjoy An Ale] is the boss.

“They just get on so well together.”

Pace told Lauren Tritton the first one would win and if the other ‘pilot’ Michael Ferguson drove to instructions he thought he would win too.

“He hadn’t had a start for five and half weeks and he’s a standing start specialist,” Pace said.

“We had to throw him in somewhere and a 2300-metre mobile is not as bad as a mile race because they aren’t running a 27-second first quarter.

“That meant he could get himself into the race and maybe work his way to the lead and I figured if nothing else comes then he’d win.

Pace pointed out that Enjoy An Ale despises that last bend at Menangle and usually loses a length getting around that turn.

“But once he levels for the run home you can drive him like a good horse again,” Pace said.

“He has galloped that many times about 40 metres before he turns for home for some reason.

“But we worked him without shoes and I think he’s  better horse that way because he doesn’t bump his leg.

“He’s always had an issue with his nearside hind.

“But he’s handling it well now and my son David is doing a good job with them all. He has to because I have little feeling in my hands at the moment.”

Pace said Enjoy An Ale had been up for sale a few times but everyone seemed to think there must be something wrong with the horse.

“There’s nothing wrong with him and right now he is actually working faster quarters than he’s ever worked in his life,” Pace said.

“A couple of years ago when I had Shetland on fire this horse could beat Shetland on the track.

Pace happened to be talking to trainer Shane Tritton at trackwork one morning and asked if Shane felt ‘Fergy’ could handle Enjoy An Ale in a race.

When Shane pointed out that Ferguson had indeed driven the square-gaiter in trackwork when they had him, Pace offered him the drive.

“I specifically asked him not to fight with him, not to chase him up or pull plugs on him – just let him work his way up to somewhere near the leaders,” Pace said.

“When he came off the track Fergy asked me how I was breathing during the run…I laughed that I wasn’t breathing at all around the last bend – I was just holding my breath.

“I watched the replay again last night and I can’t believe how he knuckled down, found another gear and got motoring during that last 150 metres.”

Pace had a serious spinal cord operation and jokes he couldn’t even hold a glass of scotch in his hand afterwards – it would just fall out.

“They found the problem, they operated and it’s taken its time to come good,” Pace said.

“Sometimes I have no feeling in my fingers.

“But I drive Kyles Life because no-one else can control her while my son drives Enjoy An Ale in all their work.

“Sure, I’d love to drive in races again and if they can fix my problem I’ll go and do the stress test and get back to driving again.

“The only ones I’d drive in a race would be the trotters.

“I would love to drive Kylies Life in race conditions again because I always believed she was going to be something out of the box.

“The bloke that previously owned her – I kept saying to him that on her trackwork she was a $50,000 horse and the way she’s racing she was a $500 poofter . . . I was being honest with the bloke.

“When I had to stop work I rang the bloke and offered to buy her.

“When Lauren got her 900th winner the other day, the bloke rang me up to say how good she was going and sent me a nice message.

“I first got her through Peter Walsh when I was in Melbourne campaigning with Shetland.

“He asked if I wanted to lease one and I said ‘only if it’s a trotter’ and he said ‘that’s all that this horse will do, trot’.

“I walked in and looked at this horse.

“Just then my son rang and asked me what I was doing, I said ‘I’m actually looking at a horse with a hole in its head’.

“But I told Walshy I’d give it a go. She had been broken in and nothing else had been done.

“I led her off the truck and she was pretty big then and then halfway down the tailgate she decided to take a big dive in the air and kicked me as she was coming down; she knocked me straight over and then took off dragging me.

“She nearly killed me.

“I remember thinking ‘this is not a very good start’.

“So we put her on the jogger for a month and then I put her in the cart and when I went to go she went backwards and just wouldn’t go.

“Then we put the heavy jogger on her and she went 50 yards and then stopped dead and spun around.

“I gave her a hit on the arse and away she went.

“I rang Walshy and said ‘what have you done to me? This thing’s a nutcase’.

“But from that day to this we have got on and I’ve had no more dramas with her.”

Is Spankem heading for Fitzy’s?
Perfect vehicle for satisfying evening
Speedster to continue rise to the top
Fines wholly and partially suspended from four cha...
About author