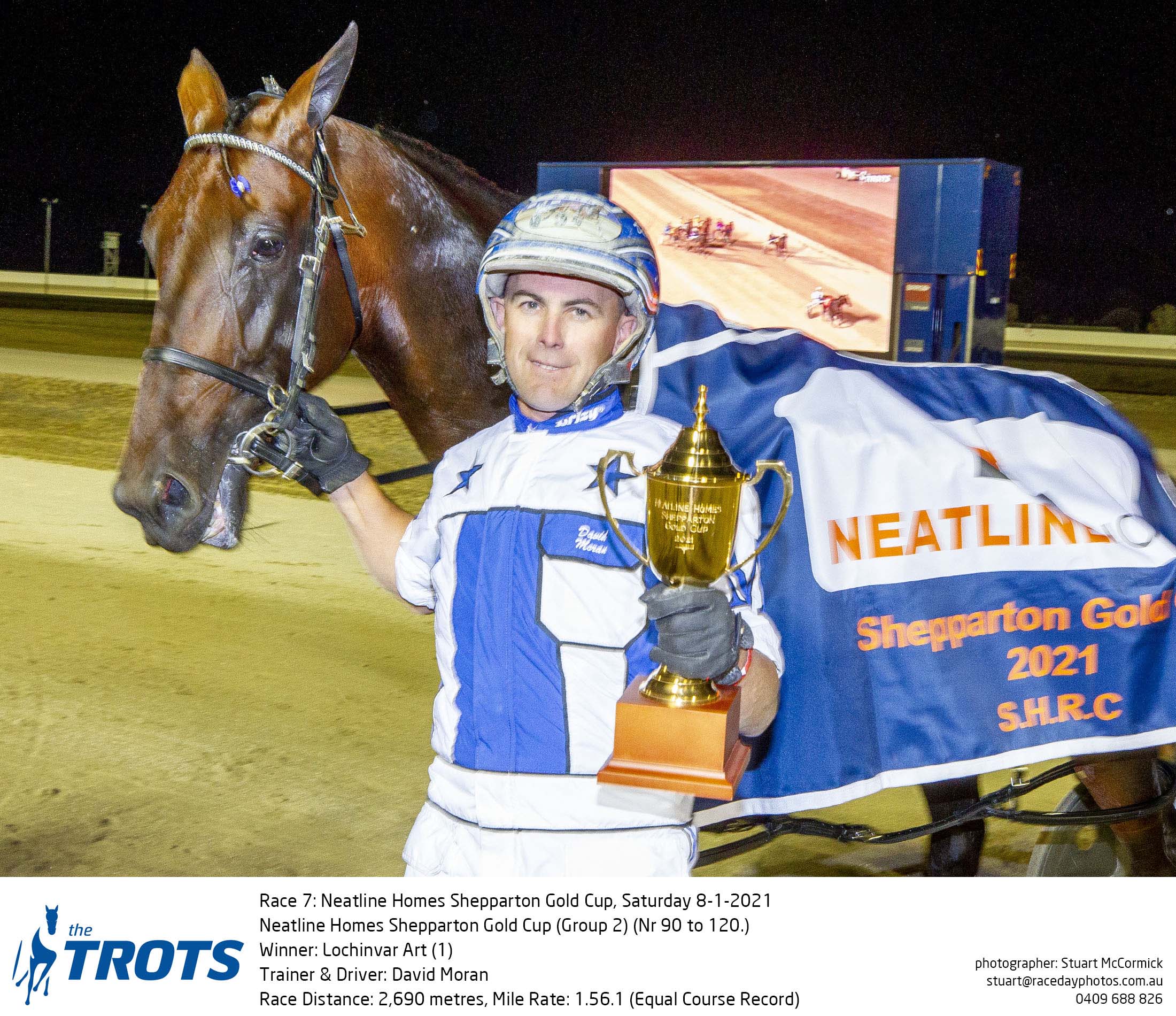 ANOTHER FEATURE IN SIGHT: David Moran with Lochinvar Art after their recent Shepparton Cup win.

Lochinvar Art5 Miracle Mile14
Press Release HE’S been the star of the summer and it seems Victorian superstar Lochinvar Art’s $1m Garrards Miracle Mile aspirations may not be...

HE’S been the star of the summer and it seems Victorian superstar Lochinvar Art’s $1m Garrards Miracle Mile aspirations may not be over, despite his scratching from Newcastle tonight with a hoof injury.

Club Menangle moved quickly to ensure the horse may still get his chance at Australasia’s biggest sprint following his late scratching from tonight’s $100,000 Newcastle Mile.

The club was notified earlier today of Lochinvar Art’s scratching on vets’ advice.

As this was classified as a late scratching, a 10-day stand-down was automatically imposed by the HRNSW stewards, in accordance with the NSW rules.

That 10-day stand down meant Lochinvar Art would not be eligible to compete in next Saturday nights qualifying sprints for the Miracle Mile at Tabcorp Park Menangle.

This opportunity did not extend to the other qualifying races, including the Newcastle Mile.

The club has made no secret that the conditions for the Miracle Mile had been deliberately written to ensure connections supported the entire carnival, not just the Miracle Mile.

This is exactly what the connections of Lochinvar Art have done by nominating their star for the Newcastle Mile, the first of the Miracle Mile qualifiers.

Unfortunately, with the late scratching of the horse and the mandatory stand down, the other qualifying opportunity was taken out of play.

It was the position of the Club that the connections of Lochinvar Art, or any future connections in the same position, should not be penalised when they have supported the carnival.

Accordingly, the club lodged an application with HRNSW, to add a special condition to the existing conditions.

The club pointed out that an invitation would not be issued and that Lochinvar Art, subject to proving his fitness, would be considered for one of the discretionary places in the Miracle Mile field when the Club Menangle Board sat down to determine the final places in the field next Saturday night after the running of the qualifying sprints.

To guarantee a position in the Miracle Mile, nothing has changed. Horses must do one of the following:

If all connections accept their automatic invite, that will leave two ‘discretionary’ spots to be filled.

The Miracle Mile field will be finalised next Saturday, February 27 and will be followed at 10pm by the all-important barrier draw held Trackside at Club Menangle.

Saturday night March 6 is the grand finale of the Sky Racing Carnival of Miracles with the Garrards Miracle Mile headlining a night that includes four Group one races.