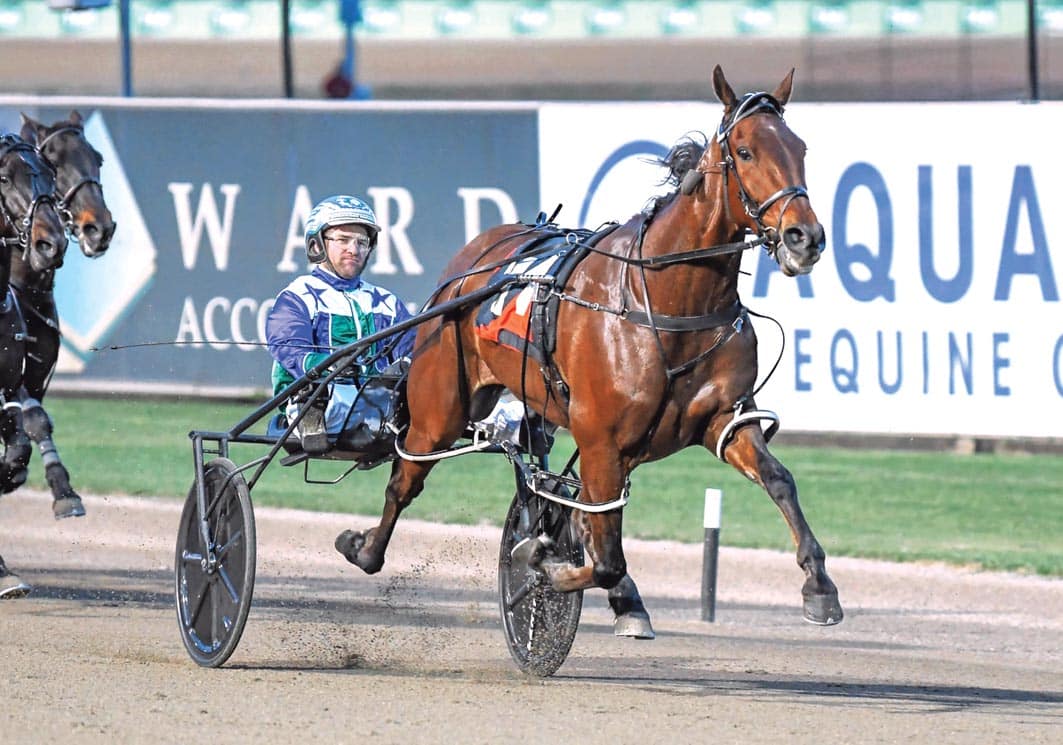 Looking to ‘Cash’ in on an old reputation

Cash N Flow1 King Of Swing24 Luke McCarthy30
THE depth of the Belinda and Luke McCarthy stable has never been more evident. The Cobbitty-based stables will have triple-barrelled attacks on major races...

THE depth of the Belinda and Luke McCarthy stable has never been more evident.

The Cobbitty-based stables will have triple-barrelled attacks on major races in both New South Wales and Queensland tonight.

While the Group 1 $100,000 Garrards Sunshine Sprint at Albion Park is rightly their main objective, the Group 3 Vic Frost FFA at Tabcorp Park Menangle will also be one of their major targets.

It doesn’t seem that long ago that Cash N Flow won an extraordinary 12 races in succession at Menangle and was regarded as second only to King Of Swing as one of the stable’s real stars.

Yet a lot has happened in the 12 months since that run and while King Of Swing has gone on to win back-to-back Miracle Miles, Cash N Flow has been beaten at his past three starts and the eight-year-old has been listed as a $13 chance and is sixth in the betting for tonight’s 1609m sprint, despite drawing perfectly in gate three.

Team McCarthy has three strong chances in the Sydney race: Jack Callaghan will drive Cash N Flow while Ash Hart will be aboard Major Roll ($26) and Chris Geary takes the drive on Lets Katchmeifucan ($67).

Although a trifecta at Menangle looks unlikely, their chances in the Sunshine Sprint are undeniable with King Of Swing ($2.20) facing possibly his greatest test yet after drawing the outside of the second row against a field of stars, including stablemates Alta Orlando and Bright Energy.

Yet ace reinsman Luke McCarthy insists King Of Swing is much more than just a leader.

“He’s shown it before when he’s needed to,” said McCarthy.

“Don’t forget he sat three-wide and then outside the leader for the first lap or more before he eventually got to the front and won the Blacks A Fake here last December.

“Sure, this is a big challenge, but he’s ready for it.

“He’s as good as we’ve ever had him. He’s had a great foundation and he’s very, very fit.

“You don’t run away from challenges like this, you look forward to them, especially with a horse like him.”

His toughest rival is likely to be Kiwi pacer Copy That, well drawn in gate five and with his reinsman Anthony Butt suggesting he cannot go back when the starter let’s them go.

“I have to keep as much space as possible between my guy and King Of Swing when we settle down,” said Butt.

“King Of Swing is a great horse but it’s a different test for him this time.”

Holiday is over . . . the champ’s back in to...
Ima ‘teeny teeny’ Mystery Girl
Luke happy to take a back seat to this dynamic duo
Ego’s aside – he’s ready for a b...
About author