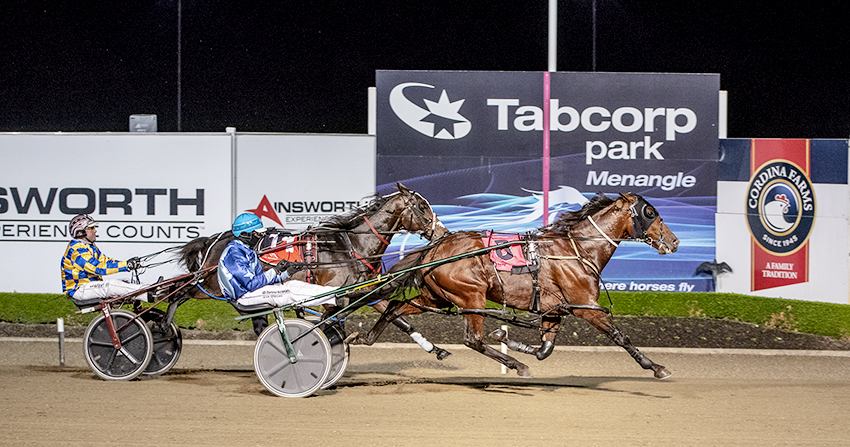 Match In Heaven leaves the big guns in his wake

WE’VE seen it happen countless times in big races . . . and even in some small ones. Like Saturday night’s $20,000 Clubmenangle.com.au Pace...

WE’VE seen it happen countless times in big races . . . and even in some small ones.
Like Saturday night’s $20,000 Clubmenangle.com.au Pace which saw $22.20 outsider Match In Heaven give young reinsman Sean Grayling one of the biggest conquests of his career by beating two of Australasia’s best pacers.
So engrossed were punters with backing Miracle Mile winner My Field Marshal ($2.30 favourite) and the apparent heir to his throne Majordan ($2.40) that they forgot about Paul Fitzpatrick’s up-and-coming five-year-old Match In Heaven, who duly landed the money.
Grayling brought the son of Somebeachsomewhere with a perfect run to account for My Field Marshal by two metres with third favourite Mach Doro ($5.10) grabbing third, just ahead of Majordan.
While they rated 1:52.8 for the mile, it was the opening quarter in a stunning 24.6 that had everybody talking.
Was this the fastest first quarter ever run in this country for the opening split of a mile race?. . . it appears so with the 24.8s run in the Miracle Mile regarded as the “previous fastest”.
No doubt our illustrious readers will let us know if there has ever been a quicker opening split.
Mach Doro steamed out of the gate for Luke McCarthy and quickly found the front with Majordan in the middle and My Field Marshal three-wide but looking to find the front.
While the speed was on My Field Marshal, driven aggressively, found the front as the speed slackened off with a 31.3 second split.
Grayling had no hesitation putting Match In Heaven up outside the leader to race without cover while the other big names were looking for a bit of a breather.
With a 30.6 third split the race was poised for a big finish and Match In Heaven provided that when he stormed to the front turning for home and put away his rivals with a 26.3 final split and a 1:52.8 mile rate.
My Field Marshal did well to hang on for second for Anthony Butt, while Mach Doro was a further 4.5m back in third, just ahead of Majordan.
But it was the old story . . . two big guns, actually three if you count Mach Doro, regarded as the possible ‘knock-out’ horse if there was one . . . and everybody forgot about Match In Heaven.
And he made them pay.