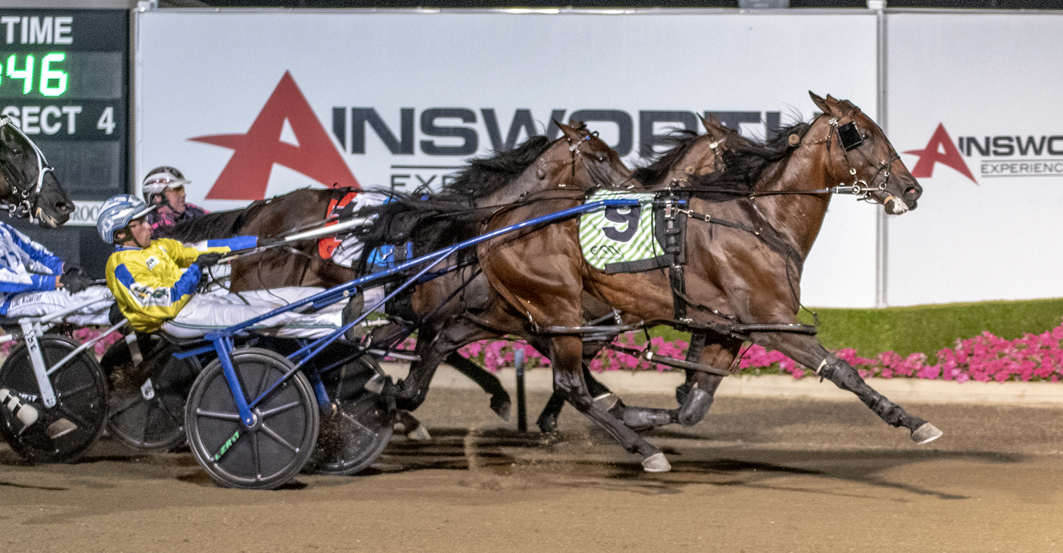 CLASSY youngster Max Delight is poised to continue covering plenty of miles during the next few weeks. Fresh from his record-breaking triumph in tonight’s...

CLASSY youngster Max Delight is poised to continue covering plenty of miles during the next few weeks.

Owned by Tasmanian Michael Maxfield, the record priced Australian Pacing Gold purchase could be taken to the Apple Isle for the state’s Derby on May 5.

“Michael mentioned he wants him to go over for the Tassie Derby so I will have to talk to him about that,” Aiken said. “For now he will go home and have an easy week.”

With local reinsman Todd McCarthy holding the reins, Max Delight began brilliantly to lead from barrier nine before being eased to take a trail behind Lonchinvar Art.

The son of Bettors Delight was then shuffled back when Muscle Factory worked to the front.

Angled into the clear leaving the back straight, Max Delight regained the lead halfway along the home straight before staving off a late charge from his stablemate Malcolms Rhythm to score by a metre-and-a-half.

Lochinvar Art fought on gallantly to be a half-head away third.

“What a way to finish it off,” Aiken said. “To get the quinella is a great result for the stable.

“It was a top run from Max as he came out of the gate fast and still finished it off brilliantly.”

Smolda set the all-age mark during the 2016 Bohemian Crystal, with Demon Delight equaling the time in last week’s Derby heat.

“What a great cause to be a part of”
Birthday acknowledgement and maiden win all in one...
Grayling’s grounding’s paying off
Memories of Mignemi and Bankstown
About author