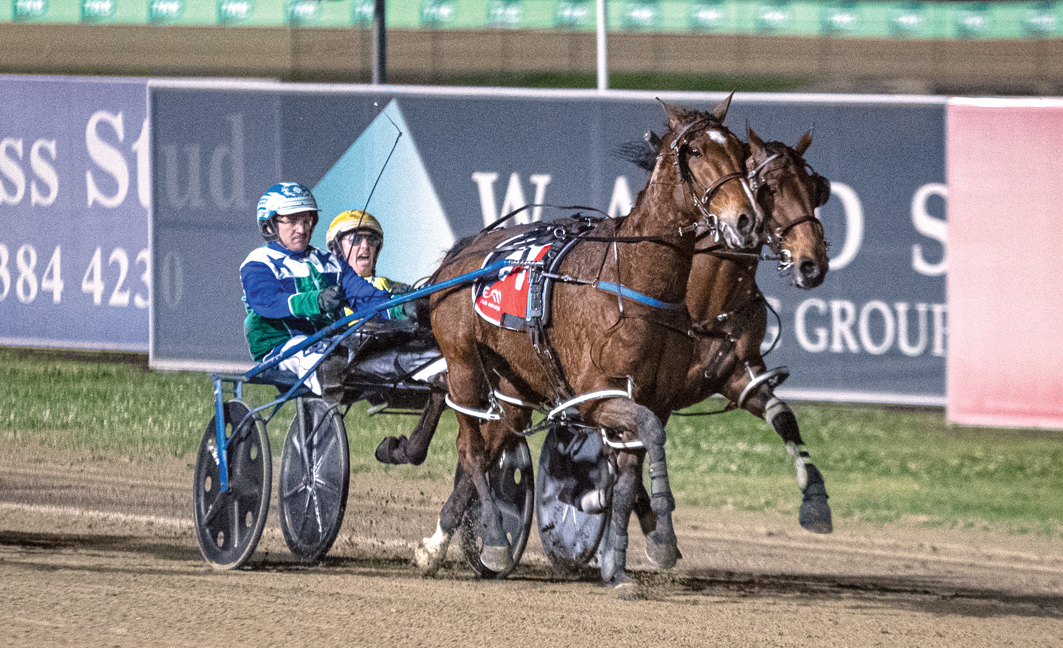 TWO names synonymous with Bathurst harness racing fought out the finish of tonight’s $50,000 Kriden Park Shirley Turnbull Memorial. The amazing part about that...

The amazing part about that statement was that neither of them were named Turnbull.

Despite trainer Steve Turnbull having one of the giants of his stable, Courtsinsession, in the Group Two it was the McCarthy and Frisby families that fought out the race with a masterful drive from Luke McCarthy enough to land the money with Alta Orlando, coming from last at the bell, gaining a lovely three-wide trail into the race behind My Field Marshall before finishing too quickly for his rivals to win the race in a blanket finish, beating Our Uncle Sam (Anthony Frisby) by a narrow margin with the ‘youngster’ of the race, Make Way a close third, just ahead of My Field Marshall.

The 2790-metre marathon was a competitive affair with former Tasmanian pacer Harjeet charging out of the gate to take the early lead with polemarker Make Way and outsider Smokey Quartz happy to take a trail.

Yet the race changed complexion several times with former Inter Dominion champion Tiger Tara quickly putting himself closer to the action, working his way to the ‘death seat’ before then handing up that prime spot to Courtsinsessi.

After a lead time of 1:25.6, the first split of the final mile as put away in 30.3 seconds, and with a subsequent split of 29.5 seconds, the action began to unfold as My Field Marshal made a move from near the tail of the field, coming three-wide while Alta Orlando was quick to latch onto his back for a trail home.

A brutal third split of 27.1 seconds saw Tiger Tara drop out of the hunt before the home turn while Our Uncle Sam came four-wide turning for home with Alta Orlando gaining a split through the middle of the field.

McCarthy was supreme in the run to the line to score a comprehensive win while former Grand Circuit winners Tiger Tara (ninth) and My Field Marshal could not sustain the pressure in the final lap with both missing placings as they hit the line with a final split of 28.5 seconds as the final mile was run in 1:55.9.

My Field Marshall is still a likely Perth visitor for their summer carnival while Tiger Tara’s trainer Kevin Pizzuto might have to reconsider his plans to take his stable star west after the stallion’s disappointing second-up effort.

The other feature of the night, the Ray and Olive McCarthy Memorial was one of the most exciting finishes of the night with odds-on favourite Tingiringi (Jarrod Alchin) looking beaten on the home turn before fighting back strongly to beat Talk About Lexi and Delightful Angel in a finish which had everyone guessing as five horses across the track all hit the line almost simultaneously.

And in the other big race of the night, the $20,400 Club Menangle Pace, John McCarthy was successful with Lord Zin Zan, which with a sweeping run after a patient drive, to score easily, beating Deecaesar and Letspendanitetogetha in a 1:56.5 mile rate.

Veteran breaks 42-month absence from winners’ circ...
Mick Ko’cass with a race-by-race analysis of...
“She has proven she is pretty special”
Players have something to ‘crow about’
About author