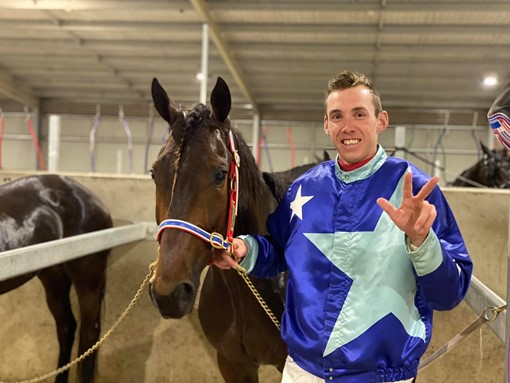 Mitch Turnbull4
MITCH Turnbull has covered plenty of kilometres during the past month, particularly since travel restrictions were lifted, allowing him to drive at Tabcorp Park... 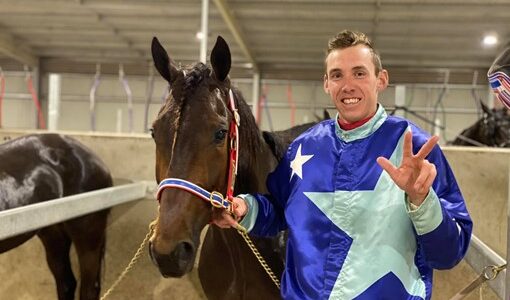 MITCH Turnbull has covered plenty of kilometres during the past month, particularly since travel restrictions were lifted, allowing him to drive at Tabcorp Park Menangle from early October.

Turnbull said it was an ‘unreal feeling’ to be back at Headquarters and he almost made it a fairytale return, just missing by a head to score aboard Viva Las Vegas for his sister Amanda.

The following three weeks saw Turnbull head back to Menangle where he had several drives for his father Steve in the finals of the NSW Breeders Challenge Series and while he failed to snare a winner, he did drive in three of the four Group 1 features.

Apart from being a regular at Bathurst, Parkes and Dubbo, Mitch also headed down south to West Wyalong on October 29 for the Carnival of Cups meeting, landing a winner and running second to Amanda in the Cup.

“I was at West Wyalong in the afternoon, headed up to Parkes that night where I had four drives and then backed up the next night at Menangle, so it was a big weekend for me, that’s for sure,” said Turnbull.

Last Sunday afternoon was a cruisy drive for the talented reinsman when he travelled to nearby Blayney and scored a winning double at the meeting, the second leg aboard Hold My Halo in a qualifying heat of the Peter Marshall Memorial, which brought up his 50th winner for the season.

Tonight at Bathurst, Turnbull has four drives on the nine-race program and will partner the promising The Rainbow Beach in Race 6,, a youngster  he believes has a promising future.

“He is still only a two-year-old and has shown plenty of promise so far,” said Mitch.

“I have a big opinion of this fella and I reckon he has what it takes to race through the grades as he matures.

“Tonight’s race looks most suitable for him.

“He should be able to push forward and be up in the firing line and hopefully from there be in control of things.

“Baxter Red is another nice young horse that Dad will drive in the same race.

“He is definitely the danger to The Rainbow Beach.”

Joes Redemption (Race 3) is another pacer that Mitch will drove for his father, and he looks to have claims as well.

Stable foreman stepping up to the mark
300th win a special moment
Catching up with some ‘in-form’ Turnbu...
About author