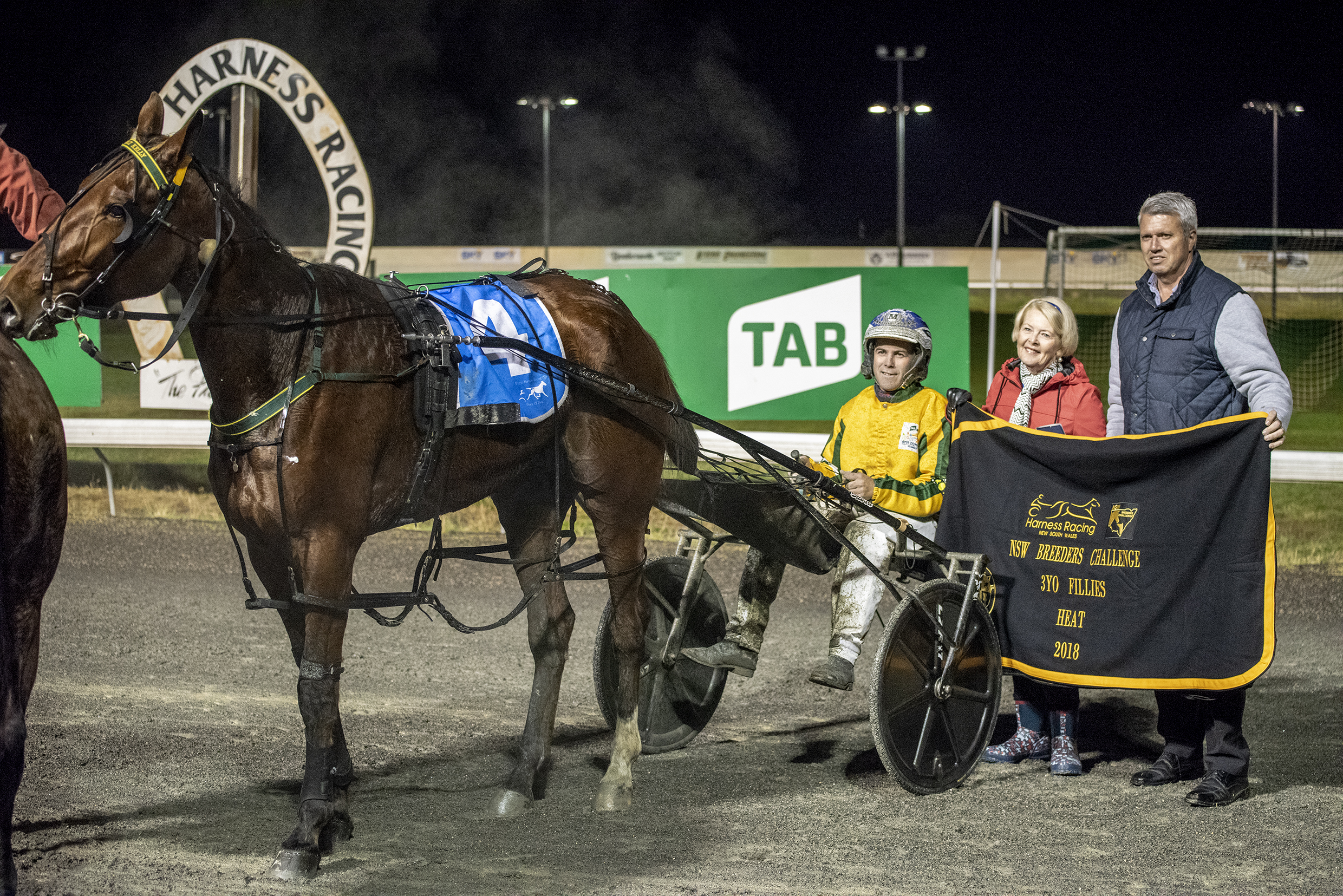 BACK IN THE WINNERS’ CIRCLE: Molly Kelly after her win on Tuesday night. PHOTO: Ashlea Brennan

MOLLY KELLY moved a step closer to another Breeders Challenge final appearance with an impressive all-the-way heat victory at Wagga on Tuesday night. The...

MOLLY KELLY moved a step closer to another Breeders Challenge final appearance with an impressive all-the-way heat victory at Wagga on Tuesday night.

The three-year-old has won nine of her 17 starts and will advance to the semi-finals of the series which she won as a two-year-old almost 12 months ago.

Trainer Emma Stewart missed winning with her two-year-old heat representatives at Wagga a week earlier, but made up for it with Molly Kelly.

The full sister to retired champion Frith is owned in Wagga by Dianne Kelly, who said the juvenile’s return to winning form guaranteed her a place in the semi-finals.

“She hadn’t done as well at her previous two starts so it was good to see her back winning,” she said.

“She showed good speed to lead and finished off really well,” he said.

Meanwhile, Jeradas Delight caused the boilover of the night as the outside of the field downing the favourite Miss Sangrial in the other fillies’ heat.

“It’s a real surprise. I was happy if she picked up $600 for running fifth,” trainer-driver Mark Hewitt said.

“It’s great for the owner who saw her win her first race at her fourth start last time.

“She has kept improving a bit, but I still didn’t expect her to win.”

Hewitt won the Breeders Challenge final several years ago with Burning Stature and is pleased to have another semi-finalist.

“It’s a great series and if she can keep going the way she is then maybe she might make the final,” he said.

The win by Harry Day was well and truly in the family as he took out the colts and geldings’ division.

Harry Day is named after winning trainer-driver Dennis Day’s grandson and is raced by Mark Croatto, who is the secretary of the Goulburn Harness Racing Club.

Day is the president at Goulburn and is looking forward to the semi-finals with the gelding.

“He has been a nice horse all the way through and has a pretty good record with five wins from 15 starts,” he said.

“It will be harder next time, but he is in the semi-finals and you just need a bit of luck.”