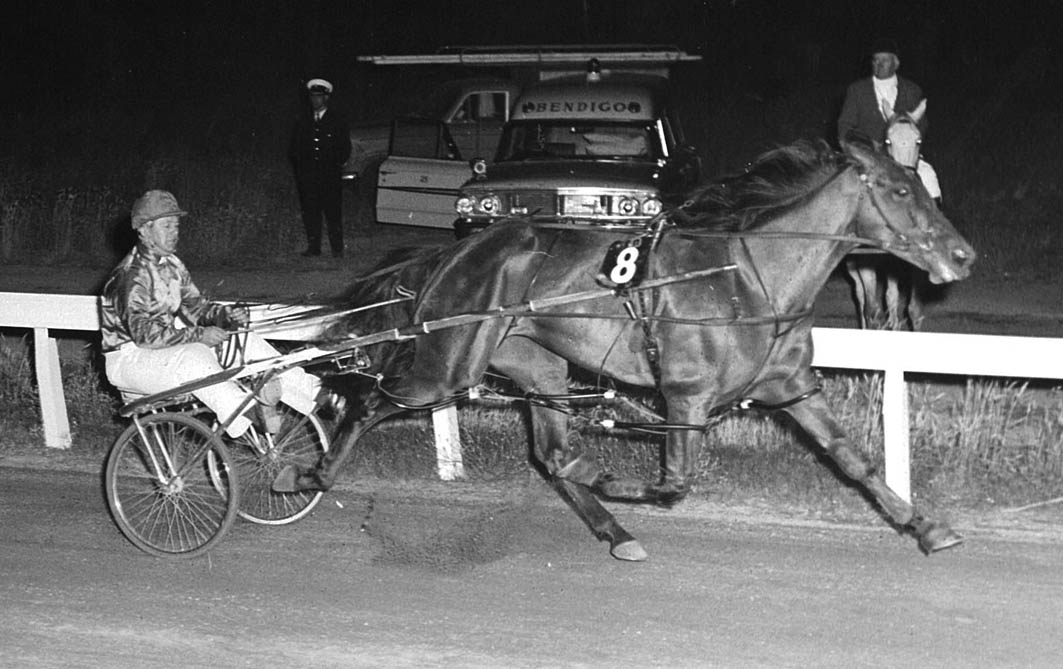 AS PART of the Mares Month of May, which includes the Mares’ Triple Crown at Tabcorp Park Melton, www.nationaltrotguide.com.au will produce features on some...

AS PART of the Mares Month of May, which includes the Mares’ Triple Crown at Tabcorp Park Melton, www.nationaltrotguide.com.au will produce features on some of harness racing’s leading ladies.

WHEN it came to giving the “old boilers club” an official name the choice was obvious – Angelique.

Founded by Judy Cain, Jean Woods, Judy Rothacker and Gaye Donnelley, who remains on the committee as President, the club has been instrumental in highlighting the input women have had in harness racing.

At Tabcorp Park Melton on Friday night the group will once again host the Angelique Club Cup, with the feature part of the Victoria’s Mares’ Triple Crown.

A star in her own right, Angelique’s name goes side-by-side with the late champion horseman, Gordan Rothacker, who passed away in November 2010.

Although linked with many top class performers, Rothacker is best remembered for his association with Angelique.

Bred and owned by Rothacker’s wife Jean, Angelique held the mantle as the premier pacing mare in Victoria during the 1960s.

Included in her wins are the Victoria Oaks, the Lady Brooks Cup (twice), SA Trotting Club Cup, two heats of the 1964 Inter Dominion (runner-up to Minuteman in the Final) and 21 Free-For-Alls.

A bay mare, Angelique was foaled at Rothacker’s Doreen property on October 2, 1958.

She was by Avian Again – a half-brother to 1952 Inter Dominion champion, Avian Derby – from the New Zealand-bred mare Worthy Stavely, which descended from the famous Thelma family.

Thelma, Angelique’s sixth dam, is regarded as one of the greatest foundation broodmares within the realms of harness racing being the ancestress of more than 350 winning descendants.

Angelique remained Rothacker’s favourite, with the late great quoted in a 1980’s interview as saying: “She was a true champion. She used to try her heart out, and she could go just as well free-legged.”

Upon her retirement, Angelique became a successful broodmare.

Her first foal was Gallagher, which was by the ill-fated Grand Monarch. By Light Brigade, Grand Monarch enjoyed great success on the racetrack when driven by Rothacker in the majority of his wins.

Grand Monarch was tragically burned to death in the Victorian bushfires at Lara in 1969 – the same year Gallagher was born.

Gallagher went a long way towards emulating his mother, winning 37 races, including 20 at the Showgrounds – two more than his dam.

He also became the 16th member of the once exclusive ‘Hundred Grand Club’, retiring with earnings of $127,236.

His feature wins include the Ballarat, Bendigo and Cranbourne Pacing Cups, Bendigo and Kilmore Derbys, Victoria Youthful Stakes, the Milk Board Cup as well as a heat of the Victoria Pacers’ Derby.

Angelique’s second foal, in 1971, was Archibald, by Arrival, which recorded 16 wins.

A ‘Jekyll and Hyde’ type, Archibald showed glimpses of brilliance, but was just as well-known for his bad temperament.

Angelique’s offspring include Pepperstorm and Almonda, both by Arrival and unraced; Katherine, by Kentucky, which raced five times for a second at Cranbourne; and Spanish Angel, by Black Gamecock.