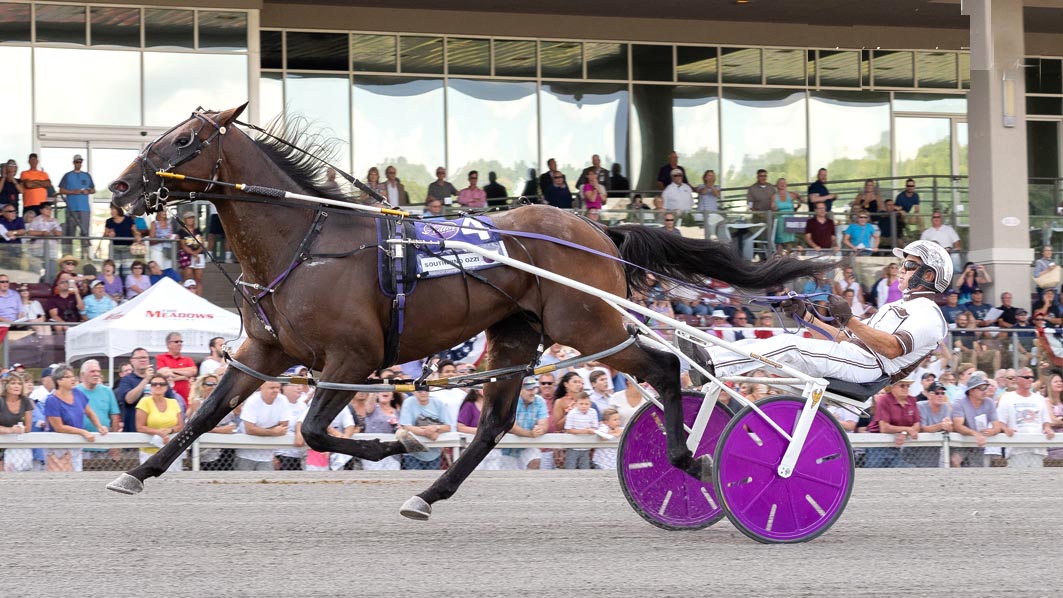 Ozzi to shine in USA major

THE late Anthony Iafelice and Vincent Ali, who passed away in 2017 and 2013, never owned a horse like Southwind Ozzi. But family members...

THE late Anthony Iafelice and Vincent Ali, who passed away in 2017 and 2013, never owned a horse like Southwind Ozzi.

But family members feel their presence as they enjoy the ride with one of the favourites in today’s $640,000 Little Brown Jug.

Iafelice and Ali were friends, sharing a love of horses and harness racing.

Southwind Ozzi enters the 74th Little Brown Jug, presented by the Ohio Harness Horsemen’s Association at the Delaware County Fairgrounds in central Ohio, with seven wins from nine starts this year for a bankroll of $480,935.

His victories include the Adios and Pennsylvania Sire Stakes Final. He is the 8-5 morning-line favourite in the first of two $128,000 Little Brown Jug eliminations, with Brian Sears set to take the drive.

“This is a first for everybody,” MacKenzie said. “My grandparents owned a couple nice horses, but nothing like him. It’s great.

“This is what anybody who buys a yearling or buys a horse is aiming to do. This is what we do it for.

“Unfortunately, (my grandfather) is not here to see this, but I’m sure he’s looking down.”

“My dad never had anything like this either,” Junior said. “I wish he was alive to see it. He’d be going crazy right now.

“That was his dream, to have a horse like this. He’s the reason I do this…he got me involved.”

The Little Brown Jug is the third jewel in the Triple Crown for three-year-old pacers, following the Cane Pace and Messenger Stakes.

Captain Crunch won the Cane but is not entered in the Jug.

Messenger winner American Mercury, one of three Jug entrants from the stable of trainer Chris Oakes, is the 5-2 favourite in the second Jug elimination.

The top-four finishers from each elimination return later in the day for the $384,000 Final.

Southwind Ozzi, a son of Somebeachsomewhere, was purchased as a yearling for $85,000 at the 2017 Lexington Selected Sale.

He was the only horse MacKenzie bought that year for his grandmother and Ali junior.

As a two-year-old, Southwind Ozzi won once and finished second on four occasions.

He was the public elect in the Kindergarten Classic Series Championship last November but was derailed by sickness and finished 10th.

He began this season with three wins and a second before being sidelined for nearly two months because of emergency hernia surgery.

He returned in July to capture the Adios.

“He missed six weeks, but you know what, in hindsight maybe that’s helped him,” Junior said. “Maybe it’s kept him fresh in a sense. He’s racing real well now.”

Junior hoped Southwind Ozzi would have a good season, particularly in the Pennsylvania Sire Stakes, but tried to temper his expectations beyond that.

“My expectations weren’t going to the Jug, that’s for sure,” said Junior, who is a contractor in New York City.

“Who would have ever thought?

“This has exceeded my expectations by far.”

Southwind Ozzi will start from post four in his Jug elimination. The division also includes Hempt Memorial winner Shake That House, which is the 2-1 second choice.

“I just do what I have to do, and I leave the rest up to Brian,” MacKenzie said, referring to driver Sears, who won the Little Brown Jug in 2013 with Vegas Vacation.

Shrewd purchase claims Classic
Reigning champions to miss title defences
Out to make up for lost time on the sidelines
Steph’s ‘Controversial’ ending t...
About author