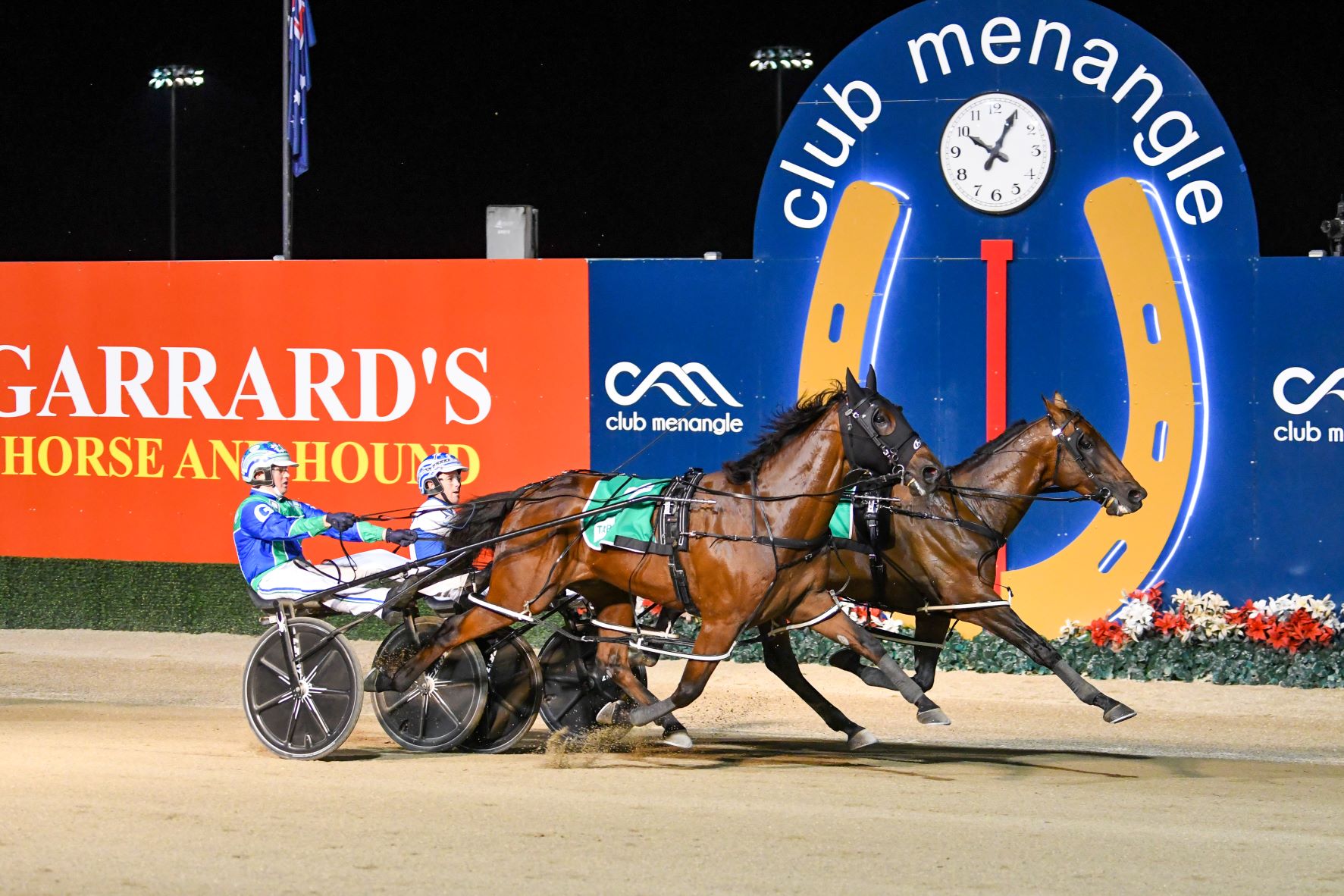 THE first horse ever to win an Inter Dominion on protest thrust 28-year-old Menangle trainer Jason Grimson and 21-year-old  reinsman Josh Gallagher into the spotlight at tonight’s Grand Final of the $500,000 TAB Inter Dominion Championship.

Six-year-old gelding Boncel Benjamin failed by a head to overhaul Expensive Ego in the straight but was then awarded the race after an enthralling protest hearing.

There were tense moments before stewards gave their verdict.

Ace Victorian reinsman David Moran said he might have been a bit nervous before he jumped into the sulky but was a lot more nervous as he stood outside the stewards’ room at Tabcorp Park Menangle and waited to hear whether a protest from Gallagher and Grimson with Boncel Benjamin against the first-past-the-post Expensive Ego, which he drove, was going to be upheld.

In a stunning conclusion to the race, Expensive Ego appeared to run up the track in the home straight, giving Boncel Benjamin the opportunity to run up inside him and possibly take this Inter Dom final.

When Moran realized his horse was moving up the track, he quickly turned his charge’s head back down the track, forcing Gallagher and Boncel Benjamin to change course and come around the Belinda McCarthy-trained Expensive Ego before just failing to run him down on the line. Expensive Ego’s stablemate, Alta Orlando was six metres further back in third place.

Gallagher said he was confident the result would go his way as he felt the run to the inside was there for his horse, before Expensive Ego and Moran cut off their chances.

“This makes all the hard work worthwhile,” said Gallagher, who works full-time for the KerryAnn and Robbie Morris stables, just outside the Menangle gates.

“This probably won’t hit me until I turn up for trackwork before the sun comes up at Menangle on Monday morning.

“To win on my own track at Menangle, it’s the biggest moment of my career and all I can say is ‘thank you’.”

Grimson is normally a trainer of few words but admitted he hadn’t realized the interference was so severe until he was given the chance to look at the replay.

“Once I went into the room and watched the replay, I was confident we could win the race in the stewards’ room,” he said.

“We’ve been having a great run in the past couple of years and I only hope that people can keep sending us good horses like this bloke.

“This horse [Boncel Benjamin] has terrific gate speed and that’s his greatest asset.

“That gate speed was probably what won him this race tonight.”

Disappointment of the race was the horse who, like Expensive Ego, had been unbeaten through the heats. King Of Swing got caught racing without cover over the marathon journey and wilted in the straight to finish a well-beaten fifth.

Robbie has the last laugh . . . this time
Josh eyeing some ‘bonus’ points for ow...
Birthday boys with plenty to cheer about
Josh warms up for a big night
About author