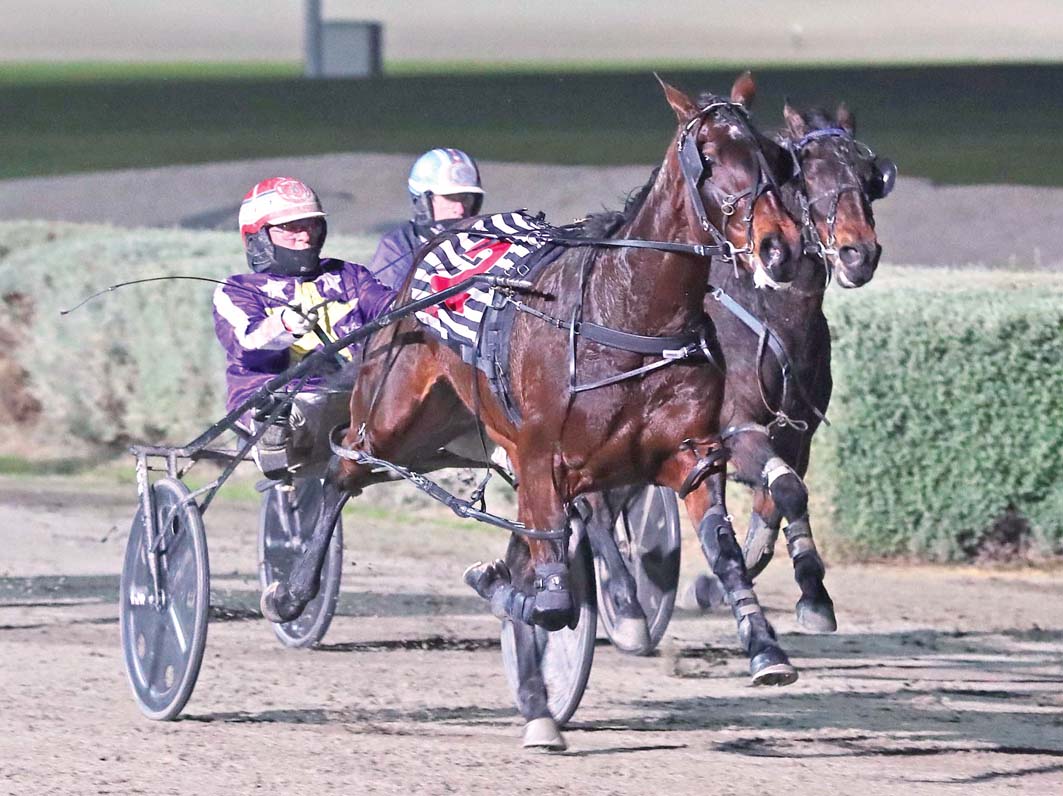 Austrlalasian Breeders Crown9 bendigo1 Purdon2 Styewart1
SATURDAY night’s program at Bendigo is shaping as a ‘Clash of the Titans’. Despite the presence of some strong opposition, record-breaking trainers Emma Stewart...

SATURDAY night’s program at Bendigo is shaping as a ‘Clash of the Titans’.

Despite the presence of some strong opposition, record-breaking trainers Emma Stewart and Mark Purdon are poised to dominate proceedings yet again.

Between them Stewart and Purdon will contest each of the nine Australasian Breeders’ Crown races, with their stables responsible for six favourites.

In the three ‘exceptions’, their respective runners will be among the main chances.

Stewart’s squad includes electrifying two-year-olds Nostra Villa and Poster Boy, which are favoured to win their Finals at Melton on August 27.

A $24,000 Melbourne Australian Pacing Gold purchase for Mervat and Anthony Caruana, Nostra Villa boasts a bankroll of $123,890 thanks to her perfect record from seven starts.

The daughter of Art Major has won key features such as the Group One Vicbred Super Series and Group Two Tatlow Stake.

She faces a tough task this weekend, however, after drawing the inside of the second row.

“The draw is not ideal, but she has proven her class and ability to overcome such obstacles,” Stewart said. “She came from the back line to win the Sires’ and Tatlow, so barring bad luck, there is no reason why she won’t do it again.”

Nostra Villa’s main danger in the series is New South Wales raider My Sweetchilliphilly, which also boasts an undefeated record.

Successful at her five starts for co-trainers Lauren and Shane Tritton, My Sweetchilliphilly has also drawn the second row.

Although scratched from Menangle last week after throwing a shoe, the daughter of Betterthancheddar is in perfect condition according to Shane.

“She will be nothing short of her best for the semis,” Shane said. “Her work has been sensational and she’s feeling terrific.”

A luckless sixth upon debut, Poster Boy has won his seven subsequent starts in stylish fashion, with his wins including the Group One Vicbred Super Series and Group Two Tatlow Stake.

Although drawn the outside of the front row, Stewart has no doubt the son of Somebeachsomewhere can extend his winning streak.

“I’ve made secret of the fact I think he is something special and he is in top shape for his semi,” Stewart said. “His draw isn’t great, but I can’t see it being a problem.”

While Stewart appears to have the two-year-old divisions under control, Purdon’s three-year-olds are poised to dominate their categories.

After making a clean sweep of last season’s Breeders’ Crown, Partyon is back to repeat the dose.

Winner of her heat at Menangle three weeks ago, Partyon has drawn to lead throughout from barrier three.

The filly’s biggest threat – the Stewart-trained Miss Graceland – will begin from the second row.

Also successful in his qualifier, The More The Better is a raging $1.90 favourite for Purdon, despite his outside of the front row draw.

A multiple Group One winner, the colt is unbeaten from four Australian starts, including last month’s Queensland Derby.

War shows fighting spirit
Is history about to be made?
Purdon-Rasmussen calling it quits
Preview: Breeder’s Crown
About author