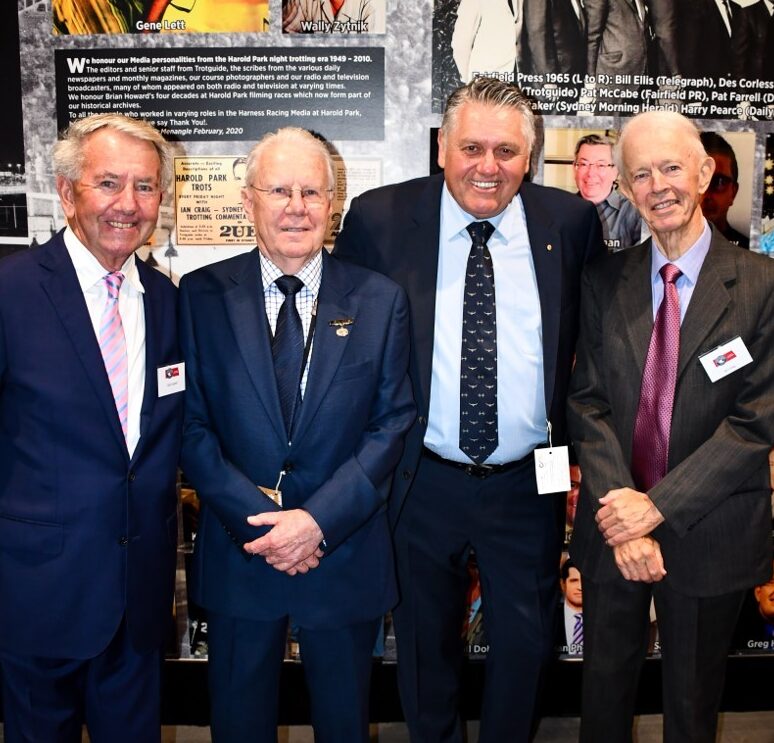 Bill Ellis3 OAM1
HUMBLED – and even slightly embarrassed would probably cover it. Yet Club Menangle executive director Bill Ellis has never been one to blow his...

HUMBLED – and even slightly embarrassed would probably cover it.

Yet Club Menangle executive director Bill Ellis has never been one to blow his own trumpet.

So, the results spoke for themselves this week when his work in harness racing was rewarded with an Order of Australia Medal.

A veteran harness racing writer, a former trainer-driver and currently a valuable voice on the board of Club Menangle, Ellis was quite stunned to think enough people thought enough of his efforts to even nominate him for the award.

“For people to even think enough of you to nominate you for such a prestigious honour – and then follow through with it as well. And then, when you see the Honours list and there are only about 1100 awards given throughout Australia, yes, I found it a little bit embarrassing, to be honest,” he said.

Even since retiring after about 35 years as the harness racing correspondent for the Daily Telegraph, it took some gentle nudging to get Bill Ellis to join the committee at Australia’s biggest and most progressive harness racing club.

Simply, he didn’t want to push someone else out of the committee if they still wanted to be there.

Even when he was urged to nominate, he picked up a nomination form and admitted that he carried that form around in his pocket for several weeks, uncertain whether there would be a vacancy before he would even consider nominating.

“I’m surprised you haven’t put your hand up for the committee,” he was told by one well-known administrator.

Frankly though, Bill Ellis was the perfect fit. He just didn’t know it, yet.

Never one to play politics, he has always been straight down the line with his views – and if he disagrees with the direction some things are going, then he’s happy to tell you so.

Then, while lunching with a couple of prominent harness racing personalities one day, his phone rang and he was again urged, actually, almost ordered, to nominate . . . which he did the next day . . . and polled very well when it came to the vote.

“I don’t play games – one day I might vote with someone and the next day, I won’t,” he said.

One person who did have some influence was his wife Maureen, the woman responsible for Bill being involved in the sport in the first place.

“I remember when I resigned from the Telegraph, they gave me a bit of a farewell at Harold Park and Maureen’s comment was something along the lines of ‘you’ve had him for the past 36 years, now it’s my turn’,” he smiled.

“If not for her, I might never have been involved in harness racing in the first place.”

Ellis became very good friends with the late, great Cyril Caffyn and learned a lot from that legendary horseman when he had his own trainer-driver’s license.

“Like a lot of things in life, I’d love my time over with the horses as I’d love to be able to employ all the things I have learned down through the years,” he said.

And like any good horseman, Bill doesn’t like to pinpoint any particular horse from one era as greater than the rest.

“I was a huge fan of Halwes, and then along came a horse named Popular Alm,” he said.

“Then in more recent times there was Lazarus. It’s just impossible to line them up.

“There’s so many variables; different tracks, training regimes and the breeding has so much to do with it too.”

When it comes to great drivers he has seen, Ellis says he still takes a lot of notice of what drivers do in different races.

“I’ve always had great regard for Luke McCarthy, for instance, from the current crop,” he said.

“I’ve seen a lot of Luke’s wins and lot of those wins have been more as a result of his driving rather than what he’s driving.

“A lot of times I’ll watch the driver’s hands and although it may appear the horse is travelling comfortably, his hands may tell me otherwise.

“Cyril Caffyn was one of those drivers with great hands, and gee, I learned a lot from him.”

Bill Ellis has made a lot of friends in the industry – and he knows the people who have helped accord him the honour of an OAM.

At the top of the list, apart from Maureen, is his close friend and fellow harness racing journalist Harry Pearce, who was the harness reporter for the Daily Mirror up until his retirement from News Limited.

“Naturally, he was one of the first people Bill Ellis spoke with when news of his award eventually became public . . . or just before that.

“Harness racing has been good to me, certainly, and now I’m trying to give something back,” he said.

“We’ve had a few scares along the way, but Maureen and I doing well at the moment.

“Now we’re trying to do some living too.”

Memories of a golden era of harness racing
OAM for one of our sport’s true ‘staye...
About author