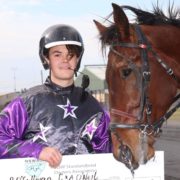 PROMISING reinsman Hayden Lew provided his Dad with the perfect Fathers’ Day gift at Dubbo last Sunday. Making his debut as a driver during the afternoon, Lew registered his maiden victory in front of a hometown crowd. “It’s just like a rush – it’s hard to explain” was how... END_OF_DOCUMENT_TOKEN_TO_BE_REPLACED 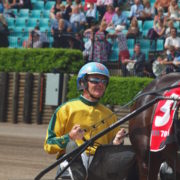 MASTER reinsman Gavin Lang reached a personal milestone thanks to his victory behind Tell Me Tales at Tabcorp Park Melton on Saturday night. By securing the Empire Stallions Vicbred Super Series Final with the filly, Lang registered his 6000th win to become the second person in the Southern Hemisphere... END_OF_DOCUMENT_TOKEN_TO_BE_REPLACED 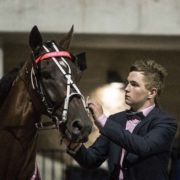 PROMISING young reinsman Ben Woodsford will spend up to three months on the sidelines after breaking his wrist in a horror fall at Newcastle on Saturday night. Woodsford and Maitland reinsman Peter Hedges were sent to hospital after the four-horse fall which also involved Mark Callaghan and... END_OF_DOCUMENT_TOKEN_TO_BE_REPLACED 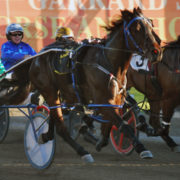 LONG drives and a knack for putting his horses into the action has been paying dividends for young Riverina reinsman Blake Jones this season. Jones heads for Young trots tonight with five genuine chances to add to his burgeoning tally of winners, most of them for the Leeton stables... END_OF_DOCUMENT_TOKEN_TO_BE_REPLACED
Recent Videos View all