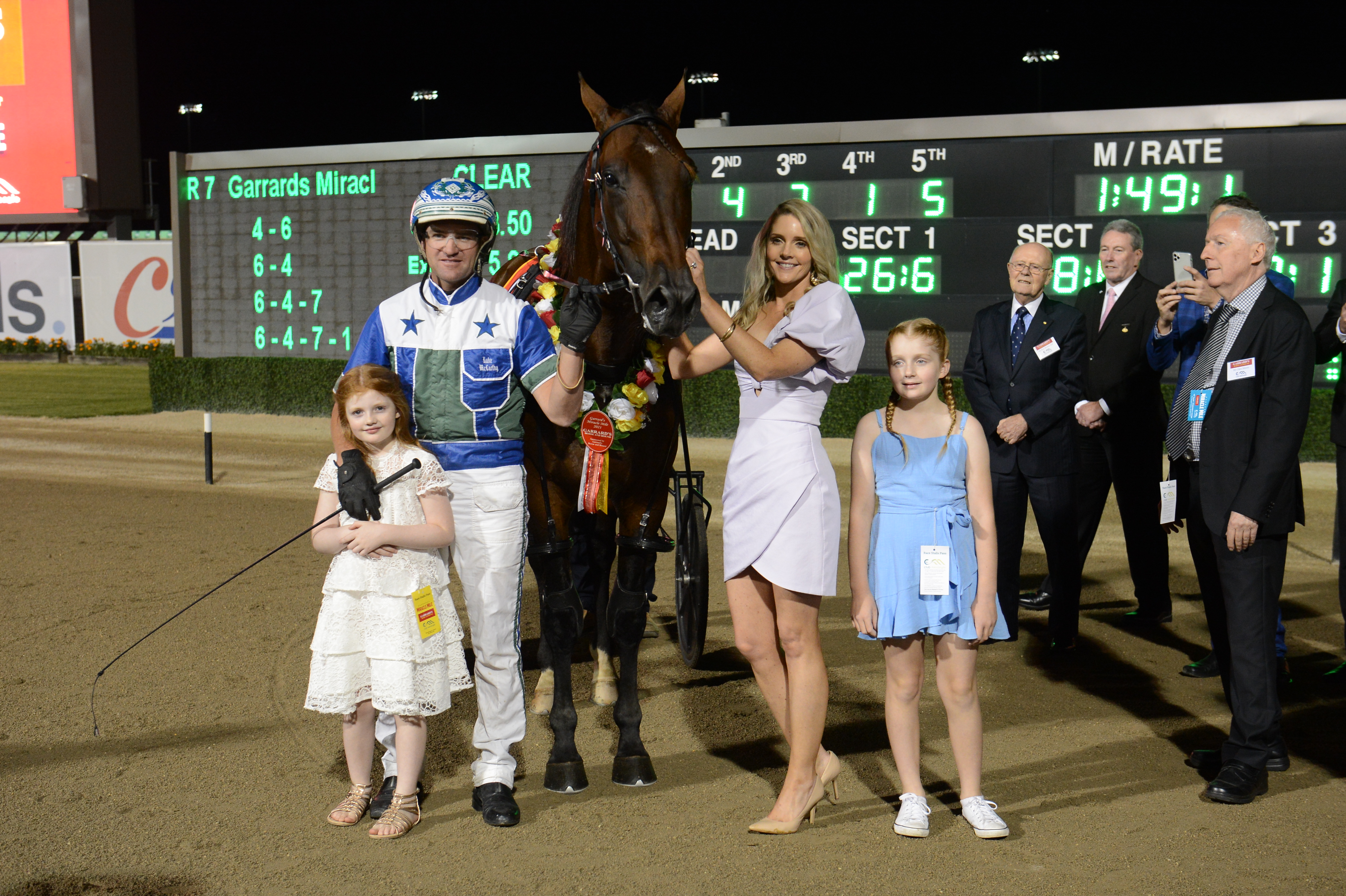 GREAT NIGHT: The McCarthy family were all smiling after King Of Swing's Miracle Mile win.

GOING back-to-back in Australasia’s greatest sprint race was never going to be easy. Yet King Of Swing made it look that way with another...

GOING back-to-back in Australasia’s greatest sprint race was never going to be easy.
Yet King Of Swing made it look that way with another remarkable Group 1 success in tonight’s $1m Garrards Miracle Mile at Tabcorp Park Menangle.
The Belinda McCarthy-trained and Luke McCarthy-driven superstar did everything he had to in surging to a two-and-a-half metre win over stablemate Expensive Ego (David Moran) and Wolf Stride (Anthony Butt).
The predicted early fireworks never really eventuated as The Black Prince held the front from gate one before King Of Swing moved up to his outside and quickly worked past him to take the lead.
To be honest the rest of them were never a chance to run down the superstar son of Rocknroll Hanover as he rated 1:49.1 to win virtually as he pleased.
“He’s such a smart horse . . . and he’s a pleasure to drive,” said Luke.
“He’s had a fairly easy week with plenty of swimming and a few canters and he was right on his game tonight.”
McCarthy explained that as a professional driver he had a job to do and like the other drivers had to keep his mind on the job and not let the pressure be a factor.
“I have so much confidence in this horse . . . he’s just a superstar,” he said.
“He has stamina, he has speed and is just so strong and we really haven’t found the bottom of him yet.
“Winning a race like this is just such a thrill.
“I know it’s hard to compare horses from different eras and I’ve driven some good ones.
“But King Of Swing is close to being the best horse I have driven.
“And he just keeps getting better; he’s unreal.”
While the race is renowned for the speed it brings, King Of Swing didn’t let the others into the race.
After a 26.6s first split of the mile he was actually able to ‘walk’, by his standards in the second split, which was a leisurely 28.6s.
That left plenty of fuel in the tank as McCarthy upped the ante with a 28.1 third split before zooming home in 25.9 to give nothing else a chance.
Expensive Ego tried hard and lost no admirers with his plucky second while Wolf Stride was one of the few to make ground late for third, albeit four and a half metres behind the second horse.

He is a pure excitement machine….
Popular reinsman riding the crest of a wave
Record breaker back in action
Bride on the track, but when is the wedding?
About author