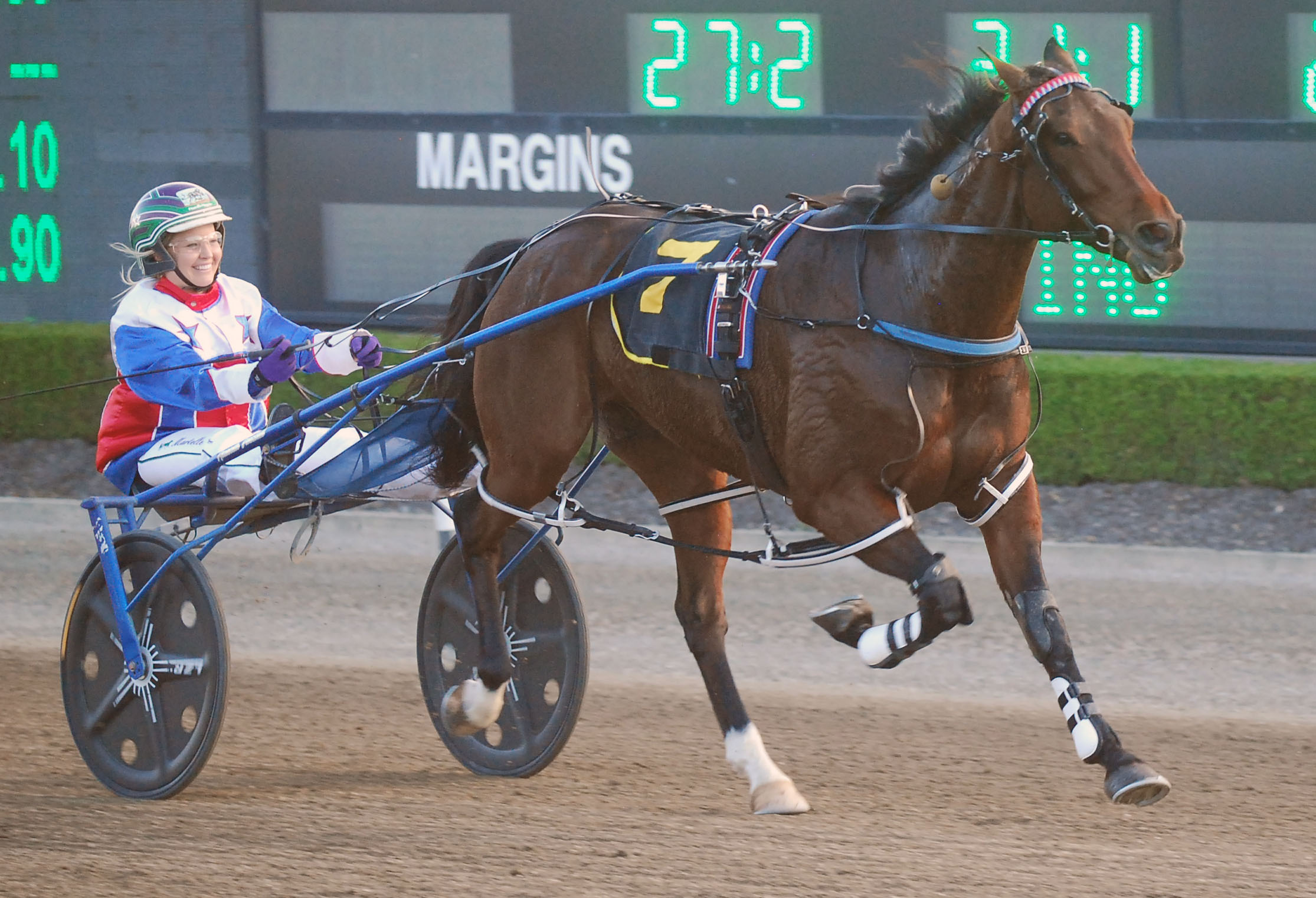 GRINNER AND WINNER: Martelle Maguire is all smiles as she crosses the line a winner at Menangle on Tuesday. PHOTO: Sean Cunningham.

THE SMILE OF A WINNER

THE day we see Martelle Maguire go across the line and she’s NOT smiling we can probably wave her goodbye. That’s because she’ll give...

THE day we see Martelle Maguire go across the line and she’s NOT smiling we can probably wave her goodbye.

That’s because she’ll give it away if that winning smile ever fades.

There is no better advertisement for this sport and no bigger smile than this likeable young woman who continues to be the breath of fresh air this sport so badly needs.

Maguire showed poise and patience to win with four-year-old gelding Ellmers Image at Menangle on Tuesday afternoon and, as usual, the smile said it all.

“We didn’t really expect to beat Tim Butt’s horse, Franco Landry,” said Maguire after scoring a stunning 5.9m win over despised outsider Shanocon with odds-on favourite Franco Landry a disappointing third, after appearing to drop the bit on the home turn when he looked to be floundering.

Maguire began working with Amanda Turnbull’s Bathurst team on Anzac Day (April 25) and is now based at Bathurst . . . and loving it.

“It is actually a bit closer to home at Leeton, but having said that I have only been home once since Christmas, just been too busy working,” she said.

“I just needed a change of scenery like this and decided it was time for something a bit different,” said Maguire.

“It turned out Amanda was looking for someone to help her out and so far it’s been really good.

“I did drive a winner for her in an invitational race once before but she was impressed with how well this horse went . . . as I said we didn’t really expect him to win today.”

Rating 1:53.8 and coming from near last was a bonus as Ellmers Image picked up his rivals with a quick sprint up the home straight to win going away with Maguire grinning from ear-to-ear as she realized she had them ‘done like a dinner’.

“Winning is always good fun and if you don’t like that then you shouldn’t be in this sport.

“And yes, it is a pretty good feeling when you know you have them beaten.”

Maguire is normally the best-dressed lady at the races when she’s not in the sulky too and turned heads at the Bathurst Gold Crown carnival.

But she’s pretty smart in the sulky too and even the purple gloves she drove in were a nice touch and seemed to go nicely with the red and white yoke, blue stars, braces and sleeves of the Turnbull team.