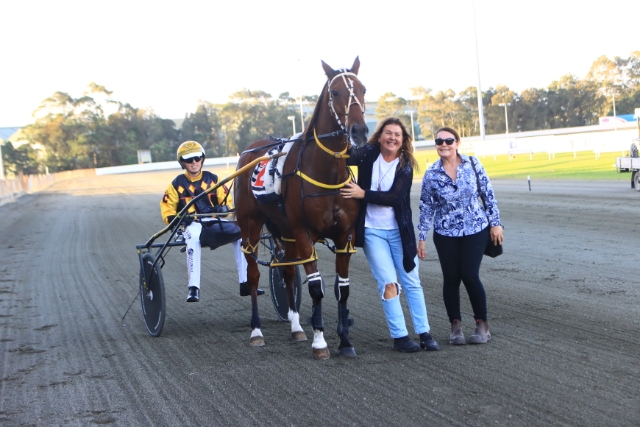 A delighted Lisa McDonald with Christian Brother after their win at Newcastle on Monday. PHOTO: Coffee Photography.

This veteran pacer could take himself to the races

Lisa McDonald2
TRAINER Lisa McDonald jokes that her pride and joy, Christian Brother, could probably load himself in a float and get himself to the races,...

TRAINER Lisa McDonald jokes that her pride and joy, Christian Brother, could probably load himself in a float and get himself to the races, he has done it so often.

The Fullerton Cove (Port Stephens) trainer was in the mood for celebrating after her veteran pacer broke through for win No 12 at Newcastle on Monday at his 250th start in a race.

And he is so enjoying it at the moment that McDonald has found herself inquiring how long she will be allowed to keep racing the son of Christian Cullen.

“We have tried to retire him but he fretted and sulked and looked so sad and forlorn in the paddock and kept looking in the house, so we eventually began using him to help train our two-year-olds,” said McDonald.

“Then we used him as a travelling companion when our other horse, Master Catch, was racing at Menangle and things have sort of gone on from there.

“We’ve had the vet checks done and he’s as sound as a bell – and besides he just loves it.

“And it’s nice to be able to see something positive with an older horse, who still loves his racing.”

McDonald was well aware how important Christian Brother’s 250th race start was at Newcastle on Monday.

“I told Jack Callaghan to lower the handlebars and make sure of it, as 250 starts was a real milestone,” she laughed.

“I said I had been setting the horse for this race for about five years.

“Yes, I really did think he could win, he’s been going along so nicely.”

McDonald only has a small team but has a great strike rate and says the Corona virus meant she lost a part-time job she had which had enabled her to focus completely on training her horses and be sure to have them ready for the races.

“Not that Christian Brother needs much preparation,” she said.

“Honestly, he could train himself, he knows exactly what he has to do and just goes out and does it.

“He’s such a beautiful animal.

“I might be the only one praising the new handicap system. It’s sure worked out well for us.”

McDonald said she couldn’t be prouder of the horse’s effort to score.

“I only have the two in work at the moment and Master Catch won last week so I guess that makes me the leading trainer in this area at the moment,” she grinned.

“I also have Master Catch’s sister here, which I am working with.

“I have decided to breed my own now and we’re really happy with how it’s all working out.

“We’re near Williamtown and it’s a wonderful spot here with our own track and four stables – and that’s it.

“Unfortunately, I got home and Foxtel didn’t work so I couldn’t sit down and watch the replay 100 times.

“I told Jack [Callaghan] he was coming out of the gate really well . . . so we dared to dream.

“He suffered a bit of a foot problem for a short while but Darren Reay shoes him and he’s done a good job.

“With no Sydney blokes coming up here to race, due to the restrictions, it might be a bit easier to win at the moment.

“But he still ran a competitive time.

“In between races I just let him do a few rounds with the trailer, He might go to the beach for a paddle and I do know him pretty well.

“I think he’s had 208 starts or something like that, just at Newcastle – so seriously he could take himself there and put his own harness on.

“Some people had him lined up for pleasure driving but I decided when he was only 10 that I couldn’t part with him.

“I just love this old fellow.”

When I suggested maybe it was all the TLC that makes these older horses race on so happily.

“My son jokes that I love this horse more than I love him,” she said.

“I always watch when that other veteran pacer, Beetson goes around too.

“You can see that his trainer [Peter Trevor-Jones] also loves his old horse.” 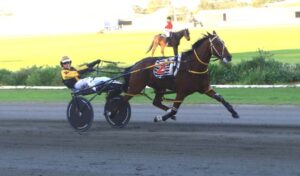