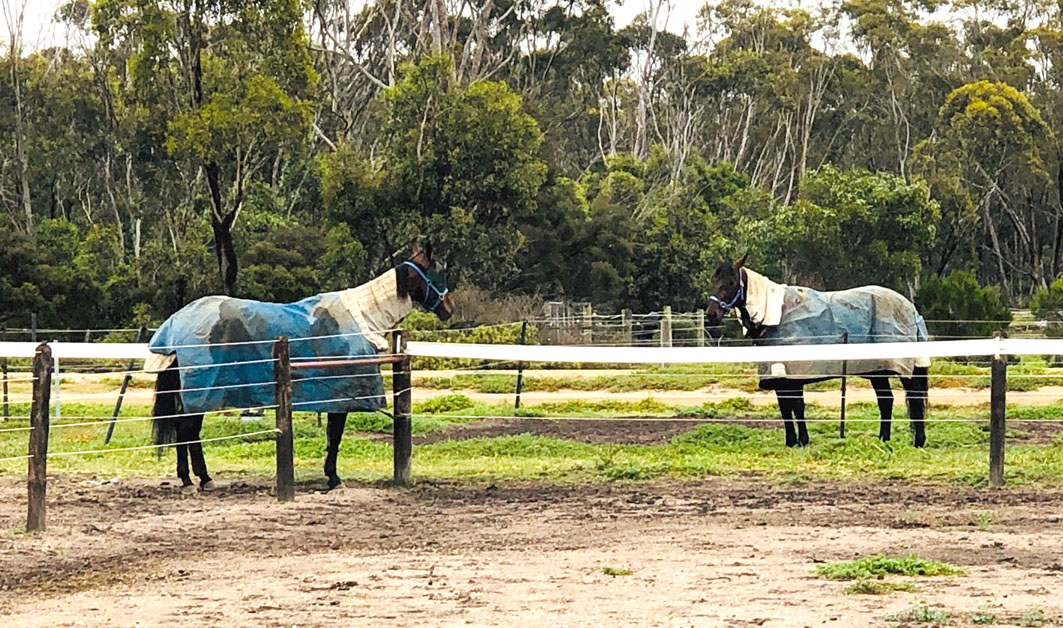 AFTER spending most of the week sizing each other up, star trotters Tornado Valley and Speeding Spur will settle their differences at Tabcorp Park...

AFTER spending most of the week sizing each other up, star trotters Tornado Valley and Speeding Spur will settle their differences at Tabcorp Park Melton on Saturday night.

The dominant duo throughout the heats, Tornado Valley and Speeding Spur are expected to go ‘toe-to-toe’ in the Group One Inter Dominion Final.

Making the trip across the Tasman for the prestigious Championship, Speeding Spur has been stabled at Andy Gath’s property – which just happens to be Tornado Valley’s home!

“They’re definitely frenemies,” Gath joked. “Their yards are close together and they spend a bit of time staring each other down.

“They raced against each other in the Ballarat heat, which Tornado Valley won, so he may be talk a bit of trash to get into Speeding Spur’s mind!”

While Tornado Valley has the winning edge, Speeding Spur has received an advantage via the barrier.

Co-trained by John and Josh Dickie, Speeding Spur will begin from pole, which will see the quick beginning son of Pegasus Spur pushed forward in search of the lead.

The stallion led throughout in his two heat wins, while racing outside Tornado Valley before finishing third in the other qualifier.

Speeding Spur is no stranger to top shelf glory at Tabcorp Park, having captured the Great Southern Star and Breeders’ Crown at the venue.

The only undefeated runner in the series, Tornado Valley will begin from barrier six in the $150,000 decider.

Pleased with the way Tornado Valley has handled the three runs in a week, Gath is confident the son of Skyvalley can complete a clean sweep.

“He has pulled up terrific from the heats and has been feeling great this week,” Gath said. “I couldn’t be happier going into the Final, now it’s a matter of what happens on the night.”

Although he considers Tornado Valley’s draw to be “reasonable”, Gath was quick to point out the task at hand given Speeding Spur’s starting position.

“Looking at the field overall, Tornado Valley has a reasonable draw,” Gath said. “But my main opposition has drawn significantly better.

“Speeding Spur has been the one to beat before the series started and that hasn’t changed.”

Despite Tornado Valley and Speeding Spurs dominance, Gath stated the Final is anything but a two-horse race.

After winning her two qualifiers with ease, the Gath-trained La Coocaracha was the $1.60 favourite in the 2002 Inter Dominion Final at Harold Park.

Caught three-wide for a vast majority of the race, La Coocaracha finished second behind the Gavin Lang-driven Game Bid.

Ironically, Lang will once again pose a threat as he partners the ultra-consistent Save Our Pennys.

With Gath’s reinswoman-wife, Kate, to hold the reins, Tornado Valley is a $1.70 favourite with TAB Fixed Odds.

Speeding Spur is on the second line of betting at $3.10, with Save Our Pennys rated as a $14 shot.

“We’ve still got to get out there and get the job done.”

HOOFNOTE: Gath will be hoping the inclusion of the Derby Royale Free-For-All on Saturday night’s program is not a bad omen. Derby Royale at 50/1 beat the 4/9 favourite Maori’s Idol in the 1978 Inter Dominion Final at Moonee Valley.