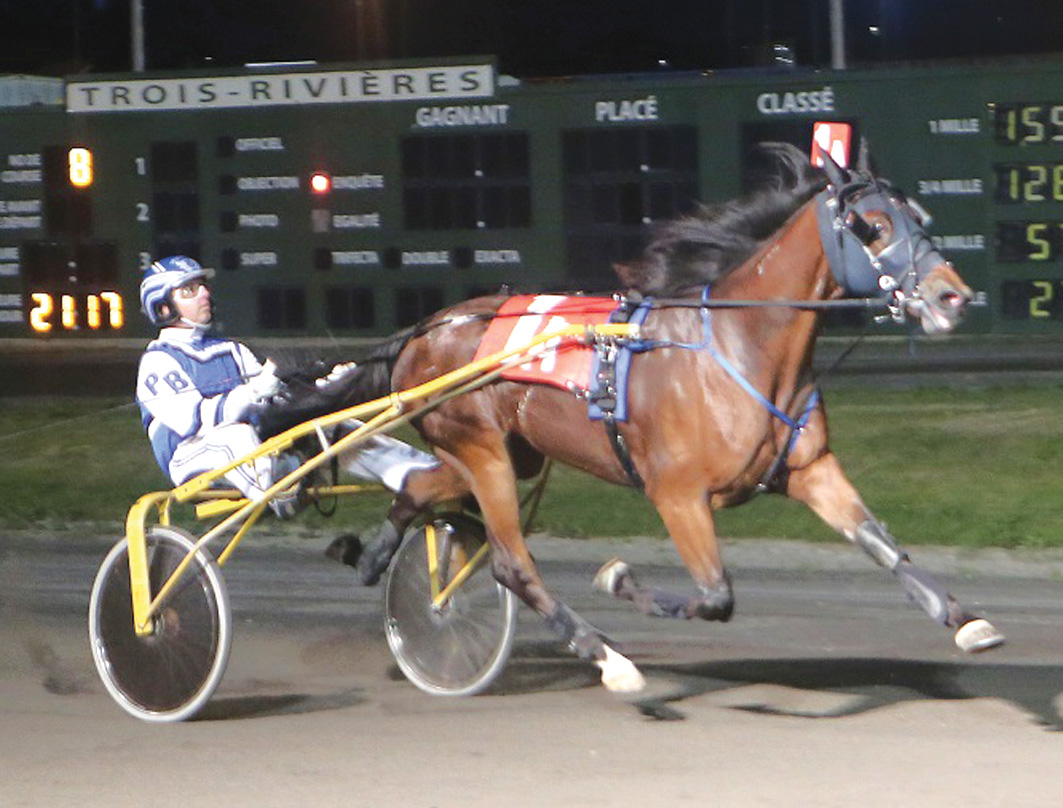 IT WAS just a fortnight ago Only For Justice set the track record at the Hippodrome 3R for three-year-old trotters in 1:57.4, and now...

IT WAS just a fortnight ago Only For Justice set the track record at the Hippodrome 3R for three-year-old trotters in 1:57.4, and now Cesar Duharas shattered that record with a 1:56.1 triumph in last night’s second round of the Breeders’ Cup Series.

The entry of Only For Justice and stablemate Clevisse, were the overwhelming 1/9 favorite in the eighth race $10,000C division for trotting colts, but both horses went off-stride after the start of the race.

Cesar Duharas left hard from the outside post seven position for driver Pascal Berube and shot to the early lead with no one close behind him. He led the field by the opening quarter mile in a speedy :27.4.

They then opened up on the field at the half mile in :57.2 with Mister Sky (Marie Claude Auger) a distance second.

Past the three-quarters in 1:26.2, Cesar Duharas poured it for Berube, winning in a rout by 29 and one-quarter lengths in 1:56.1. Mister Sky was second with SOS Turbo (Tyler Jones) third. Only For Justice finished fifth.

It was the first win this year in four starts for Cesar Duharas and a lifetime mark for the gelded son of Muscle Massive from the Cantab Hall mare, Cleopatra Duharas.

Cor Leo, making only her second lifetime start, scored a 15-1 upset victory in capturing her $10,000C division of the Breeders Cup Series for three-year-old trotting fillies.

Starting from the far outside in post position eight, Cor Leo and driver Stephane Gendron were able to get away in fourth place after the start of the fourth race.

My Lady Hall with trainer/driver Serge Nadeau in the sulky were the early race leader with Choo Choo Blue (Jocelyn Gendron) in second place and Justice Society (Stephane Brosseau) on the outside in third.

After the opening quarter mile in :29.1, Brosseau continued on the outside with Justice Society, challenging My Lady Hall for the lead past the half mile marker in 1:00.1. All the while, Cor Leo was stalking the leaders in fourth place.

As they started down the backstretch, Justice Society started to overtake My Lady Hall and then came Cor Leo into the hunt, going briefly three-wide. Justice Society cleared to the lead by the three-quarters in 1:30.3 with Cor Leo gaining on the outside with every stride.

Coming down the stretch, Cor Leo was able to collar Justice Society and go on to win the race by three-quarters of a length in 2:01. Justice Society was second with Choo Choo Blue third.

It was the second lifetime start and first victory for Cor Leo, a daughter of E L Titan, who is trained by Maxime Velaye for the Proviquante Stable of Mirabel. Cor Leo paid $32.20 to win.

There are three weeks of preliminary competition in the Breeders Cup Series. The top eight point earners will return to compete in their respective divisions with a purse of $65,000C on Sunday, September 8.