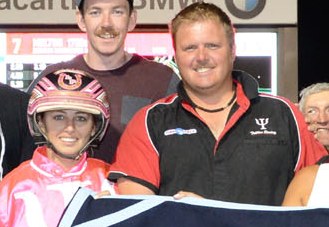 TRITTONS TO ICE THE CAKE

Geary1 McCarthy9 My Sweetchilliphilly2 Tritton2
PAUL MICALLEF IT’S been a big week so far for Shane and Lauren Tritton and wins by stable favourites Mach Beauty and Lombo Kotakinabalu...

IT’S been a big week so far for Shane and Lauren Tritton and wins by stable favourites Mach Beauty and Lombo Kotakinabalu on Saturday night at Menangle will be icing on the cake.

They first of all celebrated the birth of their son Levi on Tuesday morning before champion 2yo filly My Sweetchilliphilly easily won her heat of the Breeders Crown at Menangle later in the day.

“She did it under her own steam, Shane said. “Chris (Geary) didn’t even pull the ear plugs. That was her first run since April and will only improve off that.”

Mach Beauty and Lombo Kotakinabalu both look perfectly placed under the new handicapping system  and are ready to strike at Menangle on Saturday.

They will be driven by young stable driver Chris Geary who is in a three-way battle for the Metropolitan Drivers’ Premiership.

He is snapping at the heels of brothers Luke and Todd McCarthy who are tied in first place with 33 wins while he sits on third  with 29.

Geary is making the most of his opportunities for the Tritton camp with Lauren expecting to be back in the driver’s seat in a month or two.

Shane, a keen supporter of the new handicapping system, agrees both his stable stalwarts can lead and will be hard to run down.

“That was the idea of the new system. You give these sought of horses the chance to keep earning when their not quite at their best,” he said.

“Mach Beauty is definitely my favourite horse. He is the one who started everything. If it wasn’t for him I probably wouldn’t have had the horses I’ve had,” he said.

He was beaten in a photo finish last week after surrendering the lead early to eventual winner and favourite, Presidentialsecret.

“There doesn’t appear anything to jump out in the race that I would want to sit on this week,” he said.

“He usually gets better with racing and should hold the front and take a lot of running down.”

“He’s been very much my horse for a long time. He has taken a lot of work,” he said.

“The horse has had a couple of hard runs and  looked winner top of straight before condition gave out.

“This time around if he can hold the front he’ll certainly take some beating,” he added.

All the Banta’s about the ‘Bar Room...
Looking for a night out with ‘Soho’
Team Tritton targets treble
Top two-year-olds clash
About author