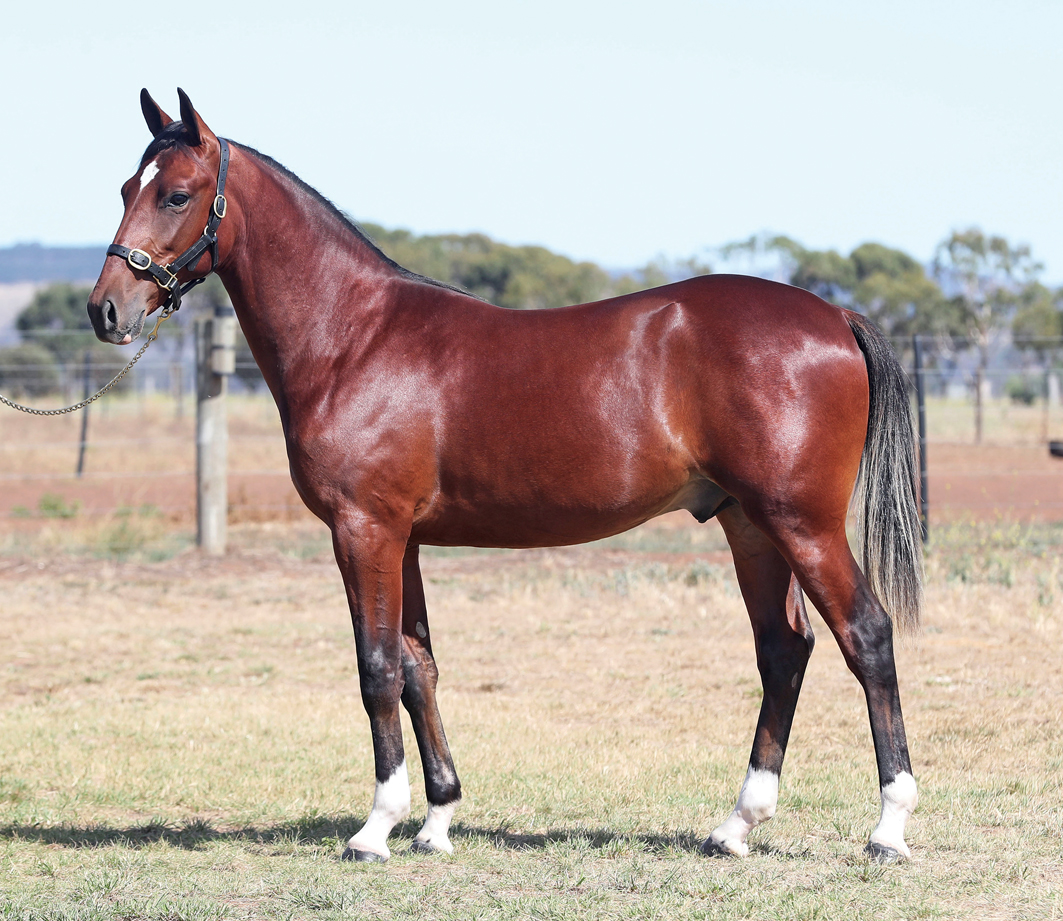 Where are they now?

Breeding, conformation, the way the youngsters moved, their temperament and so on played no role in the article – with each selected for their white socks via photos submitted by sellers and breeders.

Of the 13 named, 12 went through the APG sale ring – but a year later we’ve been wondering ‘where are they now?’

As such, we have contacted the various buyers and trainers to provide an update on the ‘dazzling dozen’.

Melbourne Sale Lot 68 Colt – Rock N Roll Heaven X Blazeaway Macray – Purchased by Paul Dobson and being trained Jesse Tubbs who said: “He is moving along really well. He is a big jointed gangly horse so I think he will need time and won’t make an early two-year-old. He is doing a bit of pace work now, just going through the motions. He may have a start towards the end of the season, we’ll just see how he comes along.”

Melbourne Sale Lot 82 Colt – Four Starzzz Shark X Cherie Mctago – Purchased by Clarence Hamilton and being trained by Rodney Barker who said: “He just started fast work and goes around alright. He’s still green and immature so I’m not sure if will make a two-year-old as he is not very big either. He can be a bit ‘colty’ and I’m hoping after a break he might make a late two-year-old, but will more than likely start racing next season.”

Melbourne Sale Lot 102 Colt – A Rocknroll Dance X Gold Castle – Purchased by Ken Fulton who said: “He is being trained by Emma Stewart from whom you don’t get a lot out of at this stage, but they are happy enough with him. He has just been back for a week after five weeks off and although they can’t tell you where he is in the pecking order just yet, he’s a nice little horse. I’ve been up and watched him go around and he goes okay….I can only hope he can be another Centenario.”

Melbourne Sale Lot 169 Filly – Rock N Roll Heaven X Mystery Moment – Purchased and being trained by Ann-Jeanette Tindale who said: “I really like her. She’s a feisty filly, but great. She will go to trials and hopefully through to the races this preparation. She possesses a lot of natural speed, but still needs a bit more time so get it under control.”

Melbourne Sale Lot 117 Filly – Shadow Play X Im Living The Dream – Purchased by Ken Fulton who said: “She’s back in work, beautiful looking filly and Ian (Watson, trainer) quite likes her. Ian thinks she will make a nice two-year-old so fingers crossed it turns out that way. She has been in work for about five weeks now and we will push on with her…all things are promising at this stage!”

Melbourne Sale Lot 234 Filly – Sweet Lou X Trammell – Purchased by Peter Males and being trained by Kari and Paul Males who said: “We are really happy with her, she is a nice pacer. She’s having a little break as she’s real big, open in knees and got a lot of growing to do. Given her need to grow she will be a late two-year-old or early three-year-old, but she will definitely make it.”

Brisbane Sale Lot 44 Filly – Mr Feelgood X My Kind Of Girl – Purchased by Kay Seymour and being trained by Tobi Raeth who said: “She broke in and was going very well, but unfortunately she kicked through a fence and damaged her nearside hind leg, including the tendons. It remains to be seen how it heals up and if she will ever race.”

Melbourne Sale Lot 60 Colt – Art Major X Annas Innocent – Purchased by Justin Newbound who said: “He is being trained by Alison Alford and coming along well. He has just been out for a spell and will be back in soon with the view to trial in the next month so. He’s a clean pacer which is up and going and does everything right.”

Melbourne Sale Lot 84 Colt – Rock N Roll Heaven X Coriacea – Purchased by Reginald Brown and being trained by Melissa Maine who said: “He’s coming along well. He has had a few preps and been back in this time for about six weeks. The plan is to give him a trial by end of February. I like him as he is a nice, well put together type which paces well without much gear.”

Melbourne Sale Lot 87 Colt – Western Terror X Cold Outside – Purchased by Greg Moy who said: “Mark Hayes who broke him in felt he went along nicely. Allan Cronin is training him and after he had a preparation he was getting quite thick so we decided to geld and turn him out. He had eight or nine weeks off and has been back in fortnight. He is still quite a heavy horse, as he eats everything, but is going well. We’re anticipating he will make a two-year-old, with Southern Cross the aim.”

Brisbane Sale Lot 38 Colt – Roll With Joe X Kotare Cameo – Purchased by Ray Davis who said: “He’s going nicely…we’re very happy with him. My son Leigh is training him and he is in work at the moment and coming along well.”

Melbourne Sale Lot 181 Colt – Bettors Delight X Our Femme Fatale – Purchased by Terry Cluse and being trained on lease by Michael Brennan who said: “He was only knee high to a grasshopper and is still very small so I’ve put him in the paddock hoping he can grow a little. He shows enough to suggest he will make it. He is a lovely put together compact fella which paces and moves well. Hopefully he will be a bit of pocket rocket.”

HOOFNOTE: If you have a yearling in one of the 2019 APG Sales which has white feet please let us know.