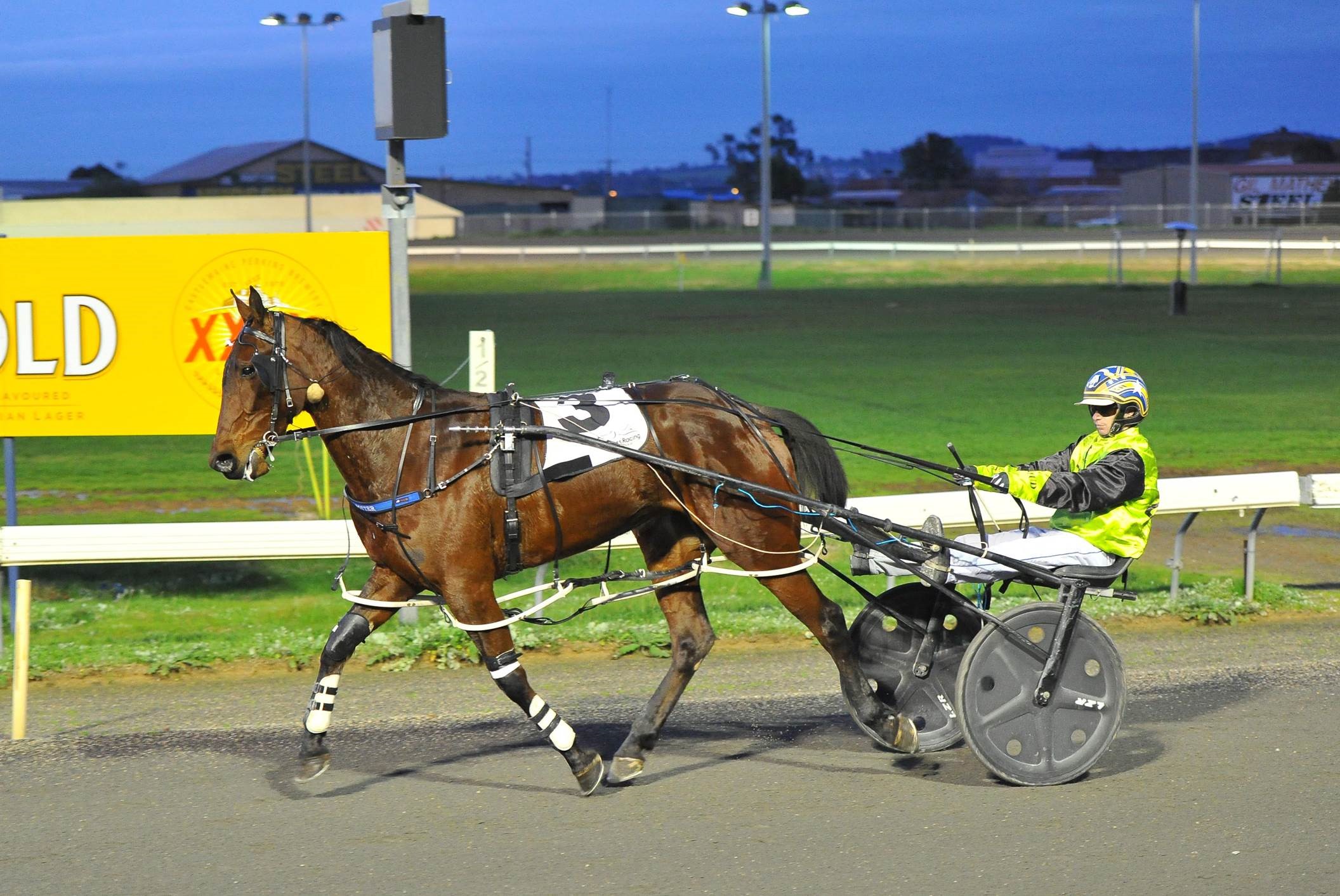 CONSISTENT mare Shadesoff hit the outright lead in the Wagga pacer of the year title on Tuesday night with her fourth win at the...

CONSISTENT mare Shadesoff hit the outright lead in the Wagga pacer of the year title on Tuesday night with her fourth win at the track this season.
Shadesoff has been a dream horse for trainer and owner Brooke McPherson winning four times at Wagga with a further three seconds and two thirds.
The mare has kept climbing up in the points tally and reached the outright lead with three meetings remaining at Wagga.
McPherson said it was her hope that Shadesoff wins the title but she would have to continue her consistency as there are other horses also in contention.
“She has been a great horse to me and runs the same consistent race every time,” she said.
“She doesn’t go as well in Victoria and always does her best at Wagga.”
McPherson has only driven Shadesoff twice for as many wins with her fiancé Tom Gilligan the regular driver.
Shadesoff was lucky to make it to the track on time when the vehicle transporting her broke down.
“It was only that Brooke was following with another float that we were able to get her to the track on time,” Gilligan said.
The breakdown meant Gilligan missed out on the winning drive of Marys Little Rose which went the way of Mark Pitt.
The Victorian reinsman won the opening race with Wicked Nights and made it a race to race double behind Marys Little Rose who finished full of running for her sixth win from 76 starts.
Trainer Troy Fletcher from Young won his first race with Marys Little Rose who had been placed at her previous two starts.
Pitt has an envious winning strike-rate at Wagga and also took out the 2014 Wagga Cup with Teo Enteo.
Wicked Night’s trainer Wayne Potter also has a second to none strike-rate at Wagga winning at his past four visits to the track.
Meanwhile, Mammals Flash made it two wins and as many seconds from four starts for trainer-driver Brian Smith when he again out stayed his rivals.
Smith has only trained Mammals Flash in recent times and is the relishing the role with the big pacer.
“He probably should have won the other two times as well and was only beaten a head and a neck,” he said.
“The owners are having a great time with him. He likes the speed on and prefers to roll along at his pace.”
Mammals Flash couldn’t find the front and raced outside of the leader Always In Command before finding the front close to the finish.
The well performed pacer looked to be struggling at the home turn but kept finding to win again for Smith who only trains the one pacer.

Club Menangle Medal ‘mid-year’ challenges from Iso...
Plans remain modest despite Group One success
Twins – only their mother can tell them apar...
Personal milestone for talented horseman
About author