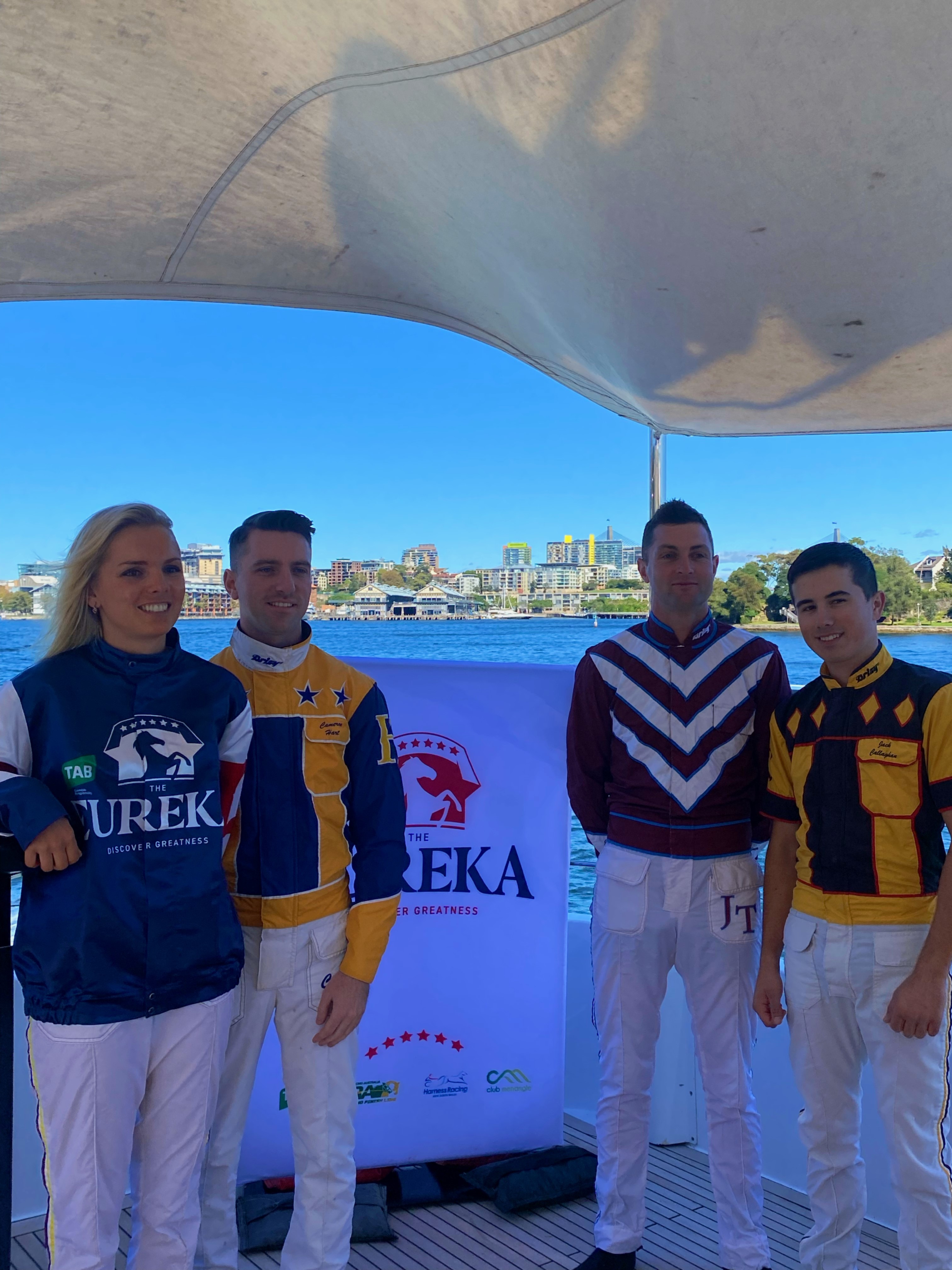 AUSTRALIA will host the world’s richest harness race.
In a lavish launch on Sydney Harbour today, Harness Racing Australia unveiled its newest race, the $2.1 million The TAB Eureka.
The inaugural running will be at Club Menangle over 2300m, starting on September 2, next year.
The TAB Eureka prize money easily trumps the purse for iconic global harness races like Sweden’s Elitlopp ($A1.67mil), France’s Prix d’Amerique ($A1.56mil), the US’s Hambletonian ($A1.3mil) and Canada’s North American Cup ($A1.3 mil).
Like thoroughbred racing’s hugely successful The Everest, The TAB Eureka will be a slot race. 10 slots will be sold at $100,000 per slot for a minimum of three years.
Advertising guru and passionate racing man John Singleton was at the launch and the first to express his interest in a slot in the The TAB Eureka.
“I want to be involved. I’ve told them I want a slot,” he said.
“I love racing and I love innovation even more. You can feel some real excitement growing again in harness racing and it deserves a race like The TAB Eureka.”
Importantly for prospective slot buyers, the majority of the prize money will be funded by Harness Racing Australia.
“We are thrilled to launch a truly aspirational Australian harness race, something which will both reward those in the industry and attract new young people into it,” Harness Racing Australia chairman Graeme Campbell OAM said.
“There is a real sense of optimism around Australian harness racing now and what better way to give that further momentum than by launching the richest (harness) race in the world.”
The race is restricted Australian-born three and four-year-old pacers.
“The TAB Eureka is unashamedly designed to grow the Australia harness racing industry. It is part of our ‘Advance Australia’ strategy to encourage owners and participants to buy Australian-born yearlings,” Campbell said.
“It will drive opportunities for local sires, generate external investment in the industry and identify new income streams.”
The TAB Eureka has stirred plenty of industry excitement from key participants, who said:
Luke McCarthy (champion NSW driver): “I’ve driven overseas and follow the biggest races really closely, so to think we’ll have the world’s richest race in our backyard is absolutely amazing.”
Kate Gath (premier Victorian driver): “I couldn’t believe it when I heard it. This is just what harness racing needs, something for us all to aim for and a race which will surely bring new people into the sport.”
Jack Callaghan (top young driver): “As a young person in the game with my whole career ahead of me, this is so exciting. And to have it in my home state (NSW) is even better.”

THE TAB EUREKA SNAPSHOT
THE TAB EUREKA – “Discover Greatness”
PRIZEMONEY: $2.1 million – World’s Richest Harness Race (including $10,000 bonus to the breeders of all runners and $30,000 bonus to connections of the first colt across the line).
SLOTS: 10 slots at $100,000 each (minimum 3-year commitment)
RACE CRITERIA: 3 & 4YO Australian-born Pacers only
WHERE: Club Menangle, NSW. Then rotates via a bidding process.
FIRST RUNNING: September 2, 2023
theeureka.com.au
Beyond Club Menangle initially hosting The TAB Eureka, there will be a bidding process for hosting rights.
“As soon as we heard about the race, we wanted (to host) it,” Club Menangle Chairman Robert Marshall said.
“We already have Australasia’s richest race, the $1 million Miracle Mile, and now we have The TAB Eureka to look forward to next year as well.”
Just as it did for The Everest, TAB has snapped-up the major naming rights sponsorship for The TAB Eureka.
“TAB is thrilled to sponsor The Eureka and we can’t wait for the inaugural running of this exciting new race next year,” Tabcorp’s Managing Director of Wagering & Media Adam Rytenskild said.
“This concept is fantastic for harness racing and there’s no doubt that punters and harness enthusiasts will love it. The fact that it will be the world’s richest harness race will create enormous interest.
“We look forward to TAB customers being involved and working with Harness Racing Australia to promote the race.

Racing on ‘hold’ as Menangle, Leeton a...
Mid-week Menangle meetings given prizemoney boost
Ladies In Red leads the Emma Stewart charge at Men...
Cash N Flow best of the Late Mail for Menangle
About author