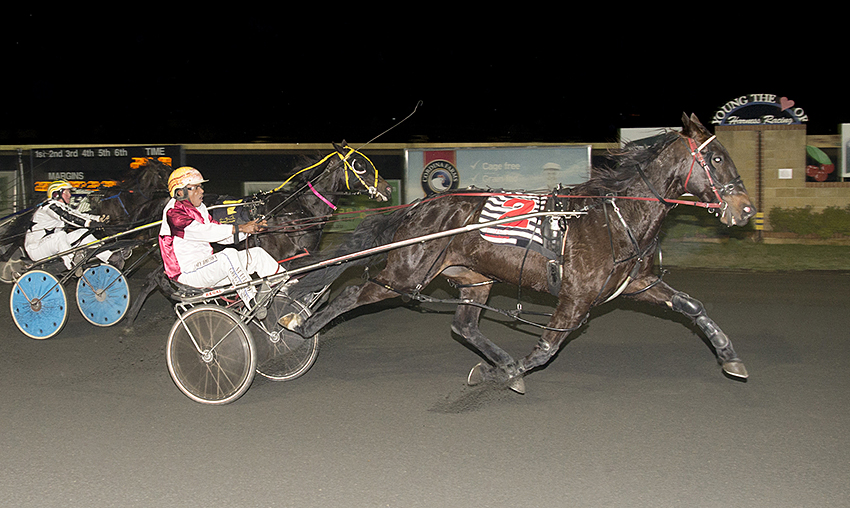 THE loss of three popular harness racing figures was enough to attract a large number of harness racing participants to Young Paceway on Friday night as the industry sought to pay its respects to local trainer drivers Ray Lennane and Ken Smith together with Grenfell’s Neville Condon.
These three men were given a minute’s silence by the big crowd before the running of Race Two.
The opening race of the night resulted in a win for the well-supported Leeton-trained Itellyounothing ($2.80), driven by Blake Jones, who proved too strong for the well-supported Cowra pacer Gold Onyx ($4.40) and pole marker Two Real ($11.30).
The winning mile rate of 2:01.1 and a margin of 1.3m in favour of the winner was an exciting start to what was to be an entertaining night’s racing.
Race two, the Vale Ken Smith Pace was taken out by the Bernie Hewitt-trained Bathurst pacer Gunna Collect ($2.50), who took full advantage of an ideal trail behind the leader in defeating the locally trained Our Apache Miss ($62.10) driven by Blake Micallef with Our Buller Boy ($95.40) claiming the minor prize for Junee trainer Terry Judd and Peter McCrae.
The mile rate of 2:01.8 was enough for the four-year-old gelding to post a 14m winning margin over his rivals and his seventh win from 70 starts.
The third of the evening, the Vale Ray Lennane Pace gave favourite backers some joy when Pump The Brakes ($1.30) overcame an early leader’s solid pace in the 2100m event.
Kyalla Stuart led from the start and ran a first quarter in 29.6s only to be headed by Pump The Brakes at the bell.
Amanda Turnbull looked to have the race won on the favourite but was given a wake-up call at the 400m mark by Matt Rue who pushed forward to be outside the leader with Our Castanea ($7.30) on straightening and shaped as a threat over the concluding stages.
It turned out to be one of the closest finishes of the night with Pump The Brakes scoring by a head with the Cowra-trained Fantasy Level ($78.90) a half-head away third.
Family and friends were trackside for the running of the Vale Nev Condon Pace, this gong to the Young-trained five-year-old gelding Bettorbetbig ($6.10) driven by Jimmy Brown for owners Narrelle and Tony Turner.
Sitting third at the bell and a solid third quarter of 29.8s set by the leader, the eventual winner defeated another local in the fast-finishing Lettuce Pray ($5.20) and Limbo Larry ($20.10) with a mile rating of 1:59.4 and a margin of three metres going in favour of the winner
Short priced favourite Girl Of The Glen ($1.40) recorded win No. 4 for Coleambally trainer Ellen Bartley and driver Blake Jones.
With Kettering Girl setting a solid pace early, posting a first quarter of 28.6s and still leading at the bell, the eventual winner was sent to the lead at the 400m mark and recorded a comfortable 6.5m win over East On Broadway ($66.90) with Kettering Girl ($5.30) third in a mile rate of 2:00.3.
Junee trainer Terry Judd was rewarded for his dedication when Shes Gifted ($2.80) finally broke through for a well-deserved win in race six.
Having faced the starter 62 times previously, the four-year-old For A Reason mare, bred by Wagga mentor Trevor Sutherland, did not let her backers down with a faultless front-running exhibition to defeat Charlie Tango ($6.80) and King Cardle ($3.80) by 9.5m in a 2:01.1 mile rate.
With a definite winter chill in the air, the three-year-olds took to the track in race seven, with Threes A Charm ($3.90) scoring for Bernie Hewitt, who drove a patient race behind pacemaker and favourite Major McCrae.
Major McCrae ($1.40) finished third with Blake Jones splitting the pair with Late Night Date ($9.80) in a mile rate of 2:01.7.
Eglinton trainer Nathan Hurst had to wait until the final race of the night to collect the big end of the purse and he certainly left nothing in the tank when Tulhurst Terror ($3.30) recorded a half-neck winning margin in his first win from 17 starts, beating last-start Albury winner Temora Reactor ($11.30) with third favourite Smiling Sam ($3.80) a neck away third.
It was certainly a great way to finish what was an emotional and befitting end to a wonderful night’s harness racing.
Young race again on Tuesday night, June 12, followed by meetings on June 19 and Tuesday night, June 26.

Another interstate trip on cards for undefeated fr...
Beginning long road back to the top
Former Aussie too slick in USA
Next 48 hours to determine semi appearance
About author