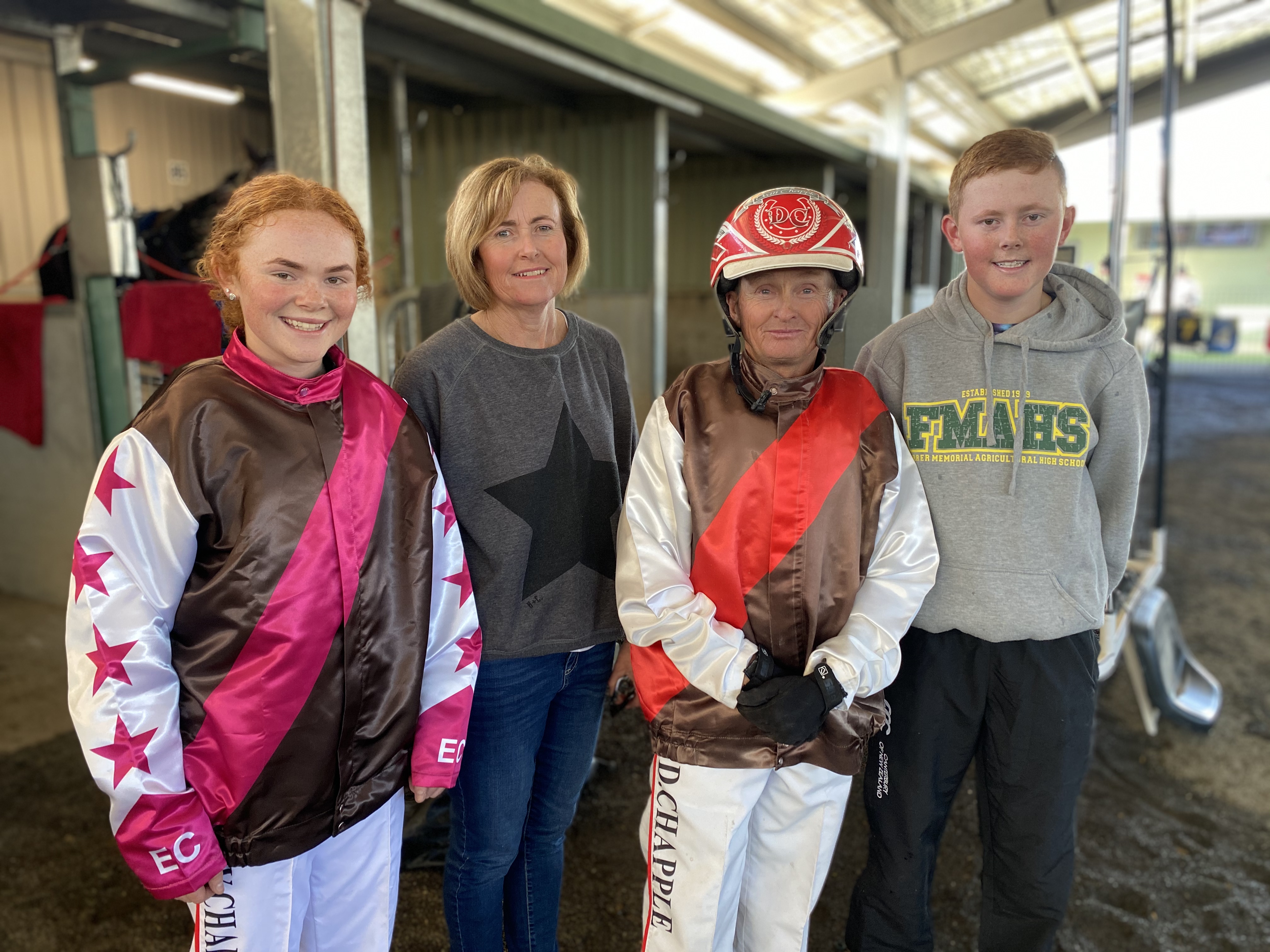 PLENTY OF SUPPORT THERE: Elly with Julie, Dean and Jack Chapple at Tamworth on Thursday. PHOTO: Julie Maughan

Youngster bounces back from horror fall

Elly Chapple3 Tamworth29
ELLY Chapple has made a gallant return to harness racing after being on the sidelines since March as a result of injuries the young...

ELLY Chapple has made a gallant return to harness racing after being on the sidelines since March as a result of injuries the young Moonbi reinswoman sustained in a horrendous race fall at an Inverell.

Chapple was knocked unconscious and sustained injuries which required her to be airlifted to Lismore Hospital, where she was found to have a broken elbow.

The 17-year-old made her return on Thursday afternoon at the Tamworth HRC meeting and even though she finished third with her charge, Apollon, it felt like a winner.

Bouncing back with more enthusiasm for her driving career, Chapple and Apollon began from the eight-barrier racing in behind Just Tommy (Sam Ison), who headed the field.

“I felt pretty good during the race and I thought we had an alright chance, but I just wanted to get around safely and see how we went,” said Chapple.

“I am extremely happy to finish third – the little boy (Apollon) looked after me and he did a good job.”

Chapple did find a split in running rounding the final turn but had to be content to finish in the minor placings with race favourite Just Tommy achieving leading all the way win in the Garrard’s Horse and Hound Pace, scoring by 3.6 metres from Alliyahs Choice (Madi Young) with Apollon three metes away third.

“When I got my clearance a couple of weeks ago, I began doing some trackwork and then I had a trial last Tuesday and today we are back at the races,” said Chapple.

“Hopefully I will be right back into it by the next meeting and see how I go from there.

“A couple of weeks after the accident I thought I wouldn’t drive again but then coming back I was left at home while everyone else went to the races so I got a bit keen, then to get back into it (racing).”

On the verge of turning 18, Elly Chapple shouted herself an early birthday present with a new set of race silks – brown with pink sash collar and brown waistband, white sleeves and pink stars cuffs with the addition of EC initials on the sleeves.

“I designed the colours myself and got them for my birthday,” she grinned.

“I tried to keep the same as my grandfather’s colours (the late Noel Maher) and changed them with a bit of pink and some stars to make them fancy,” said Chapple.

With the backing of her family to make her return to the paceway – Mum Julie, younger brother Jack and father Dean, who is an established trainer-driver – were all showing their support on the sidelines.

“It was a bit stressful but we have got that drive out of the road now,” said proud Dad Dean Chapple.

“Apollon is a perfect little horse for her.

“Elly took a lot in while she was off and she looked better in the gig and she even looked more confident than she was before . . . she did well.”