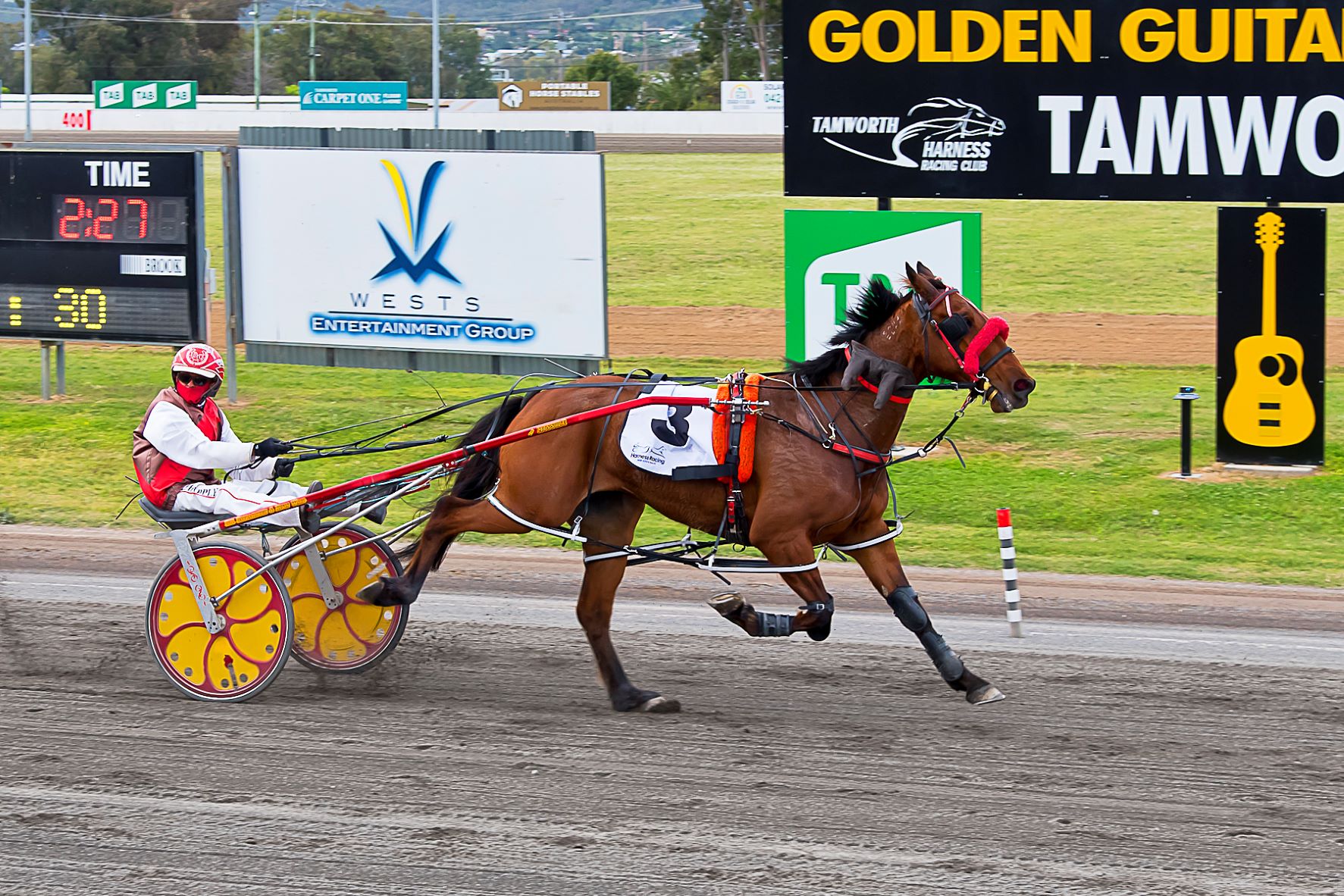 Dean Chapple7 Golden Guitar8 Tamworth29
MOONBI trainer Dean Chapple is looking for a big showing from his stable at the Carnival of Cups meeting tomorrow night at his...

MOONBI trainer Dean Chapple is looking for a big showing from his stable at the Carnival of Cups meeting tomorrow [Friday] night at his home track, Tamworth Paceway.

“We are in the Guitar Final, so that is a start,” said Chapple.

“Usually it is a race that leaves the locals out, but we are in with a chance this year.”

Asterism will begin from barrier five in the Golden Guitar Final and with Chapple himself on the sidelines due to suspension, he has called on Sydney reinsman Glenn McElhinney to take the drive.

“Glenn is the right man for the job,” said Chapple.

“He has won a Golden Guitar final before, so there are no excuses.”

McElhinney drove Emjayem Grand to win the 2010 running of the Golden Guitar Final with the horse owned and raced by local couple Mick and Kay McIlroy.

“Mick (McIIroy) owns NorWesta that is racing in the local final so I thought I would keep the partnership going,” said Chapple

“The result will come down to who has the best luck in running.

“It is a nice even field and my horse ran a good race in his heat.

“I am really looking forward to the Final.”

Asterism earned his final berth after finishing second to the Michael Formosa trained Military Man, beaten a metre with Valencia (Cameron Hart) 7.4m away third with the race run in a mile rate of 1.58.6

“Michael just got me on the line,” said Chapple .

“The Golden Guitar is a race I have always wanted to win – this is the best chance I have had in a long time,” said Chapple.

And Chapple has a four times better chance in the Hazells Tamworth Local Final with four runners in the 10-horse field.

“I eyed this race off a while ago and aimed the horses for the race,” said Chapple.

“Hazell’s are great sponsors and the race gives the locals a chance to get some money.

“All the horses have good barrier draws and all have pulled up well after their heats.”

“This horse ticks all the boxes – he has a tonne of speed and good out of the barrier,” said the trainer.

Grandview will come from barrier five, with Robbie Morris accepting the drive:

“He had to do a lot of work in his heat last week but he thrives on racing and will be better for the run.”

NorWesta will have the services of Glenn McElhinney from the seven barrier.

“The mare has been racing well but had no luck with barrier draws,” said Chapple.

Brie will round out for the stable in the Local Final from the 11 barrier with Anthony Varga to drive.

“Anthony can weave some of his magic,” added Chapple of his team.

“They will all go well.

“I have done my job with the training – it is now up to the boys on the track.”