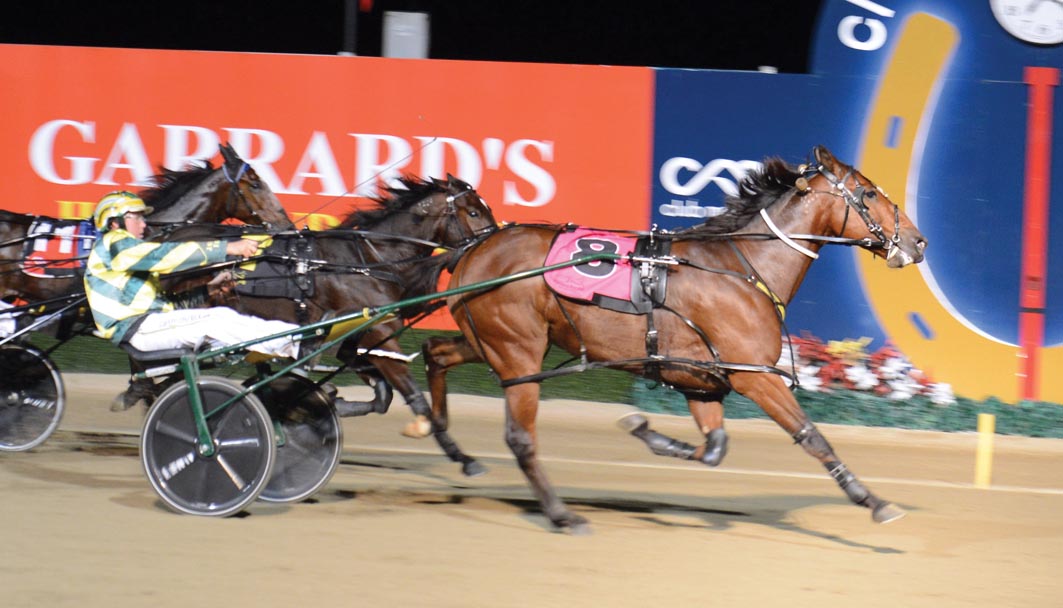 Driven by Fitzpatrick’s son Gavin, Jay Ok never looked in danger of defeat after being given a peach of a drive in the one-out and one-back trail.

When Fitzpatrick made his move rounding the home turn, Jay Ok let down quickly to race past the leaders and score by a widening five and a half metre margin, rating 1:57.2 in the process.

After having his first shot at what Gavin described as the ‘big time’, Jay Ok will be chasing his first Group 1 victory after mixing with the best of his age as a juvenile.

“It is a big step for horses to go from racing against the best of their age group to contesting the better open class races and I feel our bloke has done a great job in his first season of doing so,” said Gavin.

“We were really pleased with his performance on Sunday.

“He had such a lovely run which allowed me to leave something in the tank, which was perfect in preparation for this Saturday.

“I am not concerned about his backline draw at all as I believe he races better with a sit.

“If the leaders set a genuine pace, he should be charging home.

“Our main danger is probably Ideal Dan, who was impressive in winning his heat.

“I also thought Smooth Baht’s effort in running second in our heat was full of merit.”

The Fitzpatricks will also be represented in the Ladex Riverina Championships Mares final after the consistent Elektra qualified by finishing second behind series favourite Anntonia on Sunday.

“Elektra is a nice mare who rarely runs a bad race, but she will again have her work cut out to beat Anntonia.” Said Gavin.

“That said, she deserves her place in the final and is raced by a great bunch of owners.”

The TAB Carnival Of Cups is the feature meeting tonight for the Penrith Club, highlighted by the running of the Schweppes Renshaw Cup.

Stingray Tara is the horse to beat from gate one and has the services of ace driver Amanda Turnbull, with regular reinsman Cameron Hart away competing in New Zealand.

Trained by Jason Grimson, the gelding has won his only two starts since joining his Menangle stables.

Grayling, Blake happy to step up for injured Gav
Seven weeks after horror fall, Gav’s back in...
Gav’s chasing a hat-trick
Zeuss strikes in a flurry of lightning bolts
About author