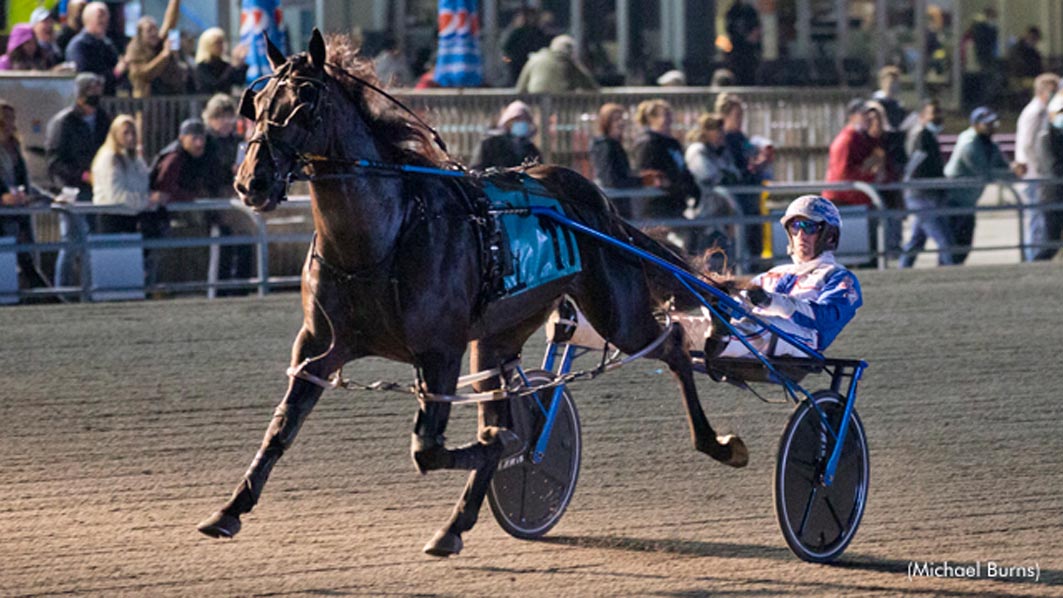 AFTER being subjected to sustained pressure from Beach Glass on the far turn, Monte Miki fought gallantly in the lane to narrowly defeat Gulf...

AFTER being subjected to sustained pressure from Beach Glass on the far turn, Monte Miki fought gallantly in the lane to narrowly defeat Gulf Shores in Friday’s $600,000 Breeders’ Crown at The Meadowlands.

Monte Miki secured the pocket behind early leaver Gulf Shores on the first turn, but when Beach Glass swept forward in the three-path through the first turn, Scott Zeron pulled Monte Miki from the pocket to overtake Gulf Shores through a 27.4-second quarter and also force Beach Glass to tuck into the three-hole — a position Zeron was hoping to avoid.

“I didn’t want to get in a bad spot” Zeron said. “I had a lot of options leaving the gate. When I got away that close, I wanted to make my way to the front and protect my spot on the first turn.”

Once in control, the son of Always B Miki  splashed through a 29 second sectional before facing intensifying pressure on the far turn — again in the form of Beach Glass, which Pebble Beach flushed into the running line with 700 metres to go.

Pebble Beach advanced to within a neck of Monte Miki nearing three-quarters in 1:26.1, but the Metro Pace winner dug in to shrug off that rival in mid-stretch.

Just as Monte Miki turned aside Beach Glass, Yannick Gingras found a lane up the pegs with Gulf Shores to take one final shot.

Nonetheless, the two-year-old colt found enough to reach the winning post a long nose in front, of Gulf Shores to seal a 1:53.2 win over sloppy going.

“This horse fights like crazy,” Zeron continued. “Once he sees another horse, he’s really game.””

Mark Evers trains Monte Miki, which has an impeccable record of six wins from seven starts for earnings of $665,276.

“We’re just really impressed with him,” Evers said. “Everything he does surprises us every week.”