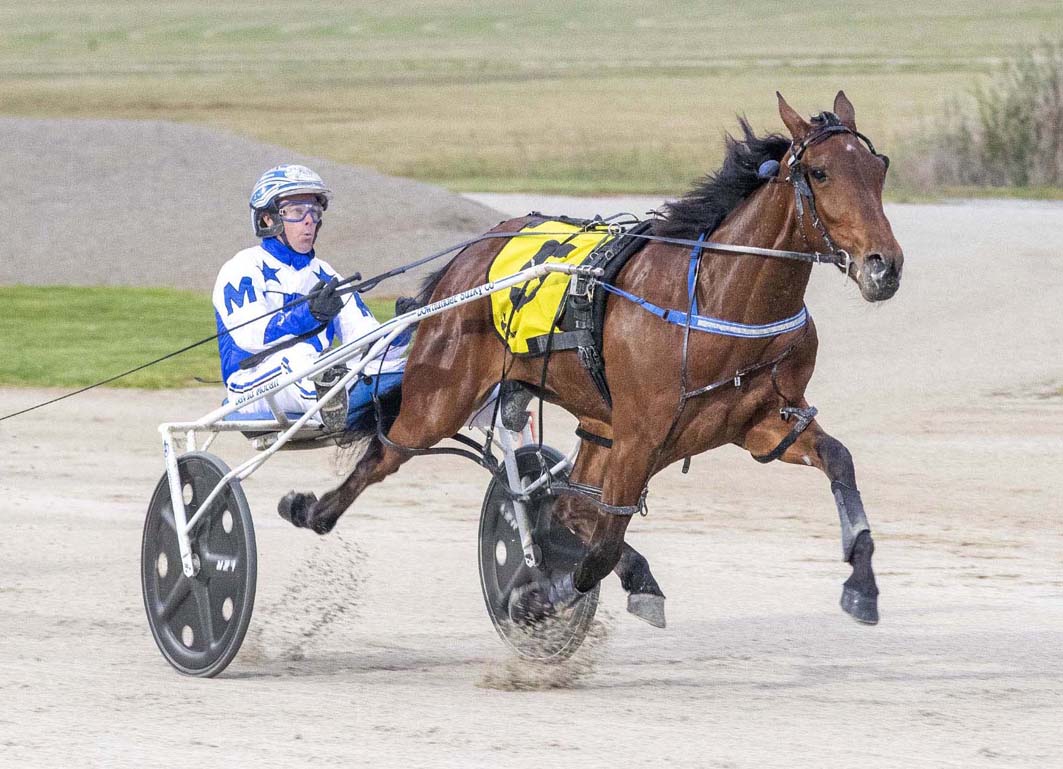 THE ONE TO BEAT: Ladies In Red.

THE TAB Breeders’ Crown is underway for 2020, with the two-year-olds tearing up the track at Ballarat as we build towards the November 21...

THE TAB Breeders’ Crown is underway for 2020, with the two-year-olds tearing up the track at Ballarat as we build towards the November 21 finals.

And it was a familiar feeling with Emma Stewart producing six of the night’s eight winners and partner Clayton Tonkin another, with the stable giving a big reminder to its claims on the Crown.

Reinsman Jason Lee guided the night’s final heat winner, Dangerous Hand, to victory for Stewart and told Trots Vision it was “nice to be teaming up with them rather than having to chase them”.

“Obviously we know how good Emma and Clayton and all their team are with all their horses, but especially their babies – they are always the ones to beat.”

Here’s how it all unfolded:

Heat one: And it was one from one for team Emma Stewart with Jacks Hawk very impressive in advancing three-wide, overpowering favourite Pantaloon and careering away to a five-metre win for reinsman David Moran.

“He’s a beautiful little horse, he’s got very high speed,” Moran told Trots Vision. “He’s a little bit wayward, he gets in and out a little bit, he’s got a fair bit to learn, but he’s got a good motor on him.”

It was a second win from four starts for the Art Major colt, who’s out of Rotkara Stella for owner-breeder Jessica Francis, and Moran said he could be dangerous as the series advanced.

“It’s going to be a great series this year, there is probably five or six really top line two-year-olds, it’s going to make it a great race,” he said. “If they all go to war, horses like Jacks Hawk, it will bring him right into it.”

The first six finishes qualify, with Spock, Dessie Gee, Sumomentsomewhere, Sayitaintso Joe and Kimble all joining Jacks Hawk in advancing to the semi-finals.

Heat two: Major Moth produced a statement win in the second heat, with reinsman Damian Wilson pressing the pedal at both ends to set up a victory for trainer Clayton Tonkin.

The Art Major colt, who’s out of Macy Lila for owner-breeders Len and Irene Parker, did work to take the lead from Keayang Kamikaze in a 40.7-second lead time, 2.5 seconds quicker than the first heat, and then gapped all challengers in a 26.8-second final quarter to win by 6.4 metres.

“It didn’t go to plan, with the one horse (Ideal Dan) galloping and the speed from outside, which I didn’t expect that much early speed, but I thought I would just poke forward and hopefully find the front, which happened,” Wilson said.

“Chris (Alford on Idyllic) come around, Amanda (Turnbull on Ideal Dan) come around and they kept me honest, but he was pretty strong on the line.

“He’s a speed horse but obviously he can do a little bit of work too, so we’ve got plenty to work with.”

Heat three: Having watched his brilliant two-year-olds recently enjoy Group 1 glory in another driver’s hands, Mick Stanley was tonight happy to be back in the sulky behind Bar Room Banta and in the midst of Victorian feature racing.

“Everyone’s gone through a tough time, but to now be running in Breeders Crown heats, we’ve had a Victoria Cup, we all feel like we’re coming out the other side,” he told Trots Vision. “Not only myself, but for everyone there’s a real buzz around that the good racing’s back.

“He got set for the New South Wales (Breeders) Challenge first and Craig Cross and Luke McCarthy did an excellent job with him and Soho Almasi up there, they were unbeaten through that. It’s really exciting to have a sit back behind him again.”

And he had good reason to be excited tonight, with Bar Room Banta extending his winning streak to six with a 1.1-metre win ahead of stablemate Soho Bollinger.

“The lead time (41.9 seconds) was pretty solid for the two-year-olds, but we got that first quarter breather (31.4 seconds) and he’s a strong, fast horse. Being on the fence I knew he’d real off some good sectionals.

“The last 400, as silly as it sounds, he was just goofing around. I had to get the plugs out and give him a tap just to wake him up because he was running off the fence thinking, ‘well, what do you want me to do’. He’s got a lot to learn, but he’s really exciting.”

The winner is A Rocknroll Dance colt out of Jerada Ace, who was bred by Ray Cahill and is owned by BFJ Bloodstock.

Bar Room Banta got home in 55.1 seconds for the last half to advance to the semi-finals along with Soho Bollinger, Swayzee, Watts Up Sunshine, Platinum Stride and Act Now.

Owned and bred by Bruce and Vicki Edward, the two-year-old Bettors Delight colt out of Whatahottie has now won four of his five starts.

“Back off the front row tonight, I was always extremely confident with him,” Sugars said.

“He was pretty strong at the finish. He got a bit casual in chasing to the line, (had) just to keep his mind right on the job.”

Beyond Delight was unchallenged, winning by 9.3 metres and giving Sugars confidence he had “a lot left in the locker if he had have been challenged” when he kicked up after they crossed the finishing line as other horses drew near. That prompted the reinsman to take an unscheduled victory lap.

“He had a horse up along side him and still wanted to keep racing it, so bascially got to the back straight by the time I pulled up, I thought much of a muchness here, which is the quickest way home, so I kept going.”

It was perhaps a further sign of the lightly-raced colt’s continual education, which Sugars said gave him optimism that the best was certainly yet to come.

“Day one when the first time I drove him at trials he was pretty green but showed really good speed, but just a bit wayward,” he said. “That’s probably been his biggest thing, his manners have certainly come a long, long way this time in. There’s still a bit of room for improvement in him.

“It’s all good signs, because if he’s not 100 per cent manners wise as a racehorse, as they iron them out he’s only going to get better. That’s a good thing.”

Beyond Delight was joined in advancing to the November 14 semi-finals by Mach Hammer, Rock N Roll Doo, Go Dancing, Drain The Swamp and Spring In His Step.

Heat one: Emma Stewart’s two-year-old fillies have been outstanding to date and that looks like rolling through this year’s TAB Breeders Crown, with Group 1 winner Joanna adding a fourth win in her sixth start and holding at bay highly-rated stablemate Treachery.

The Balthurst Gold Tiara winner led from gate six, with Treachery sitting in the breeze for the last lap and a half, an advantage Joanna made count in holding on to win by 1.3 metres for reinswoman Amanda Turnbull.

“She’s a great filly, she’s done a great job already and she’s just starting to get fit,” Turnbull said of the Somebeachsomewhere filly, who breeder Mark Carey paired with dam Repellem and sold to owners Danny and Jo Zavitsanos and Warren Viney.

“She just doesn’t know when to stop. I know when she won the Group 1 she got attacked the whole way and just never looked like stopping.

“She loves that, she loves a little bit of a war. She goes to sleep straight away and then she will take off again. That’s the best bit about her, she is so fast but she can hold it as well.”

She did just that to win in a 54.5-second last half, with Star Of Timpany and Momentslikethese closing well late to finish third and fourth respectively behind Joanna and Treachery.

Also advancing to the November 14 semi-finals were Dougs Babe, Town Echo, Let It Linga and Outa The Blue.

Heat two: There doesn’t look a huge amount between Emma Stewart’s leading two-year-old fillies but time and again it’s Ladies In Red who separated herself from the pack.

The full sister to Our Little General ($712,852), being by Mach Three out of Kabbalah Karen B for owner-breeders Lauriston Bloodstock, Ladies In Red recorded a 2.6-metre win to score ahead of stablemates Tough Tilly and Rogue Wave, who were again valiant in defeat.

Winning reinsman David Moran said driving Ladies In Red, a winner of all five of her starts, was a “pretty special feeling”.

“She just drops the bit and is the most kindest filly to drive, which is going to in time just make her the perfect racehorse,” he said. “She’s got such high speed but she can tough it out as well.”

Drawn inside the back row, Moran quickly moved to the running line and then circled into the breeze outside leader Eva Mateo.

When the latter tired Ladies In Red assumed the lead and held off her stablemates to score in a 26.2-second last quarter.

“It panned out pretty good in the end,” Moran said. “They seemed to settle pretty quick, there wasn’t a hell of a lot of speed early on in the race, so I thought there was a good chance to get around and dictate the race from there and just control it to our own speed.”

And he lost no respect for Tough Tilly, who again boxed on well for Kate Gath from a difficult draw.

“(Tough Tilly’s) a beautiful little filly, if you reverse the roles or reverse the draws, it’s going to be a great couple of races coming up over the next few weeks because if she drew to find the front she’s going to be mighty hard to beat.”

Joining Ladies In Red, Tough Tilly and Rogue Wave in advancing to the semi-final were Sahara Storm, Treasure Rainbow, Jo Rocks, No Win No Worries and Covered Kylie.

Heat three: Dangerous Hand made it six wins from the night’s eight heats for Emma Stewart when she found the front for reinsman Jason Lee, holding stablemate Platinum Sparkle at bay to score by a neck.

By Captaintreacherous out of Mitzi M Hanover, the win would have thrilled breeder Helen Head and the filly’s big ownership group, who watched her rattle home in 27.4 seconds to register the narrow win.

“I thought we were a genuine chance tonight, we just had to get her out as good as we could and just hope we ended up in a good position,” Lee told Trots Vision. “The front was there in the end, she was good.

“We’re all here to race, but it is only a heat. If it was the final it would have been a bit more genuine I reckon, but you take what you can get, she did a good job and had a good one on her back (in Platinum Sparkle) and had to hold her off.”

And, like all of tonight’s runners, she should only get better as the stakes rise.

“She’s only had a handful of starts, she’s still pretty green, so she will benefit from that and look forward to next week.”

With the win she advances to the November 14 semi-finals along with Platinum Sparkle, Soho Broadway, Soho Almasi, Cashflow Cassie, Holi Starzzz, Blaze Coops and Jaziah.

The TAB Breeders Crown continues with the three-year-old heats at Bendigo on Friday night.